The document NCERT Exemplars - Semiconductor Electronics (Part - 2) Notes | EduRev is a part of the JEE Course JEE Revision Notes.
All you need of JEE at this link: JEE

Q.17. Why are elemental dopants for Silicon or Germanium usually chosen from group XIII or group XV?Ans. When pure semiconductor material is mixed with small amounts of certain specific impurities with valency different from that of the parent material, the number of mobile electrons/holes drastically changes. The process of addition of impurity is called doping. The size of the dopant atom should be compatible such that their presence in the pure semiconductor does not distort the semiconductor but easily contribute the charge carriers on forming covalent bonds with Silicon or Germanium atoms, which are provided by group XIII or group XV elements.Q.18. Sn, C, and Si, Ge are all group XIV elements. Yet, Sn is a conductor, C is an insulator while Si and Ge are semiconductors. Why?Ans. The conduction level of any element depends on the energy gap between its conduction band and valence band.In conductors, there is no energy gap between conduction band and valence band. For insulator, the energy gap is large and for semiconductor the energy gap is moderate.The energy gap for Sn is 0 eV, for C is 5.4 eV, for Si is 1.1 eV and for Ge is 0.7 eV related to their atomic size. Therefore Sn is a conductor, C is an insulator, and Ge and Si are semiconductorsQ.19. Can the potential barrier across a p-n junction be measured by simply connecting a voltmeter across the junction?Ans. We cannot measure the potential barrier across a p-n junction by a voltmeter because the resistance of voltmeter is very high as compared to the junction resistance. Potential of potential barrier for Ge is VB = 0.3 V and for silicon is VB = 0.7 V.On the average the potential barrier in P-N junction is ~0.5 V.

Q.20. Draw the output waveform across the resistor (Figure).

Q.21. The amplifiers X, Y and Z are connected in series. If the voltage gains of X, Y and Z are 10, 20 and 30, respectively and the input signal is 1 mV peak value, then what is the output signal voltage (peak value)(i) if dc supply voltage is 10V?(ii) if dc supply voltage is 5V?Ans. Total voltage amplification is defined as the ratio of output signal voltage and input signal voltage.According to the problem, voltage gain in X, vx = 10,voltage gain in Y; vy = 20,voltage gain in Z, vz, = 30;ΔVi = 1 mV = 10-3 VAnd Total voltage amplification = vx * vy * vz,ΔV0 = vx * vy * vz * ΔVi= 10 *20 * 30 * 10-3 = 6V(i) If DC supply voltage is 10 V, then output is 6 V, since theoretical gain is equal to practical gain, i.e., output can never be greater than 6 V.(ii) If DC supply voltage is 5 V, i.e., Vcc = 5 V. Then, output peak will not exceed 5 V. Hence V0 = 5 V.Q.22. In a CE transistor amplifier there is a current and voltage gain associated with the circuit. In other words there is a power gain.Considering power a measure of energy, does the circuit violate  conservation of energy?Ans. Key Concept: Different gain in CE transistor amplifier.(i) ac current  gain:

The power gain is very high in CE transistor amplifier. In this circuit, the extra power required for amplified output is obtained from DC source. Thus, the circuit used does not violate the law of conservation. 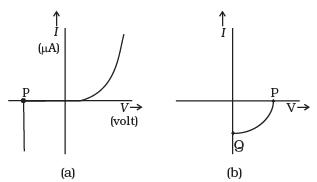 (i) Name the type of a diode whose characteristics are shown in Figure (A) and Fig. (B). (ii) What does the point P in Figure (A) represent? (iii) What does the points P and Q in Figure (B) represent?Ans.(i) Figure (a) represents the characteristics of Zener diode and curve (b) is of solar cell.(ii) In figure (a), point P represents Zener breakdown voltage.(iii) In figure (b), the point Q represents zero voltage and negative current. Which means the light falling on solar cell with atleast minimum threshold frequency gives the current in opposite direction to that due to a battery connected to solar cell. But for the point Q the battery is short circuited. Hence it represents the short circuit current.And the point Pin figure (b) represents some open circuit, voltage on solar cell with zero current through solar cell.It means, there is a battery connected to a solar cell which gives rise to the equal and opposite current to that in solar cell by virtue of light falling on it.Q.24. Three photo diodes D1, D2 and D3 are made of semiconductors having band gaps of 2.5 eV, 2 eV and 3 eV, respectively. Which ones will be able to detect light of wavelength

According to the problem,Wavelength of light

energy of the light photon

The incident radiation which is detected by the photodiode D2 because energy of incident radiation is greater than the band-gap.Q.25. If the resistance R1 is increased (Figure), how will the readings of the ammeter and voltmeter change?

Ans. Let us redrawn the circuit diagram to find the change in reading of ammeter and voltmeter. 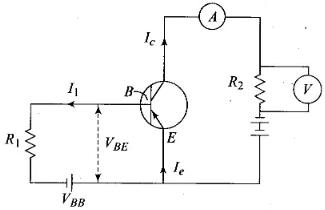 So, R1 is increased, IB is decreased.Now, the current in ammeter is collector current IC.IC = βIB as IB is decreased, IC is also decreased and the reading of voltmeter and ammeter also decreased.Q.26. Two car garages have a common gate which needs to open automatically when a car enters either of the garages or cars enter both. Devise a circuit that resembles this situation using diodes for this situation.Ans. As car enters in either of the garages or both, the common gate opened automatically.This means that if any one input is high, output will high otherwise low.The device is shown like this:

So, OR gate gives the desired output

Q.27. How would you set up a circuit to obtain NOT gate using a transistor?Ans.(1) It has only one input and only one output.(2) Boolean expression is Y = Ᾱ and is read as “y equals not A” .Logical symbol of NOT gate. Specially designed diodes, which give out light radiations when forward biases. LED 's are made of GaAsp, Gap etc.These are forward biased P-N junctions which emits spontaneous radiation.In elemental semiconductor, the band gap is such that the emission arc in infrared region and not in visible region.

Q.29. Write the truth table for the circuit shown in Figure. Name the gate that the circuit resembles.

Logical Symbol of AND gateThis is 'AND' Gate and its characteristics are as follows:
(1) it has two inputs (A and B) and only one output (Y)
(2) Boolean expression is Y = A.B is read as "Y equals A AND B"
(3) Realization of AND gate 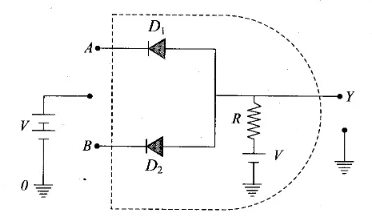 Q.30. A Zener of power rating 1 W is to be used as a voltage regulator. If zener has a breakdown of 5V  and it has to regulate voltage which fluctuated between 3V and 7V, what should be the value of Rs for safe operation (Figure)?

for safe operations Rs will be equal to

Q.31. If each diode in Figure has a forward bias resistance of 25Ω and infinite resistance in reverse bias, what will be the values of the current I1, I2, I3 and I4?

Q.32. In the circuit shown in Figure when the input voltage of the base resistance is 10 V, Vbe is zero and Vce is also zero. Find the values of Ib, Ic and β.

Q.33 Draw the output signals C1 and C2 in the given combination of gates (Figure). 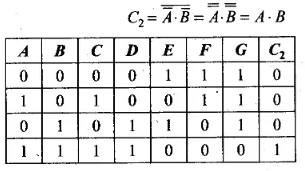 Q.34. Consider the circuit arrangement shown in Figure (a) for studying input and output characteristics of npn transistor in CE configuration. Select the values of RB and RC for a transistor whose VBE = 0.7 V, so that the transistor is operating at point Q as shown in the characteristics shown in Figure (b).
Given that the input impedance of the transistor is very small and VCC = VBB = 16 V, also find the voltage gain and power gain of circuit making appropriate assumptions.
Ans. For output characteristic at point Q
VCE = 8V, IB = 30 μA, IC = 4 mA, VBE = 0.7V
Applying Kirchhoff’s law in collector-emitter loop
VCC=VCE+RCIC

(-) sign shows change in phase angle of output is by input voltage.

Q.35. Assuming the ideal diode, draw the output waveform for the circuit given in Figure Explain the waveform. 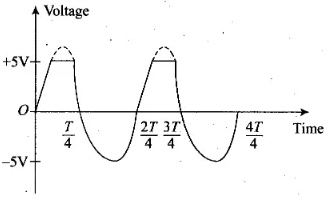 Q.36. Suppose a ‘n’-type wafer is created by doping Si crystal having 5 × 1028 atoms/m3 with 1ppm concentration of As. On the surface 200 ppm Boron is added to create ‘P’ region in this wafer. Considering nt = 1.5 × 1016 m–3,
(i) Calculate the densities of the charge carriers in the n & p regions.
(ii) Comment which charge carriers would contribute largely for the reverse saturation current when diode is reverse biased.
Ans.
When As (pentavalent) is added to Si the n-type water is created.
So the number of majority carriers in n-type water,

For number of minority carriers nh

It is represented by following logic relation

Build this gate using AND, OR and NOT gates.
Ans. XOR gate can be realized by the combination of two NOT gates, two AND gates and one OR gate. According to the problem, the logic relation for the . given truth table is
When

Q.38. Consider a box with three terminals on top of it as shown in Figure (a):

(b)The student obtains graphs of current-voltage characteristics for unknown combination of components between the two terminals connected in the circuit.
The graphs are
(i) when A is positive and B is negative

(c)(ii) when A is negative and B is positive

(d)(iii) When B is negative and C is positive

(e)(iv) When B is positive and C is negative

(f)(v) When A is positive and C is negative

(g)(vi) When A is negative and C is positive Ans. Let us redraw the circuit diagram given here to solve this problem. Q.40. In the circuit shown in Figure, find the value of RC.