The document NCERT Gist: Natural Vegetation (Part - 2) Notes | EduRev is a part of the UPSC Course Famous Books for UPSC Exam (Summary & Tests).
All you need of UPSC at this link: UPSC
Farm ForestryFarm forestry is a term applied to the process under which farmers grow trees for commercial and non-commercial purposes on their farm lands.
WildlifeWildlife of India is a great natural heritage. It is estimated that about 4-5 per cent of all known plant and animal species on the earth are found in India. There are certain species that are at the brink of extinction.

Some estimates suggest that at least 10 per cent of India’s recorded wild flora and 20 per cent of its mammals are on the threatened list.

Let us now understand the different categories of existing plants and animal species.

Based on the International Union for Conservation of Nature and Natural Resources (IUCN), we can classify as follows 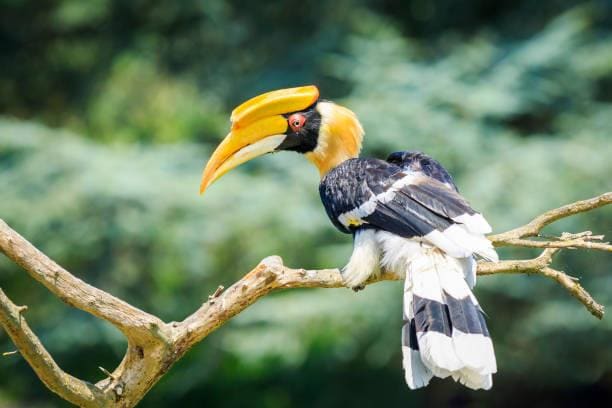 Hornbill
Endemic Species: These are species which are only found in some particular areas usually isolated by natural or geographical barriers. Examples of such species are the Andaman teal, Nicobar pigeon, Andaman wild pig, mithun in Arunachal Pradesh. (i) Nilgiri Biosphere Reserve: The Nilgiri Biosphere Reserve (NBR), the first of the fourteen biosphere reserves of India, was established in September 1986. It embraces the sanctuary complex of Wayanad, Nagarhole, Bandipur and Mudumalai, the entire forested hill slopes of Nilambur, the Upper Nilgiri plateau, Silent Valley and the Siruvani hills. The total area of the biosphere reserve is around 5,520 sq. km. The Nilgiri Biosphere Reserve possesses different habitat types, unspoilt areas of natural vegetation types with several dry scrubs, dry and moist deciduous, semi evergreen and wet evergreen forests, evergreen shoals, grasslands and swamps. It includes the largest known population of two endangered animal species, namely the Nilgiri Tahr and the Lion-tailed macaque. The largest south Indian population of elephant, tiger, gaur, sambar and chital as well as a good number of endemic and endangered plants are also found in this reserve. The habitat of a number of tribal groups remarkable for the traditional modes of harmonious use of the environment are also found here. The topography of the NBR is extremely varied, ranging from an altitude of 250 m to 2,650 m. About 80 per cent of the flowering plants reported from the Western Ghats occur in the Nilgiri Biosphere Reserve.

Major threats to the ecosystem are the collection of endangered plants for medicinal use, forest fires and poaching. (iii) Sunderbans Biosphere Reserve: It is located in the swampy delta of the river Ganga in West Bengal. It extends over a vast area of 9,630 sq. km. and consists of mangrove forests, swamps and forested islands. Sundarbans is the home of nearly 200 Royal Bengal tigers. The tangled mass of roots of mangrove trees provide safe homes for a large number of species, from fish to shrimp. More than 170 birds species are known to inhabit these mangrove forests. Adapting itself to the saline and fresh water environment, the tigers at the park are good swimmers, and they hunt scarce preys such as chital deer, barking deer, wild pig and even macaques. In the Sunderbans, the mangrove forests are characterized by Heritiera fomes, a species valued for its timber.

(iv) Gulf of Mannar Biosphere Reserve: The Gulf of Mannar Biosphere Reserve covers an area of 105,000 hectares on the southeast coast of India. It is one of the world’s richest regions from a marine biodiversity perspective. The biosphere reserve comprises 21 islands with estuaries, beaches, forests of the near shore environment, sea grasses, coral reefs, salt marshes and mangroves. Among the Gulf’s 3,600 plant and animal species are the globally endangered sea cow (Dugong / dugon) and six mangrove species, endemic to Peninsular India.