The document NCERT Gist: THE DELHI SULTANATE UPSC Notes | EduRev is a part of the UPSC Course History for UPSC (Civil Services) Prelims.
All you need of UPSC at this link: UPSC
Struggle for the Establishment of a Strong Monarchy

Muizzuddin (Muhammad Ghori) was suceeded (1206) by Qutbuddin Aibak, Turkish slave who had played an important part in the expansion of the Turkish Sultanat in India after the battle of Tarain. Another slave of Muizzuddin, Yalduz, succeeded at Ghazni. As the ruler of Ghazni, Yalduz claimed to rule over Delhi as well. This, however was not accepted by Aibak and from this time, the Delhi Sultanat severed its helped to Prevent India being drawn into central Asian politics.

AFTER THE death of Balban in 1286, there was again confusion in Delhi for some time. Balban’s chosen successor. Prince Muhammad, had died earlier in a battle with the Mongols. A second son, Bughra Khan, pref erred to rule over Bengal and Bihar although he was invited by the nobles at Delhi to assume the throne. Hence, a grandson of Balban was installed in Delhi. But he was too young and inexperienced to cope with the situated. In the early 14th century, the Delhi Sultanate ruler Alauddin Khalji (r. 1296-1316) instituted price controls and related reforms in his empire. He was the second and the most powerful ruler of the Khalji dynasty that ruled the Delhi Sultanate in the Indian subcontinent. 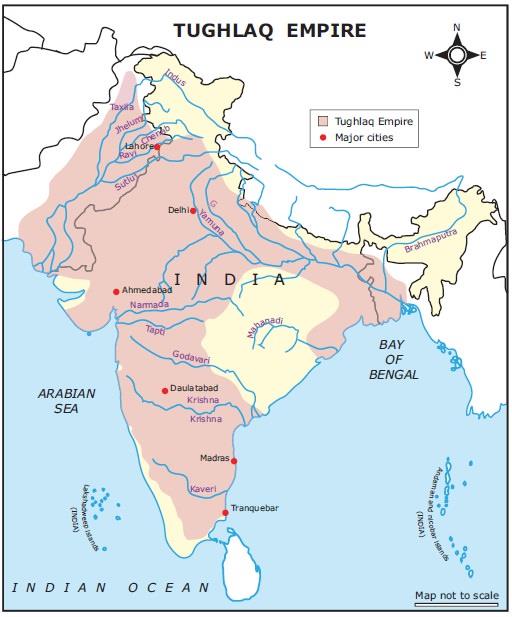 Question 3:With reference to Tughlaq dynasty, what is kharaj tax which was paid by non-muslims?
Explanation

Firoz Tughlaq: Firoz Shah Tughlaq was the cousin brother of Muhammad Bin Tughlaq, and became the ruler of Delhi on 23rd march 1351 A.D. He imposed only four taxes sanctioned by Islamic viz., kharaj (land tax), khams (1/5 of the looted property during wars), Jizya (religious tax on the Hindus), and Zakat (2½per cent of the income of the Muslims which was spent for the welfare of Muslim subjects and their religion). He imposed irrigation tax after getting it sanctioned from the Ulema.