The document NCERT Notes: Human Reproduction Notes | Study Biology Class 12 - NEET is a part of the NEET Course Biology Class 12.
All you need of NEET at this link: NEET

IntroductionHumans are sexually reproducing and viviparous. The reproductive events in humans include formation of gametes (gametogenesis), i.e., sperms in males and ovum in females, transfer of sperms into the female genital tract (insemination) and fusion of male and female gametes (fertilisation) leading to formation of zygote. This is followed by formation and development of blastocyst and its attachment to the uterine wall (implantation), embryonic development (gestation) and delivery of the baby (parturition)

Male Reproductive SystemMale reproductive system is located in the pelvis region. It Consists of – a pair of testis, glands, accessory ducts, external genitalia.

Female Reproductive SystemFemale reproductive system is located in the pelvic region. It consists of - a pair of ovaries, a pair of oviducts, uterus, cervix, vagina and the external genitalia. A pair of mammary glands is also integrated structurally and functionally with the parts of female reproductive system to support the process of ovulation, fertilization, gestation, parturition and care of the baby after birth. A pair of oviducts, uterus, cervix, vagina constitute the female accessory ducts.

GametogenesisThe process of formation of gametes in primary sex organs is called Gametogenesis.

The process of formation of sperms is called spermatogenesis. It involves 3 phases-

The conversion of spermatids into sperms is called spermiogenesis.The process of formation of a mature female gamete is called oogenesis.

Structure of A Sperm 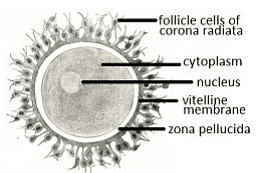 In human beings, menstrual cycles ceases around 50 years of age and known as menopause.

Cortical reaction(a) Immediately after the entry of a sperm into the egg, the later shows a cortical reaction to check the entry of more sperms.(b) In this reaction, the cortical granules present beneath the egg’s plasma membrane release chemical substance between the ooplasm and the plasma membrane (vitelline membrane).(c) These substances raise the vitelline membrane above the egg surface. The elevated vitelline membrane is called fertilization membrane.(d) The increased space between the ooplasm and the fertilization membrane and the chemical present in it effectively check the entry of other sperm.(e) If polyspermy occurs, that is more than one sperm enter the secondary oocyte, the resulting cell has too much genetic material to develop normally

The document NCERT Notes: Human Reproduction Notes | Study Biology Class 12 - NEET is a part of the NEET Course Biology Class 12.
All you need of NEET at this link: NEET