The document NCERT Notes: Sexual Reproduction in Flowering Plants Notes | Study Biology Class 12 - NEET is a part of the NEET Course Biology Class 12.
All you need of NEET at this link: NEET

Reproduction ensures continuity of species generation after generations as the older individuals undergo senescence and die. Flowering plants shows sexual mode of reproduction and bears complex reproductive units as male and female reproductive units along with accessary structures.Flower is a modified stem which functions as a reproductive organ and produces ova and/or pollen. A typical angiospermic flower consists of four whorls of floral appendages attached on the receptacle: calyx, corolla, androecium (male reproductive organ consisting of stamens) and gynoecium (composed of ovary, style and stigma). 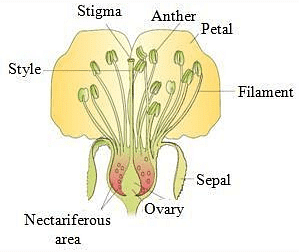 Pollen grain represents the male gametophytes. Pollen grains are made of 2 layered Wall, 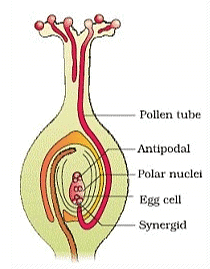 Post fertilisation events include endosperm and embryo development, maturation of ovules into seeds and ovary into fruits.Endosperm– the primary endosperm cell divides many time to forms triploid endosperm tissue having reserve food materials.

Embryo- Embryo develops at the micropylar end of the embryo sac where the zygote is located.Embryogeny – early stages of embryo development.The zygote gives rise to the proembryo and subsequently to the globular, heart-shaped and mature embryo.

Some angiosperms produce more than one embryo in a seed. This is known as polyembryony. It was first noticed by Lewenhoek in seeds of oranges.

Various types of polyembryony are:

The document NCERT Notes: Sexual Reproduction in Flowering Plants Notes | Study Biology Class 12 - NEET is a part of the NEET Course Biology Class 12.
All you need of NEET at this link: NEET