1. Match the map and the photo

(1) Have you seen a map of a city? Look at Map 1. Match it with the photo and find out where India Gate is. Draw it on the map.

(2) Some roads are shown in this part of the map. Look for them in the photo.

(3) Name roads that you will cross on your way from Rashtrapati Bhawan to India Gate.

(4) Look for the National Stadium in Map 1. Can you see it in the photo?

(1) Yes, I have seen the map of the city. On matching the Map 1 with the photo we find the position of India Gate is drawn on the map as shown.

(2) The road shown in this part of the map are clearly visible in the photo.

(3) The names of the roads crossed on our way from Rashtrapati Bhawan to India Gate are Rafi Marg, Janpath and Man Singh Road.

(4) The National Stadium is seen in Map1. I cannot see it in the photo.

2. The Central Hexagon If we ‘zoom in’ to look more closely at one part of the map, it looks like this. 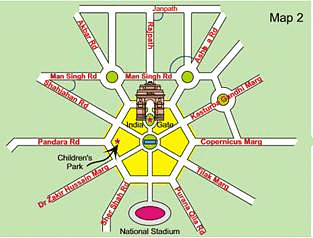 Look at the shape of the yellow area. Have you seen this shape before? How many sides does it have? This place is called the Central Hexagon.

Find out from the map

(a) If you are walking on Rajpath then after India Gate on which side would Children Park be?

(a) While walking on Rajpath then after India Gate the Children Park falls on the right side.

(b) Which of these roads make the biggest angle between them?

(ii) Ashoka Road and Man Singh Road (the angle away from India Gate).

Ans. (b) Ashoka Road and Man Singh Road make the biggest angle between them.

(c) Which of the above pairs of roads cut at right angles? 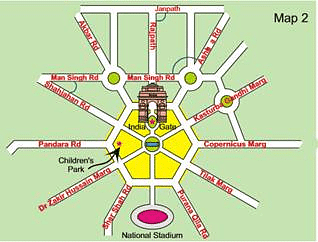 (1) Trace the route of the parade in Map 3 and Unmark India Gate and Rajpath.

(1) The route of the parade has been marked in Map 3.  The India Gate and Rajpath has also been marked as desired in the above Map.

(2)  Look at the map carefully and find out:

(a) Which of these is the longest road?

(a) Tilak Marg is the longest road.

(b) If Rubia is coming from Jama Masjid to join the parade, guess about how far she will have to walk.

(b) Rubia is to walk about 1 km to join the parade.

(c) The total route of the parade is about how long?

(c) The total route of the parade is about 16km. 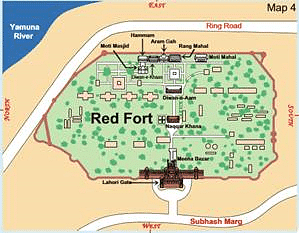 (a) Which of these is nearer to river Yamuna? – the Diwan-e-Azam or the Diwa-e-Khas?

(a) The Diwan-e-Khaas is nearer to river Yamuna than the Diwan-e-aam.

(b) Between which two buildings is Aarma Gah?

(b) Between the Diwan-e-Khaas and Rang Mahal lies the Aaram Gah.

(c) Which buildings do you pass while going from Rang Mahal to the Hammam?

(c) While goind from Rang Mahal to Hammam we pass Aaram Gah, the Diwan-e-Khaas and Moti Masjid.

(d) Which building on this map is farthest from Meena Bazaar?

(e) About how far is Lahori Gate from Diwan-e-Khaas?

5. Look at the map of India below and find the states these children are talking about. Answer the questions: 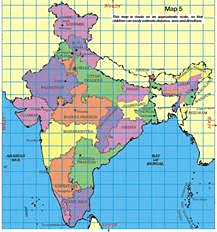 (1) The Karnataka team starts from Banglore and moves in the north direction. Which states does it cross to reach delhi?

(1) To reach Delhi from Banglore (Karnataka) the team has to cross the state of Maharasthra, Madhya Pardesh and Uttar Pardesh (or Rajasthan and Haryana).

(2) Jammu and Kashmir is to the north of Delhi so the team from there travels towards south to reach Delhi. Which states does it cross?

(2) To reach Delhi from Jammu and Kashmir the team has to cross the states of Himachal Pardesh, Punjab and Haryana.

(3) Nonu lives in Gujarat. Nonu’s friend Javed lives in West Bengal. Nonu wants to visit his friend. In which direction will he travel.

(3) West Bengal is the east of Gujarat, so Nonu has to travel towards east to reach West Bengal to meet his friend Javed.

(4) Is there any state which is to the north to Jammu and Kashmir?

(4) There is no state to the north of Jammu and Kashmir.

(5) Is there any state which is to the west of Gujarat?

(5) There is no state to the West of Gujarat.

A. About how far is Delhi from Jaipur?

Delhi is about 250 km from Jaipur.

B. Estimate, how far is Jaipur from Bhopal?

Estimate of Jaipur from Bhopal:

(a) Which state is surrounded by four other states?

(a) Madhya Pardesh is surrounded by four other states.

(b) Which state has the largest area? If its name is not in the map, find it from your teachers or parents.

(b) Tamil Nadu has the largest area. Just looking at the map one can find the state having largest ground occupied on the map.

(c) Which state is about 8 times bigger in area then Sikkim?

(c) Uttrakhand is about 8 times bigger than Sikkim.

(d) About how many times to Punjab is the area of Sikkim?

(d) Rajasthan is about 7 times of Punjab.

Bala is standing on the sea-coast and looking at the vast sea. The sea looks endless.

Have you seen the sea? In the picture where is the sea? Now look for the sea in the    map of India. What colour is used to show the sea?

(a) Mark those states which have the sea on one side?

(a) The states of Gujarat, Maharashtra, Karnataka, Kerela, Tamil Nadu and West Bengal have the sea on their one side.

(b) Name one state which does not have the sea on any side.

(b) Madhya Pardesh does not have the sea on any of side.

These are five town. Find out:

(a) How may cm away is Idlipur from Barfinagar on the map?

(a) Distance between Idlipur and Barfinagar on the map = 4.7 cm.

(b) How many kilometres will have to travel if you go from Idlipur to Barfinagar?

(c) There is a place called Thukapagram midway between Idlipur and Barfinagar. Mark it with a ‘T’.

(d) Measure the length of the route between Bhelpur and Chholaghat. 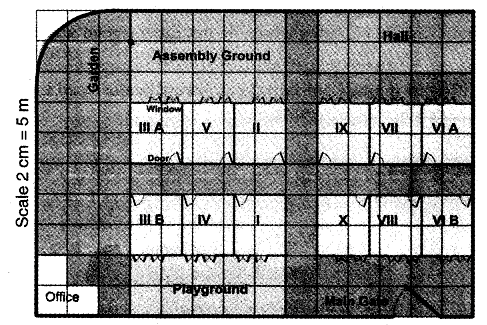 Use the squares to find out:

(A) How many times bigger is the area of the assembly ground than that of the office?

(A) The area of the Assembly ground is 5 times that of the office.

(B) How much is the length and width of each classroom?

(C) All the classrooms in Ashi’s school look like this. 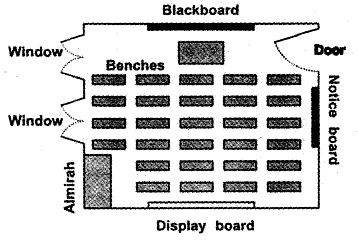 (a) Which of these is exactly opposite to the blackboard?

(a) Display board is exactly opposite to the blackboard.

(b) Now look at the school map again. Guess and mark where would these be:

·Almirah in IV and X

·Notice board in V and VI B

·Display Board in I.

(b) The required items are marked as desired.

(c) Can a child sitting in III A see the playground?

Ans. (c) A child sitting in III A cannot see the playground