1. A) Chocolate bar Manju had a chocolate. She gave one-fourth of it to Raji, one-third to Sugatha and one-sixth to Sheela. She ate the remaining part.

How many pieces of chocolate did each get? Write here.

What part of the chocolate did Manju eat? 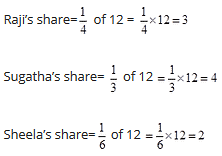 So, Manju eat one-fourth of the choclate. 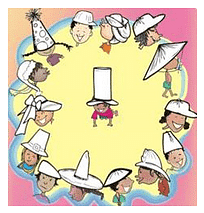 3. Equal part of a triangle

(a) The white triangle is divided into three equal parts. Fill each one-third part with a    different colour.

Can you show that these parts are equal? Think how?

Ans. (a) Since, one triangle is divided into three equal parts, therefore, each part is one-third 1/3 of the whole triangle. Let us 1/3 in each part and colour them in different colours as shown in the above figure.

In order to show that these parts are equal. Let us name them, as T1, T2 and T3. Trace any of them, say T1. Now place traced part over T2 and T3.We find that T1 covers T1, T2 and T3 are of the same shape and size. Hence, these triangles are equal.

(b) Now try to make three parts of the triangle in a different way. Colour each one-third with a different colour.

Ans. (b) The given triangle is divided into three equal parts of showing the adjoining figure. Each one-third part is coloured differently.

4. How will you check that each part is really one-sixth of that rectangle?

Ans. Trace a rectangle equal to any one of the six parts of one of the figures. Put the trace out rectangle on the remaining parts one by one. It overlaps completely. This showed that each all part is one sixth of the given rectangle. In the same, we can find out in case of the other figure.

5. The green rectangle is bigger than the blue one.

7. Look at grid A again. Is the grid coloured:

Mark (X) on the wrong answer. 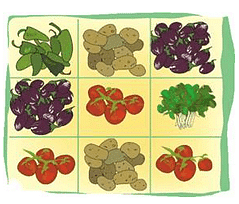 (1) Which vegetable grows in the biggest part of the field? What part?

(2) On what part of the field does he grow potatoes?

(3) What parts of the field is used to grow spinach? What part is used for brinjals?

(1) Tomatoes grow in the biggest part of his field. It grows in one-third part of the field.

Q. How many potatoes and tomatoes did Nancy get?

Nancy got 3 potatoes and 8 tomatoes.

10. Game: Who colours the Circle Fast?

This game is to be played in groups of 4. Each player has to make a circle as shown. Each one has to make 15 tokens on slips on paper.

Shuffle, the tokens and make a pile in the middle of the group. Now you are ready to start the game.

The first player takes a token from the pile, colours that part of the picture, and puts the token under the pile. The next player does the same, and so on. The winner is the one who first colours the circle completely.

Who won the game?

What are the winner’s tokens?

Write the tokens you got.

What part of the circle did you colour?

Ans. Each of the 4 players should make a circle as shown. Each one of them should make 15 tokens on slips of paper and write

to make the above and tokens. Let us play the game as directed.

I won the game.

I coloured the circle completely.

Ramesh bought a piece of halwa for his children Ammu and Anu. He divided it equally for them.

This piece is too big. We can’t eat it. They said. So, he divided the piece into half again. Now, many pieces will Ammu get? 2 pieces.

Make it even smaller. Dad asked. So, he again cut the halwa into smaller pieces. Ok, thank you, Dad.

(c)Now how many pieces will each get?

Ans. Now each of them will get 4 pieces.

(d)What part of the halwa is each piece now?

(e) If Ramesh had cut the halwa into 6 equal parts how many pieces would each have got? Look at your answers for questions 1 to 4 and write:

Ans. If Ramesh had cut the halwa into 6 equal parts, then each would get 3 pieces.

will make one rupee?

will make one rupee?

A School has decided to bring out a magazine every quarter of the year. How many magazines will they have in a year? If they want to print it at the end of each quarter of a year, which are the months for printing? Mark the number for those months.

Ans.  Every quarter of the year means every 1/4  of the year. It is exhibited on the strip as under:

They will have four magazines in a year.

In order to print the magazine at the end of each quarter of the year, they should print it in the months of March, June, September and December. These months are encircled on the strip.

Have you heard of Kumbhakarna, the brother of Ravana? He is famous for sleeping for half a year.

Most people sleep about 8 hours a day. Then what part of a day is it?

So what part of a year do they sleep? A person 60 years old must have slept ….years.

Ans. Yes, I have heard of Kumbhakarna, the brother of Ravana.

Most of the people sleep for one-third of a day.

Because one-third of 60 years

Therefore, a person of 60 years old must have slept 20 years.

(a) How much does 2kg of tomato cost?

kg of tomato. How much will it cost?

(d) How much does

(e) What is the price of

(f) He bought a gourd of weight

kg and it costs……

(g) Look at the shopping list in Keerti’s hand. How much will she have to pay to buy all the these?

(h)Make a bill of your own for vegetables you want to buy. Find the total money you will have to pay. 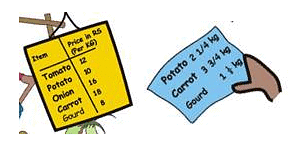 = Cost of 2kg of tomatoes +Cost of 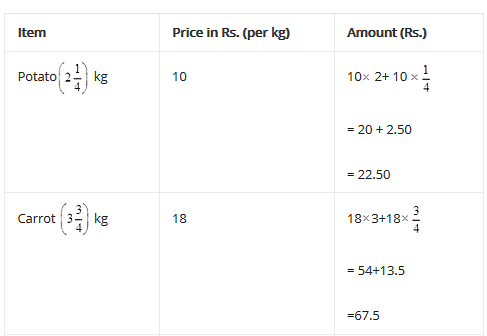 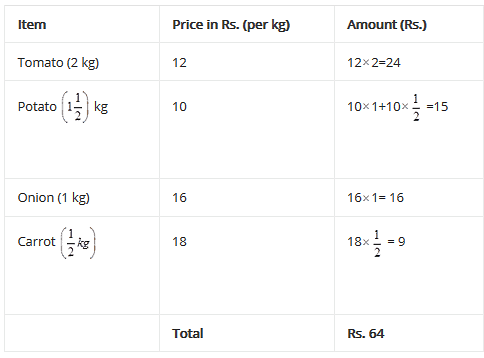 (a) Raheem has to travel

km to reach school. What distance does he travel to go to school and come back home?

Ans. The distance travelled by Raheem to go to school and come back

(b)Lata bought a pencil and a pen for seven and a half rupees. She gave Rs. 10. The shopkeeper gave back the money in half and quarter rupees. What are the coin she get?

17. At the railway station

Your attention please. Mangalore Express coming from Mangalore and going to Thiruvananthapuram is now running late by half an hour.

Oh the train is late today. The right time is a quarter to 7.

(a) What time is the train expected to come today?

Ans. The expected time of the train to come today is quarter past 7.

(b) Nazia gets off at a station after

hours from this station. What time will she get off?

Ans. Nazia will get off at quarter to 10.

(c) Shaji will take 5 hours to reach Ernakulam by this train. At what time will he reach there?

Ans. Shaji will reach Ernakulam by this train at a quarter past 12.