Q.1. How did the ant know that the other ants were not from its group?

Ans. All animals have different senses. The ant had antennae to sense smell. With the help of the smell, it came to know that the other ants were not from its group.Q.2. How did the guard ant recognise this ant?

Ans. By using it's smelling sense, the guard ant could recognise this ant.

Try This and Write

Drop some sugar, jaggery or anything sweet on the ground. Wait until the ants come there.

Q.1. How long did it take for the ants to come?

Ans. It took about 15-20 minutes for ants to come.Q.2. Did one ant come first or a group of ants came together?

Ans. One ant came first, followed by a group of ants.Q.3. What did the ants do with the food?

Ans. The ants carried the food to their hole.Q.4. Where do ants go from there?

Ans. They went to their hole from there. 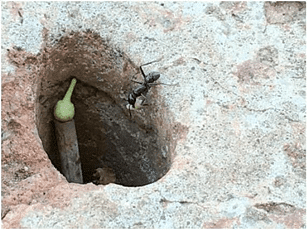 Ans. Yes, they move in a line.

Now carefully, without harming the ants, block their path for a while with a pencil.

Ans.  Even after blocking their path, ants climb up on the pencil. They still move in a line.Q.7. Now can you guess why the ants behaved like that when you blocked their path?

Ans. As the ants moves, they leave a smell on the ground. The other ants follow this smell to find the way. Thus, when their path was blocked, ants tried to maintain their path by following the smell.Q.8. Have you ever been troubled by mosquitoes? Just think, how do they know where you are?Ans. Mosquitoes can recognise the smell of our body. They can also recognise us by the heat from our body. 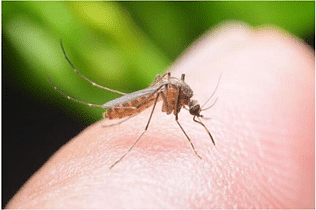 Q.9. Have you seen a dog sniffing here and there? What do you think it is trying to smell?

Ans. Yes, I have seen a dog sniffing here and there. A dog can make out the presence of another dog in the area by smelling its urine or faeces. The dog usually uses it's smelling sense to find out if a new dog has come in the area.

Q.1. In what ways do human beings make use of this special sense of smell of dogs?

Ans. This special sense of smell of dogs is used by humans in many ways.

Some examples are as follows:(a) For catching criminals.(b) For detecting stolen goods.(c) For detecting bombs.Q.2. When do you find your sense of smell helpful to you? List some examples. Like — to know by its smell that food has gone bad or that something is burning.Ans. Our sense of smell can help us to avoid accidents in many ways. These include:(i) Finding the leakage of cooking gas from cylinders;(ii) Burning of wires or clothes. 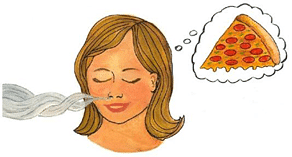 Q.3. Name the animals that you would be able to recognize only by their smell, without seeing them?

Q.5. Do you and your friends have similar answers?

Ans. Yes, our answers are similar to each other.

Do and Find Out

Q.1. Sushila covered her nose when she cleaned Deepak’s nappy, but not when she cleaned her daughter's. Why do you think she did this?Ans. When we feel something is dirty, we find its smell bad. In case of Sushila, she thought Deepak’s nappy had a dirty smell. So, she had to cover her nose. When she was cleaning her daughter’s nappy she did not think of it  having a dirty smell.Q.2. How do you feel when you walk near a heap of garbage? Think of the children who spend the whole day picking garbage things from such garbage?

Ans. I feel like closing my nose when I walk near a heap of garbage. Children who spend the whole day picking things from such garbage might get used to the smell. Hence, they do not get offended by the smell.Q.3. Is a smell ‘good’ or ‘bad’ for everyone in the same way? Or does it depend on how each one feels about it?

Ans. It depends on how the person thinks about a particular smell. But some smells can always be bad for most of the people.

Looking with One or Both Eyes

Q.1. Could you see your friend’s action with one eye open, without moving your neck?Ans.  No, I could not see my friend’s action with one eye open, without moving my neck.Q.2. Now try to look at your friend’s action with both your eyes open but without moving your neck?Ans. I could see my friend’s action now.Q.3. What is the difference on looking with one or both eyes?Ans. I can see a wider area with both eyes as compared to with one eye. I can see better with my both eyes open.Q.4. Now toss a small ball or a coin and try to catch it. Try this with both your eyes open. Then close one eye and try to catch it. When was it easier to catch?Ans. It was easier to catch the ball with both eyes open.Q.5. Imagine how it would be to have your eyes in place of your ears. What would you be able to do then, which you cannot do now?Ans. If there were eyes on the sides of my head, I could see on my left and right without moving my neck.Q.6. Now can you guess from what distance can an eagle in the sky see a roti on the ground?Ans. An eagle can see a roti on the ground from a distance of one and a half km to 2 km.

Q.1. The names of ten animals whose ears can be seen.Ans. Dog, cow, cat, buffalo, rabbit, elephant, lion, zebra, giraffe and mouse are some animals which have visible ears. 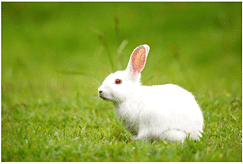 Q.1. For this activity find a quiet place in your school. Tell one of your friends to \ stand at a short distance and ask him to say something softly. The rest of you should listen carefully. Then all of you put your hands behind your ears, as shown in the picture. Let the same child say something again as softly as before. In which case was the sound sharper? 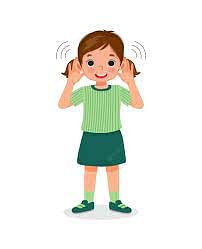 Ans. When I put my hands behind my ears, the sound was sharper.

Q.2. Put your hands over your ears and say something. Can you hear your own voice?Ans. Yes, I can hear my own voice.

Say It With Sounds

Q.1. Just like birds and dolphins you can also make your own language of sounds for giving messages. Remember you have to talk to your friends with only sounds and no words. How and when will you need to give an alarm call? For example, when the teacher is coming to the classroom!Ans. You and your friends can produce some sounds like, Yahoo, Hoho, ping-ping, tik-tik to sound an alarm. This can be used to alert others when the teacher is coming to the classroom. 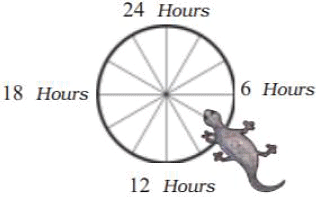 Ans. The white colour in the clock shows sleeping time for lizard in winters.Q.3. Given here is the sleeping time of some animals. Below each picture write for how many hours a day that animal sleeps.

Ans.(i) Cow: 4 hours(ii) Python: 18 hours(iii) Giraffe: 2 hours(iv) Cat: 12 hoursQ.4. When you see different animals, do you have any questions about them? Make a list of ten such questions.Ans. Yes, when I see different animals, many questions come to my mind.Some of them are as follows:1. Can they talk with each other?2. Can they understand our language?3. Can they see colours?4. How do they see at night?5. How do they sense danger?6. How do they know if something is food for them?7. How do they feel when a member of their family gets injured?8. Why only some of them can be made pet animals?9. How do they save themselves during bad weather?10. How do they make friends?Q.5. The tiger is one of the most alert animals. And yet, today tigers are in danger. What do you think are some of the dangers to tigers in the jungle?Ans. Hunters and poachers are the biggest threats for tiger. They kill tigers for skin. Lion is more powerful than tiger and can be a danger for tiger. Large scale destruction of forests is another major danger for tiger. 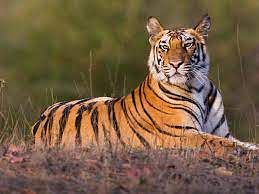 What We Have Learnt

Q.1. Have you noticed that sometimes singers put their hand on their ear when they sing? Why do you think they may be doing this?Ans. Yes, I have noticed singers putting their hand on their ear while singing. They do this to minimize noise. They also do this to hear their own voice more clearly.Q.2. Give examples of animals that may have a very strong sense of sight, hearing or smell.Ans. Some examples are as follows:(a) A police dog can smell explosives; which cannot be detected by human beings.(b) An eagle can see its small prey from high in the sky.(c) A dog can hear the faintest sound of someone’s footsteps.(d) A mosquito can find a human being by smelling his body odour.(e) Some animals behave in strange manner in case of a natural calamity which is about to happen.

The document NCERT Solutions: Super Senses - Notes | Study EVS Class 5 - Class 5 is a part of the Class 5 Course EVS Class 5.
All you need of Class 5 at this link: Class 5
Attempt Now
Join Course