The document NCERT Solution - Reproduction in Plants Class 7 Notes | EduRev is a part of the UPSC Course Science Class 7.
All you need of UPSC at this link: UPSC

Q5. Sketch the reproductive parts of a flower.Ans: 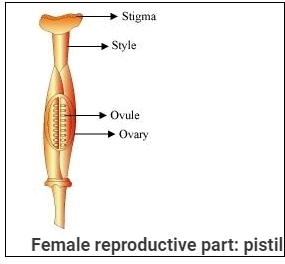 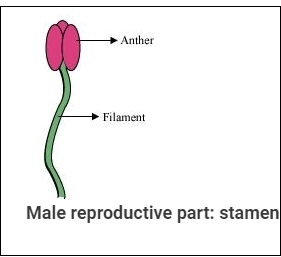 Q7. How does the process of fertilisation take place in flowers?Ans: When pollen grain lands on stigma of the flower, it germinates and gives rise to a pollen tube that passes through the style and reaches the ovary of a pistil. When the pollen tube reaches an ovule, it releases the male gametes. A male gamete fuses with a female gamete in the ovule. This process is known as fertilisation. The cell which is formed after the fusion of a male and a female gamete is known as zygote. This zygote divides several times in order to form the embryo present inside the seed. 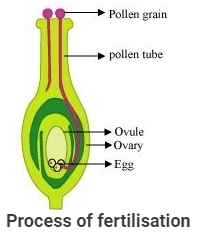 Q8. Describe the various ways by which seeds are dispersed.Ans: Seed dispersal occurs by the following agencies.

Q10. Tick (√ ) the correct answer:(a) The reproductive part of a plant is the

Ans: (iv) flower(b) The process of fusion of the male and female gametes is called

Ans: (ii) Bread mould(e) Bryophyllum can reproduce by its

The document NCERT Solution - Reproduction in Plants Class 7 Notes | EduRev is a part of the UPSC Course Science Class 7.
All you need of UPSC at this link: UPSC
All Tests, Videos & Notes of UPSC: UPSC 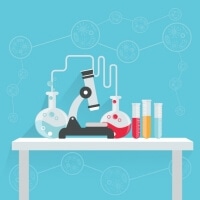