The document NCERT Solution - Chapter 12: WHAT IF IT FINISHES…?, Class 5, Environmental Studies Class 5 Notes | EduRev is a part of the Class 5 Course EVS Class 5.
All you need of Class 5 at this link: Class 5

NCERT Solution - Chapter 12: WHAT IF IT FINISHES…?, Class 5, Environmental Studies

1. What are the different kinds of vehicles that you can see?

2. What do you think they need as fuel?

Ans. Cars, buses and motorcycles need petrol, diesel or CNG while cycles do not need any such fuels.

Ans. Yes, I ride a bicycle, I go to my school, playground, market and to meet my friends using it. 4. How do they come to school?

Ans. I come to school by school bus or by my cycle.

5. How do your family members go to work from home?

Ans. My father uses car, my mother go by metro rail while my uncle go by motorcycle.

6. What problems can we have from smoke coming out of vehicles?

Ans. We can have problems like coughing, nausea, headache and diseases related to lungs can have from smoke coming out of vehicles.

7. Which states of India have oil-fields?

Ans. In India oil fields are in Assam, Gujarat and the coastal areas of Maharasthra and Andhra Pradesh.

8. Besides oil, what else is found deep inside the earth?

Ans. Besides oil, minerals like iron, copper, bauxite, gold etc. deep are found inside the earth.

9. What all can vehicle run on? 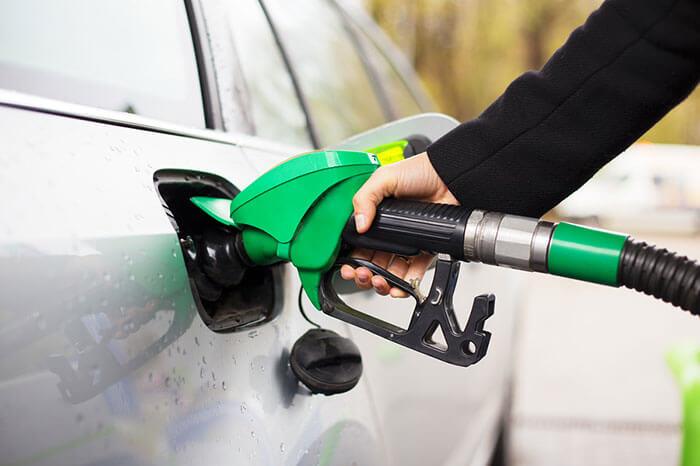 10. What kind of problems will we face, if the number of vehicles keep on increasing? For example, more traffic on the road. Talk to you elders and write about it.

Ans. If the number of vehicles keep on increasing on the road then besides heavy traffic, problems like air pollution, noise pollution, accident etc. can arise.

11. Manju said, “why doesn’t everyone use a bus?” What do you think, why don’t people travel by buses?

Ans. I think poor people prefer bicycle than to spend daily on buses while the rich ones use cars for convenience and also maintain their status.

12. Suggest some ways to deal with the problems arising out of the growing number of vehicles.

Ans. To control the growing number of vehicles people should prefer public transport system like buses, trains, metro train etc. This problem can also be effectively dealt with by making car pool i.e. sharing one’s car with their colleagues, other people etc.

13. What is the price of petrol and diesel in your area?

Ans. In our area the price of petrol is 48 rupees/litre while that of diesel is 34 rupees/litres.

14. Why are the prices of petrol and diesel going up?

Ans. The prices of petrol and diesel are going up because its production is limited while consumption is increasing day by day.

15. In one month how much petrol and diesel is used in your home? What is it used for?

Ans. In our home about 100 litres of petrol and 10 litres of diesel are used on conveyance and generator.

Ans. Oil is used as fuel for vehicles, for cooking food, lighting, dry, cleaning, to run machines and making plastic and paints.

Ans. Diesel is used to rum cars, buses, trucks, tractors, trains and generators. Besides, it is also used to run machines in factories.

18. What would happen if you don’t get petrol or diesel for a week in your village or town?

Ans. If we don’t get petrol or diesel for a week in our area, life will come to a standstill as the crisis would badly affect the transport system. Machine used in factories and agriculture works will also become non-functional. We will not be able to get electricity from generators either. In other words, life will be messed up.

19. Suggest some ways to save oil.

Ans. Following measures could be taken to save oil:

(i) In place of using personal vehicles, we should use public transport system like buses, trains or metro trains etc.

(ii) We should prefer walking on foot or using bicycle.

(iii) We should keep our vehicles switched off on red lights.

(iv) We should utilize solar energy for different purposes.

20. Have you ever collected dry wool or made cow dung cakes? How are they made?

Ans. Yes, once I have collected dry wood and also made cow dung cakes. To make cow dung cakes, balls of cow dung are made and then these are flattened to make round and flat surfaces. After that these are dried up in the sun. 21. Do you know anyone who collects drywood or leaves to be used for lighting?

Ans. Yes, I know a few people living in my village who collects dry wood or leaves for fuel.

22. Who cooks food in your family? What about other families in your area?

Ans. My mother cooks food in my family. In other families in my area the ladies or servants cook food.

23. If they cook food using wood or upla, what difficulties do they face due to smoke?

Ans. The people who cook food using wood or upla may suffer from problems like coughing, nausea, headache, and lung diseases.

24. Can Durga use anything else instead of wood. Why not?

Ans. Since Durga is poor, she is unable to use anything else instead of wood.

25. Change in fuel use over thirty years 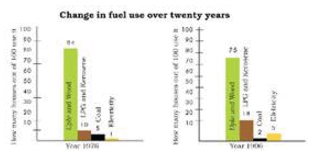 29. When they were young what was then used to cook food at home?

Ans. When they were young, coal, wood, upla were used to cook food at home. 30. In the past 10 years use of which cooking fuel has increased in your area? Use of which fuel has decreased?

Ans. In the past 10 years use of electricity and LPG has increased while use of wood, upla, coal, etc. has decreased.

31. Guess the use of which fuel increase and which would decrease in the next 10 years?

Ans. I guess in the next 10 years, use of electricity and LPG would increase while that of wood, coal and upla will decrease.

32. Imagine that a company has given you a chance to design a new vehicle like a mini bus. What kind of vehicle would you design? Write about it. Draw a picture and colour it.

Ans. I will design a bus which is environment friendly, highly fuel efficient and especially designed keeping in view the need of handicapped, children and elder people.

33. While making designs, what did you plan to take care of:

Those who cannot see? Low floor, closed door and special arrangement of seats near the doors.