1. Where did the geese live?

Ans. The geese lived on the top of a tall tree in a forest. 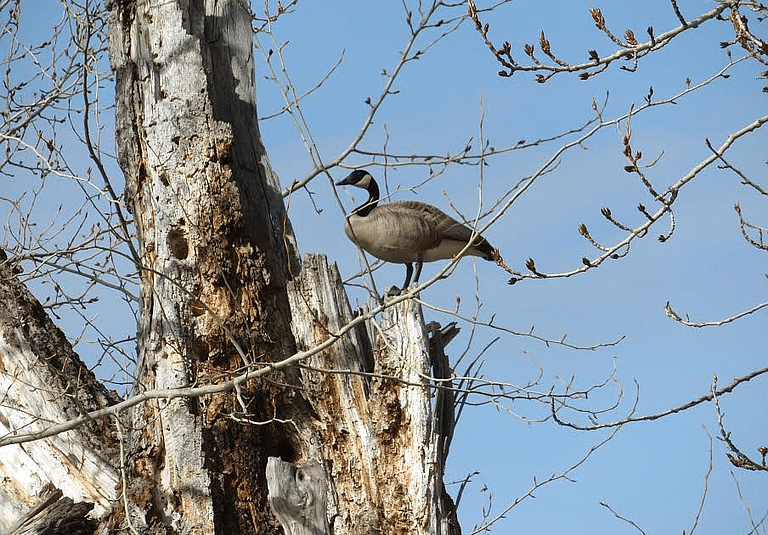 2. Why did the old bird advise the other birds to destroy the creeper?

Ans. The old bird advised the other birds to destroy the creeper because it could help a hunter climb up the tree to kill them.

Ans. The geese cried for help because they were trapped in the net by the hunter.

4. What did the hunter do when he thought that the cheese was dead?

Ans. The hunter threw them out of the net one by one on the ground.

5. Why did the geese pretend to be dead?

Ans. They pretended to be dead so that the hunter would not harm them.

6. Describe one incident when you got into trouble because you did not do your work on time.

Ans. Last year when I was in class 4, I was preparing an important lesson before the examination started. Then my cousins came to visit me from Delhi. We spent two days together. I did not get any time to prepare for the test and I got very less marks on the examination.

State whether the following statements are True or False.

1. The tree was the house of a flock of parrots.

2. The wise old bird wanted the creeper to be destroyed.

3. The hunter climbed the tree with the help of a ladder.

4. When caught in the net the foolish birds began to weep.

5. The wise old bird helps them to escape.

1. Why do you think the dove helped the ant?

Ans. Because the ant was kind, so she help the ant.

2. How do you think the ant felt on finding the leaf?

Ans. I think the ant must be happy finding the leaf near to him.

3. Have you ever been in trouble like the ant? Did anyone help you?

Ans. No, I have never been in trouble like the ant.

Use Question words such as where, what, who, how, when, and why. One has been done for you.

4. When do you go shopping?

2. Answer these questions about yourself.

Ans. My name is Avinash Sharma.

(ii) What languages do you speak?

Ans. I am ten years old.

(iv) Which is your favorite food?

Ans. My favorite food is dal-roti and vegetables. 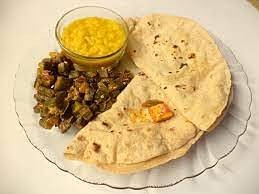 (v) Where did you go yesterday?

Ans. I went to Ambala yesterday.

(vi) Which country do you belong to?

Ans. I belong to India.

(vii) When do you go to sleep?

Ans. I drink milk to be healthy and strong.

(viii) Why do you drink milk?

Ans. I drink milk to be healthy and strong.

3. In groups of five discuss what you would do if you were caught in the following situations:

(a) Your friend falls in the playfield and is hurt.

Ans. I’ll lift him and give him first aid.

(b) You are trapped in a fire

Ans. I’ll try to come out. After that, I call to fire station.

(c) You are stuck in a traffic jam

Ans. I will wait patiently till the jam is cleared.

1. Make sentences of your own words given in the clouds. 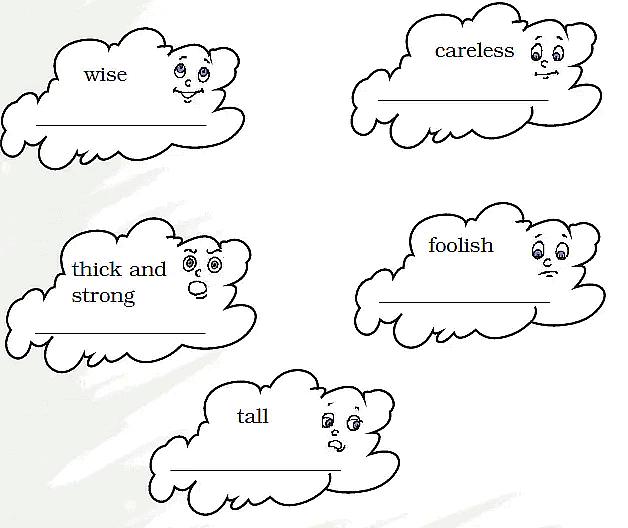 Ans. Wise: The king was very wise.Careless: We should not be careless.

Foolish: The foolish can be trapped easily.

Tall: A tall building was standing in front of the playground.

2. Frame questions for the answers.

(a) The color of the ant is black.

Ans. What is the color of the ant?

Ans. Where does it live?

(c) It has two long antennae.

Ans. How many antennae does it have?

(d) It crawls on the ground.

Ans. How does it move on the ground?

Ans. What does it eat?

3. Fill in the blanks with prepositions such as to, at, off, on, in, into, and with.

4. Complete the paragraph with suitable words from the box.

Ans. One day, as I was walking around the bank of the river, I saw my friend running into the field. He was calling my name and waving to me. I stopped and waited. After sometime he reached where I was standing.

He said, “I went all around the town looking for you. I have some exciting news to share with you. Do you remember the old house next to the neem tree? Guess who is moving into that house? Janak Das, the great magician. Now we can learn lots of magic tricks from him.”

5. Fill in the blanks given below with question words. For example, where do you live?

6. Reference to the text

Ans. When the creeper was small.

Ans. When the hunter came from hunting.

1. Proverbs are short, wise sayings. For example – Look before you leap. This means that we should think carefully before we take any action. Here are some popular English proverbs. Read them aloud together and discuss what each could mean.

Ans. 1. The person who is in contact for a long time, is more precious than ours.

2. The action of a person whether good or bad will repay him in the same manner.

3. People working in unity will solve all problems easily.

4. If we are together we win otherwise we lose.

5. A friend who helps you in trouble or in need is a true friend.