Question 11: The Balance Sheet of Rajesh, Pramod and Nishant who were sharing profits in proportion to their capitals stood as on March 31, 2015:

Pramod retired on the date of Balance Sheet and the following adjustments were made:a) Stock was valued at 10% less than the book value.b) Factory buildings were appreciated by 12%.c) Reserve for doubtful debts be created up to 5%.d) Reserve for legal charges to be made at Rs 265.e) The goodwill of the firm be fixed at Rs 10,000.f) The capital of the new firm be fixed at Rs 30,000. The continuing partners decide to keep their capitals in the new profit sharing ratio of 3:2.

Pass journal entries and prepare the balance sheet of the reconstituted firm after transferring the balance in Pramod’s Capital account to his loan account.Answer : 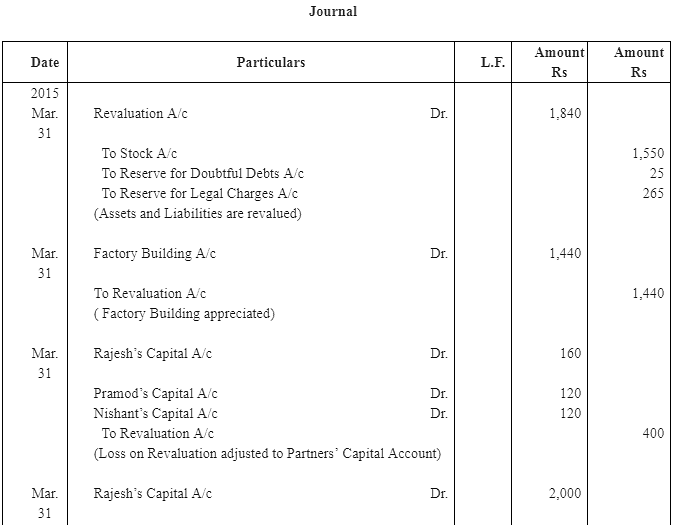 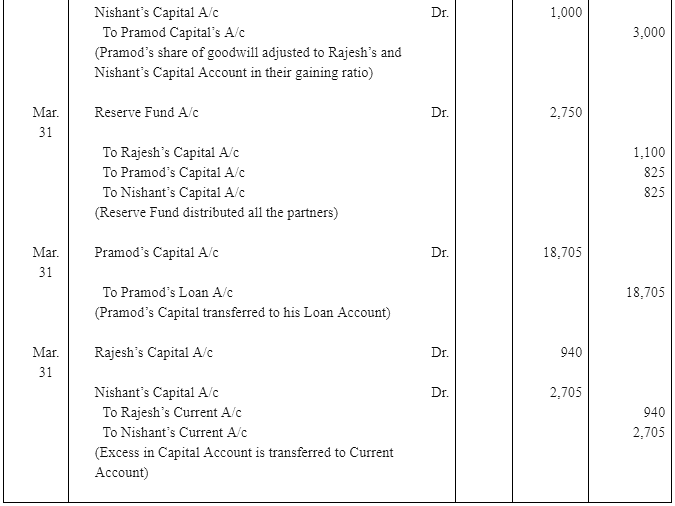 Gaining Ratio between Rajesh and Nishant = 2:1

NOTE: In the above solution, in order to adjust the capital of remaining partners in the new firm according to their new profit sharing ratio, the surplus or the deficit of Capital Account is transferred to their Current Account. But, in order to match the answer with that of given in the book, the surplus or the deficit amount of the Partners' Capital Account, will either be withdrawn or brought in by the old partners. This treatment will be shown in the Partners’ Capital itself and no need to transfer the surplus or deficit capital balance to their Current Accounts. The following Journal entry is passed to record the withdrawal of surplus capital by the partners.If existing partners withdraw their excess capital 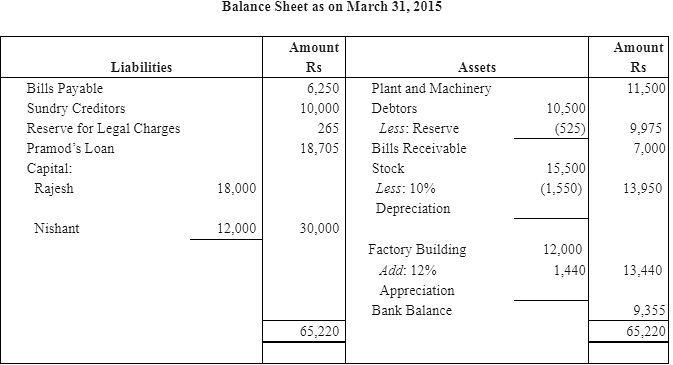 The partners have been sharing profits in the ratio of 5:3:2. Malik decides to retire from business on April 1, 2002 and his share in the business is to be calculated as per the following terms of revaluation of assets and liabilities : Stock, Rs 20,000; Office furniture, Rs 14,250; Plant and Machinery Rs 23,530; Land and Building Rs 20,000.A provision of Rs 1,700 to be created for doubtful debts. The goodwill of the firm is valued at Rs 9,000.The continuing partners agreed to pay Rs 16,500 as cash on retirement of Malik, to be contributed by continuing partners in the ratio of 3:2. The balance in the capital account of Malik will be treated as loan.Prepare Revaluation account, capital accounts, and Balance Sheet of the reconstituted firm.Answer 12:

Question 13 : Arti, Bharti and Seema are partners sharing profits in the proportion of 3:2:1 and their Balance Sheet as on March 31, 2016 stood as follows: 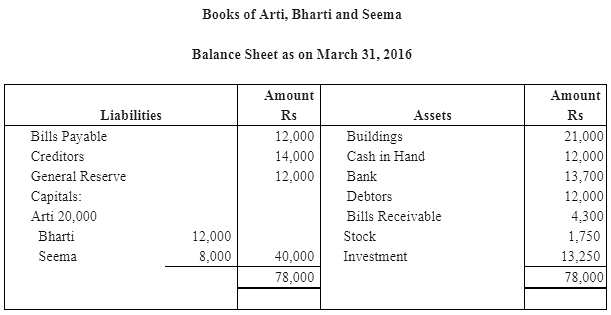 Bharti died on June 12, 2003 and according to the deed of the said partnership, her executors are entitled to be paid as under:(a) The capital to her credit at the time of her death and interest thereon @ 10% per annum.(b) Her proportionate share of reserve fund.(c) Her share of profits for the intervening period will be based on the sales during that period, which were calculated as Rs 1,00,000. The rate of profit during past three years had been 10% on sales.(d) Goodwill according to her share of profit to be calculated by taking twice the amount of the average profit of the last three years less 20%. The profits of the previous years were:2013 – Rs 8,2002014 – Rs 9,0002015 – Rs 9,800

The investments were sold for Rs 16,200 and her executors were paid out. Pass the necessary journal entries and write the account of the executors of Bharti.Answer : 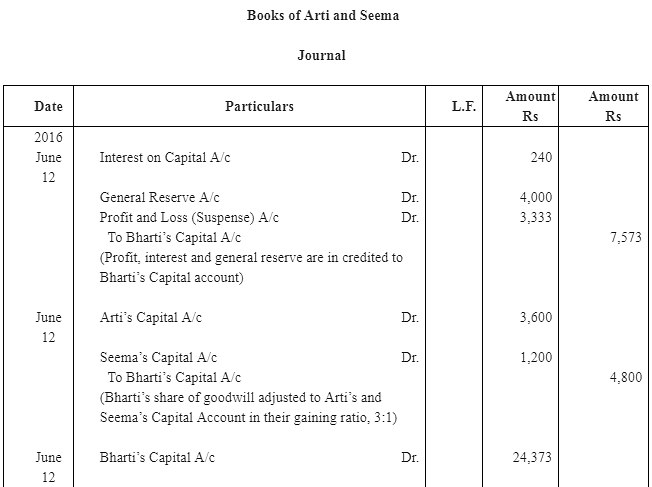 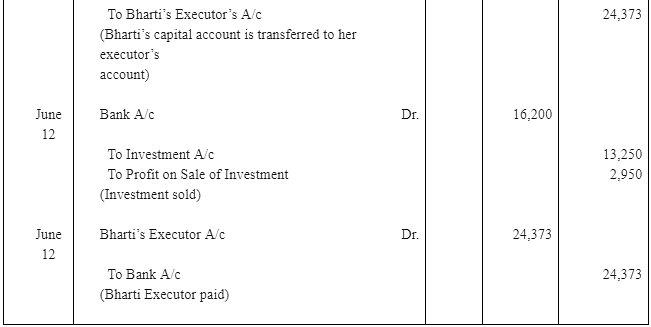 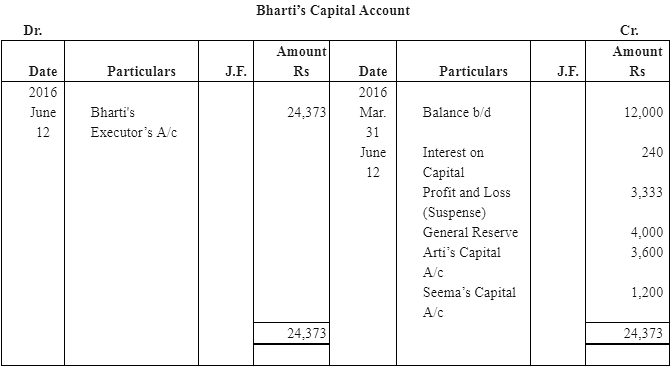 2. Bharti’s Share of GoodwillGoodwill of the firm = Average Profit × Number of Years Purchase

Question 14: Nithya, Sathya and Mithya were partners sharing profits and losses in the ratio of 5:3:2. Their Balance Sheet as on December 31, 2015 was as follows: 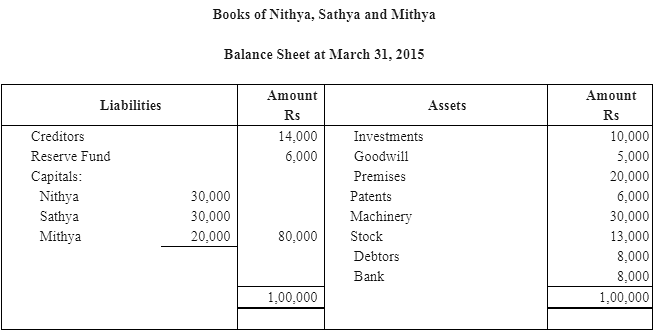 Mithya dies on August 1, 2015. The agreement between the executors of Mithya and the partners stated that:(a) Goodwill of the firm be valued at 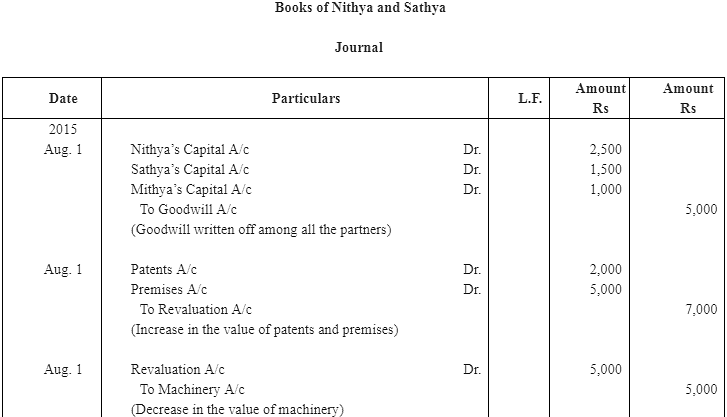 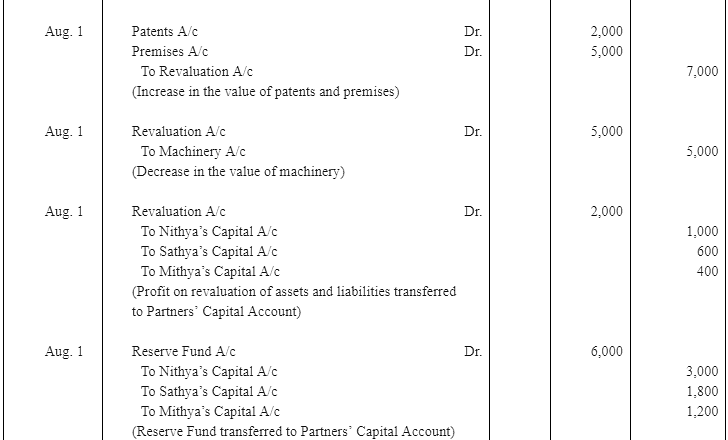 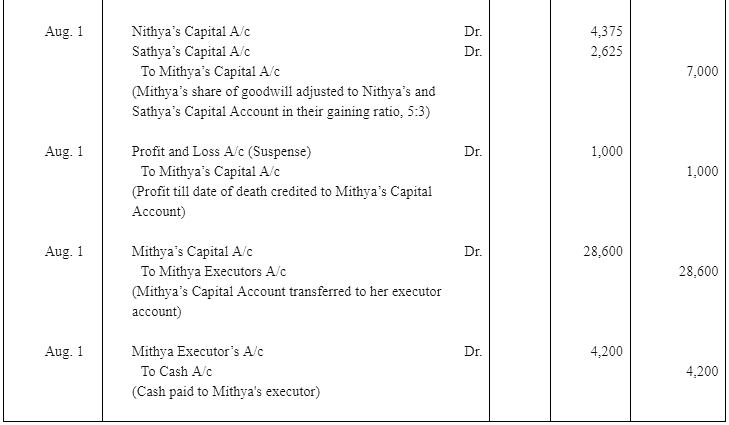 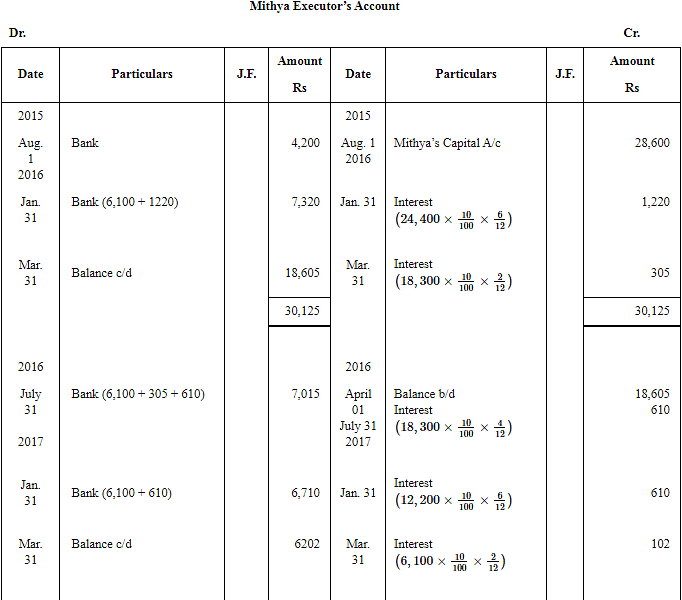 3. Mithya’s share of GoodwillGoodwill of a firm = Average Profit × Number of Year’s Purchase

Gaining Ratio between Nithya and Sathya = 5:3

The document NCERT Solution (Part - 3) - Reconstitution - Retirement/Death of a Partner - Notes - Commerce is a part of Commerce category.
All you need of Commerce at this link: Commerce
Attempt Now