1. Why did the Captain send the men to the land?

Ans. The captain sent men to the land to fetch water.

2. Why did the men rush back to the ship?

Ans. The men rushed back to the ship because a giant to chase them.

(i) The giant carried a reaping book because

(a) he was fighting with the other giants.

(b) he was going to reap the corn.

(c) he wanted to frighten Gulliver.

(a) they had never seen a human before.

(b) they thought he was a doll.

(c) they had never seen such a tiny man.

Ans. (c) they had never seen such a tiny man.

4. Name the creature to whom you would look like Gulliver. The creature is now extinct. The word begins with the letter D____.

5. From the text, write the sentences that tells you the following.

(a) The giant reapers were fascinated by Gulliver.

Ans. They all sat on the ground to take a good look at me.

(b) Gulliver was a learned man.

Ans. I tried to speak to them in seven languages.

(c) The farmer’s son thought Gulliver was a toy.

Ans. On seeing me the child grabbed me from the table and put my head into his mouth.

(d) The farmer’s wife was a kind-hearted woman.

Ans. Later she put me on her own bed and covered me with a clean white handkerchief.

6. Now complete the following. Use the words given in the box. 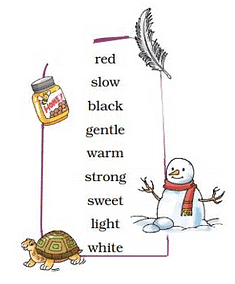 7. Use the above expressions to complete the following the sentences.

(iii) The newspaper boy was as slow ______ delivering the papers.

Ans. As a tortoise.

Ans. As a feather.

8. Create our own comparisons for the following. Work in pairs.

Ans. he found his old photograph.

Ans. I was passing along the street when corner.

Ans. The boys were quarrelling.

10. Correct the use of the describing words in the following sentences.

(a) This is the simpler problem of them all.

Ans. This is the simplest problem of them all.

(b) Which is the lightest of the two parallels?

Ans. Which is the lighter of the two parcels?

Ans. He is cleverer than me.

(e) The flood became badder as the rain increased.

Ans. The flood became worse as the rain is increased.

I am sending you a photograph of my newest pet frisky is a bulldog and a very playful puppy by next summer, he should the old enough to go with us on our long walks i m sure you are looking forward to seeing him I know you will like him

I am sending you a photograph of my newest pet. Frisky is a bull dog and a very playful puppy. By next summer he should be old enough to go with us on our long walks. I’m sure you are looking forward to see him. I know you will like him.

(a) next Wednesday my sister mita is going to join the State Bank of India.

Ans. Next Wednesday my sister, Mita is going to join the State Bank of India.

(c) when I went fishing I caught an old shoe a plastic bag and a bad cold.

Ans. When I went fishing I caught an old shoe, a plastic bag and a bad cold.

(d) she fed the baby washed the dishes put the lights off and went to sleep.

Ans. She fed the baby, washed the dishes, put off the lights off and went to sleep.