The document NCERT Solutions: Weather, Climate & Adaptations of Animals to Climate Notes | Study Science Class 7 - Class 7 is a part of the Class 7 Course Science Class 7.
All you need of Class 7 at this link: Class 7

Weather, Climate and Adaptation of Animals to Climate - NCERT Solutions

Weather influences our lives in different ways. During summer, we switch on fans to keep ourselves cool, we use light coloured clothes in order to reflect the heat. During winter, we use dark colour clothes and wrap ourselves in warm clothes to protect us from cold environment.

Ques 1. Name the elements that determine the weather of a place.

Ans: Temperature, humidity, rainfall and wind speed are the elements that determine the weather of a place.

Ques 2. When are the maximum and minimum temperature likely to occur during the day?

Ans: The temperature is minimum in the morning and maximum at the noon.

Ques 3. Fill in the blanks:

(ii) A place receives very little rainfall and the temperature is high throughout the year, the climate of that place will be ____ and _____ .

(iii) The two regions of the earth with extreme climatic conditions are _____ and ____.

Ques 4. Indicate the type of climate of the following areas:

Ques 5. Which of the two changes frequently, weather or climate?

Ques 6. Following are some of the characteristics of animals:

For each characteristic indicate whether it is adaptation for tropical rain forests or polar regions. Do you think that some of these characteristics can be adapted for both regions? 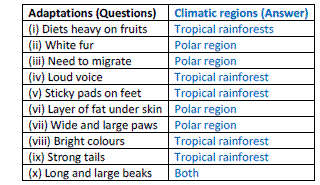 Ques 7. The tropical rain forest has a large population of animals. Explain why it is so.

Ans: Dense forest provides large amount and variety of food. This supports a large population to survive in the rain forest.

Ques 8. Explain, with examples, why we find animals of certain kind living in particular climatic conditions.

Ques 9. How do elephant living in the tropical rain forest adapt itself.

Choose the correct option which answers the following questions:

Ques 10. A carnivore with stripes on its body moves very fast while catching its prey. It is likely to be found in

(i) A white fur, fat below skin, keen sense of smell.

Ans: (i) A white fur, fat below skin, keen sense of smell.

(i) hot and humid

The document NCERT Solutions: Weather, Climate & Adaptations of Animals to Climate Notes | Study Science Class 7 - Class 7 is a part of the Class 7 Course Science Class 7.
All you need of Class 7 at this link: Class 7