The document NCERT Solution - Chapter 9 : AROUND THE WORLD, Class 5, English | EduRev Notes is a part of the Class 5 Course English Marigold Class 5.
All you need of Class 5 at this link: Class 5

1. Which tribe of Red Indians attacked the travellers?

Ans. The Sioux tribe of Red Indiana attacked the travellers.

2. Which was the highest point of their journey?

Ans. The highest point of their journey was 7524 feet above the sea level. It was on the rocky-mountains.

3. Why did the train stop the first time?

Ans. The train stopped for the first time because a herd of buffaloes was crossing the railway track.

4. How many days would it take for the train to reach New York?

5. Match the following words with their meanings. You can take the help of a dictionary.

Ans. Break the continuity of

(i) The train steamed forward at full speed.

(ii) The train headed for the step mountains.

Find five more such words from the lesson.

7. Find the opposites of the following words from the text.

8. How many doors and windows on the right side are there in the classroom?

Ans. There are two windows on the right side and a door and a window on the left side of the classroom.

9. Where are the blackboard and the cup-board?

10. How many row’s of desks are there in the middle and back rows? (a) There are ____ trees between the classroom and the playground.

(b) The ____ trees line the passage from the entrance.

(c) Many ____ trees are along the side of the playground.

12. Use the map to answer the questions. 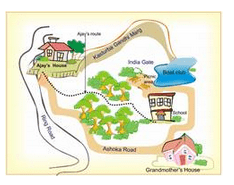 (a) What does the dotted line on the map show?

Ans. The dotted line on the map show the route from Ajay’s house to his school.

(b) What road would Ajay take to get to the boat club?

Ans. Ajay would take Kasturba Gandhi Marg to get to the boat club.

(c) What building is next to the picnic area?

Ans. India Gate is next to the picnic area.

(e) What other way could Ajay use to get from his house to his grandmother’s house.

13. Listen to the poem given below.

Day by day I float my paper boats

one by one down the running stream.

In big black letters I write my name on them

and the name of the village where I live.

I hope that someone in some strange land

will find them and know who I am.

I load my little boats with shiuli flowers from our garden,

And hope that these blooms of the dawn will be carried

safely to land in the night.

(a) Discuss with your partner would how send a similar message to someone?

Ans. We can send a similar message in a sealed bottle. The bottle will float away in the running stream.

(b) Also find out how people sent messages in olden days and how they send them now a days?

14. See the picture Travel Time below. (i) Where did you go for an excursion/holiday?

Ans. I went to Shimla.

Ans. I went there with my friends.

(iii) What did you take with you?

Ans. I took my food items, clothes, camera and binoculars.

(iv) What was the first thing you saw when you reached your destination?

(v) What did you like best about the place?

Ans. I liked the tall pine trees the best.

(vi) How long did you stay there?

Ans. I stayed there for five days.

(vii) What did you miss about home?

Ans. I missed the comfort of my home.

15. Make sentences using any two new words which you have learnt in the lesson.

(i) Shuddered: Arvind shuddered when he saw a tiger in the jungle.

(ii) Canyons: When we went to Shimla, I saw several deep canyons on the way.

16. Which do you think would be more fun — travelling by aeroplane or sailing on a ship? Write why you think so.

Ans. I think travelling by aeroplane would be fun. It would give me a view of the mountains, cities, rivers and seas from the above.

17. Fill in the blanks choosing group words from the box.

18. Some words describe actions. Many of them end in ly.

Fill in the blanks by changing the word in the brackets suitably.