Q.1. Which one of the following places receives the highest rainfall in the world?(a) Silchar (b) Mawsynram (c) Cherrapunji (d) GuwahatiAns. (b) Mawsynram

Q.2. The wind blowing in the Northern Plains in the summers is known as(a) Kaal Baisakhi (b) Loo (c) Trade Winds (d) None of the aboveAns. (b) Loo

Answer the Following Questions BrieflyQ.1. What are the controls affecting the climate of India?Ans.

The elements affecting the climate are:

Q.4. Which winds account for rainfall along the Malabar Coast?Ans. Malabar Coast gets rains from South-West Monsoon Winds.

Q.5. What are Jet streams and how do they affect the climate of India?Ans.

Q.6. Define monsoons. What do you understand by “break” in monsoon?Ans.

Q.7. Why is the monsoon considered a unifying bond?Ans.

The monsoon is considered a unifying bond because:

Q.1. Why does the rainfall decrease from the east to the west in Northern India?

(a) Seasonal reversal of wind direction takes place over the Indian subcontinent?

(b) The bulk of rainfall in India is concentrated over a few months.(c) The Tamil Nadu coast receives winter rainfall winds.(d) The delta region of the eastern coast is frequently struck by cyclones.(e)  Parts of Rajasthan, Gujarat and the leeward side of the Western Ghats are drought-prone.Ans.(a)

Q.3. Describe the regional variations in the climatic conditions of India with the help of suitable examples.

Q.4. Discuss the mechanism of monsoons.

Ans.Following are the factors responsible for the mechanism of monsoons:

Q.5. Give an account of weather conditions and characteristics of the cold season.

Ans. Following are the features of the cold season:

Q.6. Give the characteristics and effects of the monsoon rainfall in India.

Ans. Characteristics of the monsoon rainfall in India:

Effects of the monsoon rainfall in India: 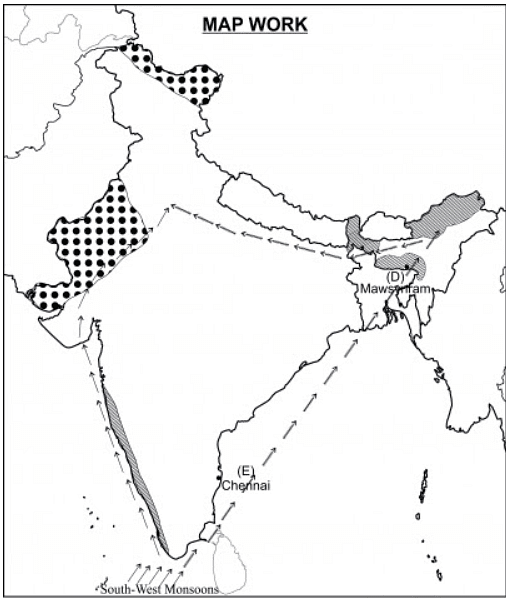 (i) The Western Coast and North Eastern India receives rainfall over 400 cm. Mawsynram and Cherrapunji in Meghalaya are known for receiving maximum rainfall in the world. The Andaman Islands and Lakshadweep Islands are also known to receive annual rainfall above 400 cm.(ii) The parts of Northern Kashmir, Western Rajasthan, Deccan plateau and Punjab are known to be the areas that receive scanty rainfall that is less than 20 cm. In Northern part of India, rainfall decreases toward the west, while in the peninsular region except for Tamil Nadu, the rainfall decreases eastwards.(iii) South west monsoon is a compound and a self-evolved weather system unique to Indian subcontinent. The south west monsoon in India moves in south-west direction. In India there are only south-west and north-east monsoons. Because of the corol is effect, the south-east monsoon becomes south west trade winds.