Q.1. Which of the following statements about the reasons for conducting elections are false?(a) Elections enable people to judge the performance of the government.(b) People select the representative of their choice in an election.(c) Elections enable people to evaluate the performance of the judiciary.(d) People can indicate which policies they prefer.Ans. Statement ‘C’ is false as:

An election is a decision-making process by which people get to choose their representative. It is a test to evaluate the functioning of government and indicates the policies, representatives would undertake. But elections cannot evaluate the performance of the judiciary. 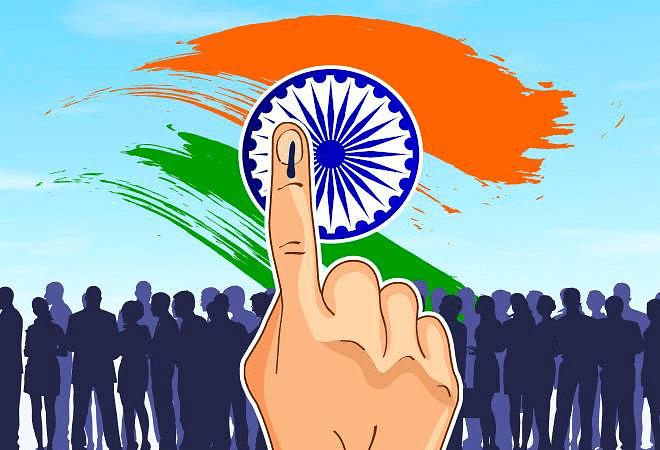 India is the largest democracy in the world and its constitution grants its people a wide number of rights. In India, elections are held under the direct control of the Election Commission of India which is an autonomous Constitutional body and the right to vote is based on the principle of Universal Adult Franchise. The success of an election is based upon the active participation of people in maximum numbers, however, voting cannot be compelled and this right is exercised by the citizens as per their discretion. Hence, saying that India has the largest number of voters in the world does not quantify the stronghold of Indian elections to be democratic.

Q.5. Surekha is an officer in charge of ensuring free and fair elections in an assembly constituency in a state. Describe what should she focus on for each of the following stages of the election.(a) Election Campaign(b) Polling Day(c) Counting DayAns.(a) Election Campaign

Ans.Based on the table, a reservation for the Hispanic community is a good idea. This is to make their representation in proportion to the percentage of their population.Q.7. Can we draw the following conclusions from the information given in this chapter? Give two facts to support your position for each of these.(a) Election Commission of India does not have enough powers to conduct free and fair elections in the country.(b) There is a high level of popular participation in the elections in our country.(c) It is very easy for the party in power to win an election.(d) Many reforms are needed to make our elections completely free and fair.Ans.(a)

Q.8. Chinappa was convicted for torturing his wife for dowry. Satbir was held guilty of practising untouchability. The court did not allow either of them to contest elections. Does this decision go against the principles of democratic elections?Ans. This decision does not go against the principles of democratic elections as both Chinappa and Satbir are criminals. Hence, they should be prevented from holding positions in the central or state assemblies.Q.9. Here are some reports of electoral malpractices from different parts of the world. Is there anything that these countries can learn from India to improve their elections? What would you suggest in each case?(a) During an election in Nigeria, the officer in charge of counting votes deliberately increased the votes of one candidate and declared him elected. The court later found out that more than five lakh votes cast for one candidate were counted in favour of another.(b) Just before elections in Fiji, a pamphlet was distributed warning voters that a vote for former Prime Minister, Mahendra Chaudhry will lead to bloodshed. This was a threat to voters of Indian origin.(c) In the US, each state has its own method of voting, its own procedure of counting and its own authority for conducting elections. Authorities in the state of Florida took many controversial decisions that favoured Mr Bush in the presidential elections in 2000. But no one could change those decisions.Ans.(a) In this case, representatives of each candidate should be present to make sure that the votes are counted in a fair way.(b) The election commission should set up an enquiry into the case and debar the candidate or party involved in distributing such pamphlets.(c) There should be a single election commission that should be free from political influence and should be responsible for conducting elections throughout the country.Q.10. Here are some reports of malpractices in the Indian elections. Identify what the problem in each case is. What should be done to correct the situation?(a) Following the announcement of elections, the minister promised to provide financial aid to reopen the closed sugar mill.(b) Opposition parties alleged that their statements and campaign was not given due attention in Doordarshan and All India Radio.(c) An inquiry by the Election Commission showed that electoral rolls of a state contain the name of 20 lakh fake voters.(d) The hoodlums of a political party were moving with guns, physically preventing supporters of other political parties to meet the voters and attacking meetings of other parties.Ans.(a)

(d) By using hoodlums, the political party is terrorising its rivals. The election commission should order the arrest of the hoodlums and bar the party from the elections.

Q.11. Ramesh was not in class when this chapter was being taught. He came the next day and repeated what he had heard from his father. Can you tell Ramesh what is wrong with these statements?(a) Women always vote the way men tell them to. So what is the point of giving them the right to vote?(b) Party politics creates tension in society. Elections should be decided by consensus, not by competition.(c) Only graduates should be allowed to stand as candidates for elections.Ans.(a)

(c) Educational qualification is not required to understand the people’s needs, and to represent their interests. Thus, it is not necessary for politicians to be graduates.