The document NCERT Solution - India: Size And Location Class 9 Notes | EduRev is a part of the UPSC Course NCERT Hindi Textbooks (Class 6 to Class 12).
All you need of UPSC at this link: UPSC

Ques.1. Choose the right answer from the four alternatives given below.(i) The Tropic of Cancer does not pass through (a) Rajasthan (b) Odisha (c) Chhattisgarh (d) TripuraAns. (b) Odisha(ii) The easternmost longitude of India is(a) 97025' E(b) 6807' E(c) 7706’ E(d) 82032' EAns. (a) 97°25' E(iii) Uttarakhand, Uttar Pradesh, Bihar, West Bengal, and Sikkim have common frontiers with(a) China(b) Bhutan(c) Nepal(d) MyanmarAns. (c) Nepal(iv) If you intend to visit Kavaratti during your summer vacations, which one of the following Union Territories of India you will be going to(a) Puducherry(b) Lakshadweep(c) Andaman and Nicobar(d) Daman and DiuAns. (b) Lakshadweep

(v) My friend hails from a country which does not share a land boundary with India. Identify the country.(a) Bhutan(b) Tajikistan(c) Bangladesh(d) NepalAns. (b) TajikistanQues.2. Answer the following questions briefly.(i) Name the group of islands lying in the Arabian Sea.(ii) Name the countries which are larger than India.(iii) Which island group of India lies to its south-east?(iv) Which island countries are our southern neighbours?Ans. (i) Lakshadweep Islands lie in the Arabian Sea.(ii) Russia, Canada, USA, China, Brazil, and Australia are the countries that are larger than India.(iii) Andaman and Nicobar Islands lie to the southeast of India. 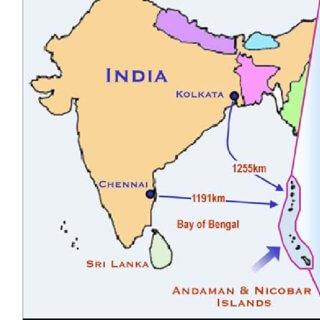 (iv) Sri Lanka and Maldives are the two island countries that are the southern neighbours of India.