Ans: 1. If nobody passes the ball in a basketball game, then you can’t shoot.2. In a relay race, if no one passes the baton, then the relay race can’t go on.

(i) To play cricket we need batsmen, bowlers, fielders, and coaches.(ii) To make a film we need producers, directors, actors, and cameramen.(iii) To run a good school we need a principal, teachers, students, and peon.(iv) To run a restaurant we need a finance manager, chefs, and waiters.

2. Complete the set of rhyming words. One has been done for you

3. Form Questions for answers given in the speech bubbles.

2) How did the kingdom get lost?

3) How did the battle get lost?

4. Now make 3 more Questions and answers from the poem, Teamwork.

Ans.2: A joy can be shared in teamwork.

Q3: How can we achieve a common goal?

Ans.3: By working together, we can achieve a common goal.

1. Look at the picture and answer the questions in one sentence, using the word clues given in the box. 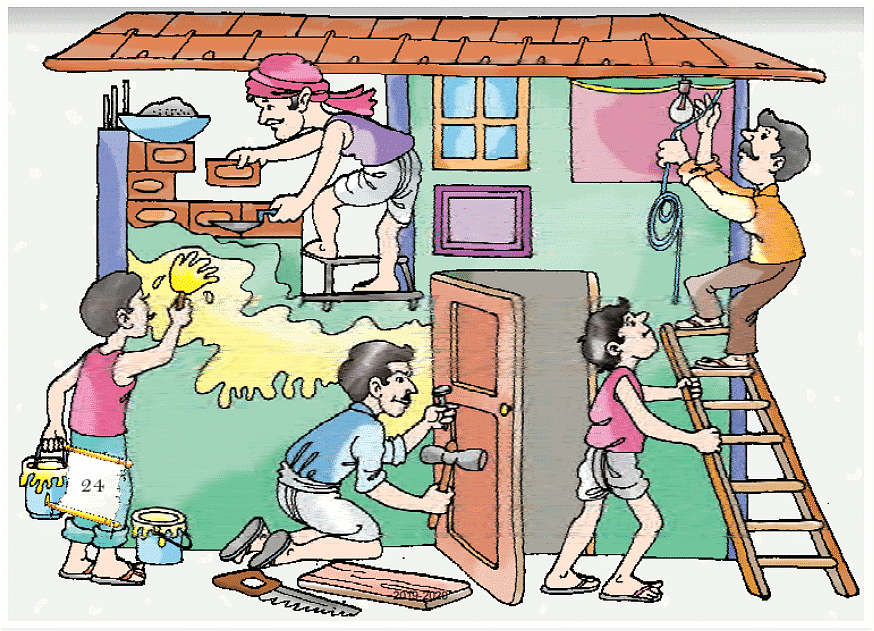 1. Who is laying the bricks?2. Who is holding the ladder?3. Who is the man on the ladder?4. Who is making the door?5. Who is painting the walls?

Ans. 1. A mason is laying bricks.2. A laborer is holding the ladder.3. An electrician is standing on the ladder.4. A carpenter is making the door.5. A painter is painting the walls.

2. Now make up a story about the picture. Give names to the people. Write the story showing the importance of teamwork Ans. The above picture shows the construction of a house. People are engaged in this work. Harish is the person who is laying the bricks. Ramesh, the carpenter is busy making the doors. Ajay is the laborer who is holding the ladder to help the electrician who is busy with electrical fittings. A house is incomplete without a plumber. Therefore, Rohan is called to lay the water pipes. A house does not look beautiful without a painter. Hence, for this work, Mohan is called who is a good painter. He paints the house beautifully for which everyone admires him. Therefore, a beautiful house is constructed by teamwork.

1.In a group of 5, Discuss what you enjoy doing alone and what you like doing in a group. 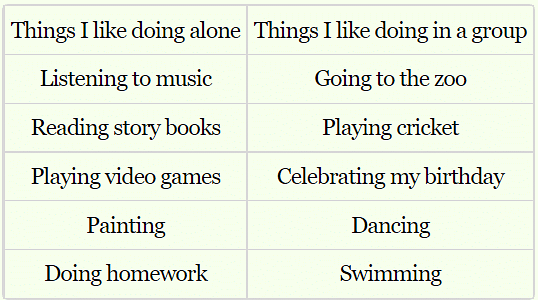 2. In your family, what activities are done individually and as a group?

Ans. My mother decides what dishes to cook.

My father decides where to invest his money.

I decide what to study.

We decide where we shall go for a holiday.

In the puzzle find the words given in the column. Notice that these words are formed by joining the words. One is done for you. Find some more such words. 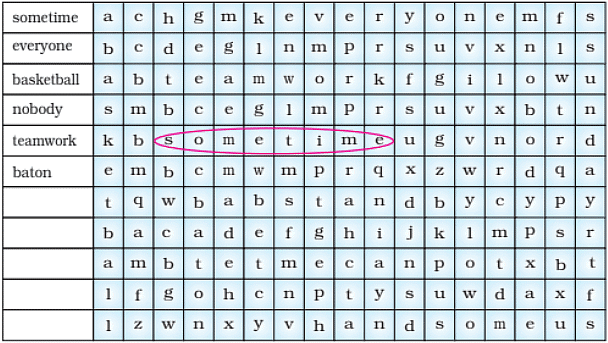 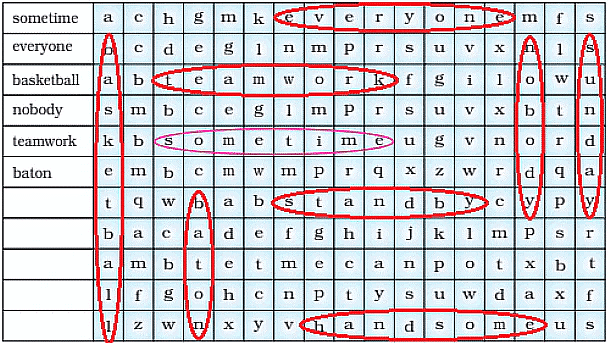 Ans. I have a kite but need a friend to fly it with.

I know a song but need someone to hear it,

I have a ball but need someone to catch it,

I know a joke but need someone to share it with.

I have a telephone but need someone to talk to.

I have a dream but need someone to joy it.

I have lost my way so need someone to.

We sometimes use short forms for some words. For example, we use I’m for I am and I’ve for I have. These shortened words are called contractions.

The mark (’) is an apostrophe that shows where the letters are left out. Now read together.

1. Write the contractions for the following phrases.

(iii) have not haven’t

2. Write the full forms for the following.

(iii) she’ll she will