1. When do children go to school in Topsy-turvy land?

Ans. In Topsy-turvy land children go to school at night.

2. In the poem, if buses travel on the sea, then where do the boats travel? How should it rightly be?

Ans. In the poem, boats travel in the streets. They should travel on the sea.

3. The land of Topsy-turvy is very different from our land. Let’s draw a competition by filling in sentences wherever needed. 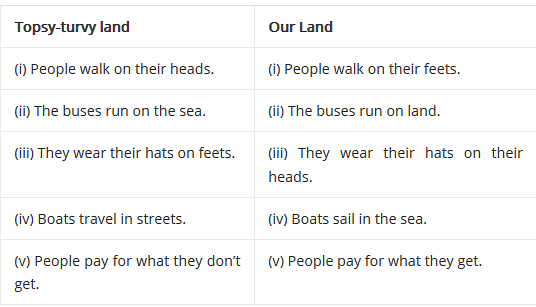 4. The words in the sentences are jumbled here. Rearrange them to make meaningful sentences. Words that began with a capital letter are the first word of the sentence.

(i) Renu naughty is a girl,

Ans. Renu is a naughty girl.

(ii) untidy room Her always is.

Ans. Her room is always untidy.

(iii) mother Her advises her clean to it.

Ans. Her mother advises her to clean it.

(iv) never listens She her mother to.

Ans. She never listens to her mother.

Ans. What kind of a child are you?

5. Can you tell of some things that go Topsy-turvy at home and there is disorder?

Ans. The things that go topsy-turvy at home are:

(i) The newspapers are not arranged date-wise. You have to ransack the whole pile to find the newspaper you need.

(ii) The keys are not in their proper place, and you look for them everywhere.

(iii) One shoe is lying under the bed and the other is in the shoe rack. You go crazy looking for the one.

(iv) You don’t arrange your books and note-books. You don’t find them when it is time to go to school.

6. Write five things that you do at home to make your home look neat and clean.

(i) Keep the bed sheets and covers properly folded and tucked away.

(iii) Shoes are kept in the shoe-racked properly.

7. Let’s imagine a topsy-turvy scene and describe it in the lines below.

Ans. In the day time in the Topsy-turvy land. People were fast asleep. As soon as the sun set, everyone got up. Children had their bath. Grandfather prepared their breakfast. Teachers came in the playground. All the Bazar opened. People bought goods but did not pay for them.

8. Two stories got mixed up. Sort them out and write them at the appropriate boxes.

(i) We thought the lion had eaten someone.

(ii) Suddenly the kite lifted him off the ground and took him over the treetops.

(iv) Finally, the kite brought him back to the park.

(v) Our class had gone to the zoo

(vi) Puran was fly the brand new kite in the park.

(vii) Some children stood and screamed, and some ran to the Director of the zoo.

(viii) Puran was frightened and excited.

(ix) The lion had not eaten anyone, because the shoe was one of the lion’s toys.

Puran was flying the brand new kite in the park.

Suddenly the kite lifted him off the ground and took him over the treetops.

Puran frightened and excited. Finally, the kite brought him back to the park.

Who Did the Lion Eat?

Our class had gone to the zoo. We saw a shoe in the lion’s cage. We thought the lion had eaten someone. Some children stood and screamed and some ran to the Director of the zoo. The lion had not eaten anyone, because the shoe was one of the lion’s toys.