Q1. Here is some information about four countries. Based on this information, how would you classify each of these countries? Write ‘democratic’, ‘undemocratic’ or ‘not sure’ against each of these.(a) Country A: People who do not accept the country’s official religion do not have a right to vote.(b) Country B: The same party has been winning elections for the last twenty years.(c) Country C: the Ruling party has lost in the last three elections.(d) Country D: There is no independent election commission.Ans:(a) Undemocratic(b) Not sure(c) Democratic(d) Undemocratic 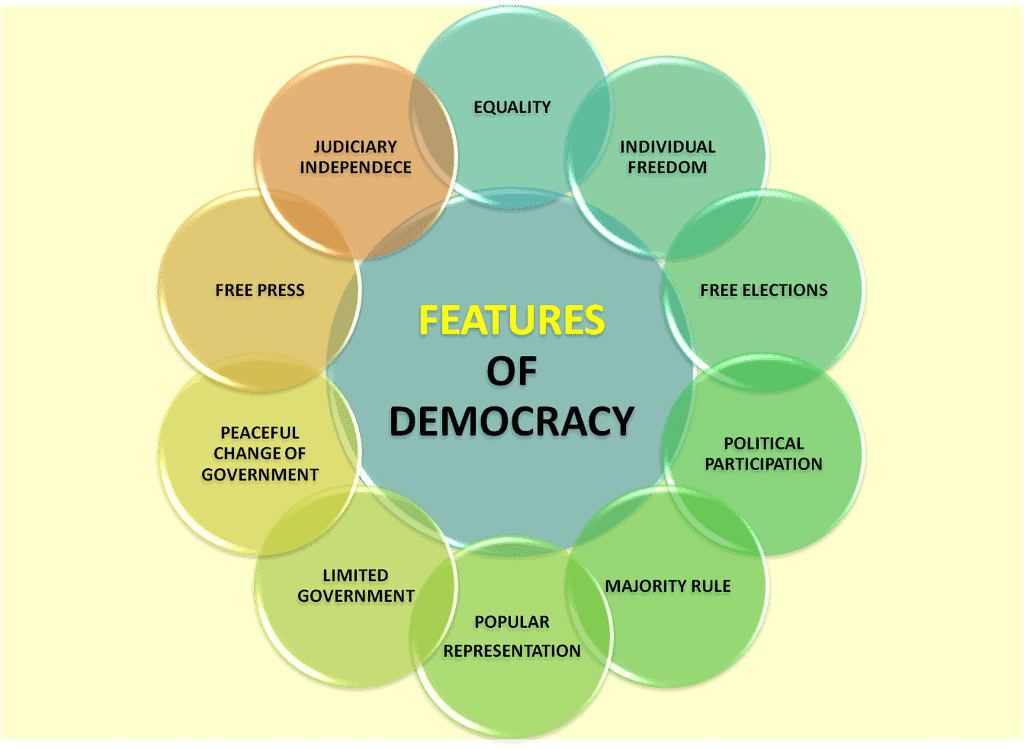 Q2. Here is some information about four countries. Based on this information, how would you classify each of these countries? Write ‘democratic’, ‘undemocratic’ or ‘not sure’ against each of these.(a) Country P: The parliament cannot pass a law about the army without the consent of the Chief of Army(b) Country Q: The parliament cannot pass a law reducing the powers of the judiciary(c) Country R: The country’s leaders cannot sign any treaty with another country without taking permission from its neighbouring country.(d) Country S: All the major economic decisions about the country are taken by officials of the central bank which the ministers cannot change.Ans:(a) Undemocratic(b) Democratic(c) Undemocratic(d) Undemocratic

Q3. Which of these is not a good argument in favour of democracy? Why?(a) People feel free and equal in a democracy(b) Democracies resolve conflict in a better way than others(c) Democratic government is more accountable to the people(d) Democracies are more prosperous than othersAns: (d)Reason

Q4. Each of these statements contains a democratic and undemocratic element. Write out the two separately for each statement.(a) A minister said that some laws have to be passed by the parliament in order to conform to the regulations decided by the World Trade Organisation.(b) The Election Commission ordered re-polling in a constituency where large scale rigging was reported.(c) Women’s representation in parliament has never reached 10 per cent. This led women’s organizations to demand one-third of seats for women.Ans:(a)

Q5. Which of these is not a valid reason for arguing that there is a lesser possibility of famine in a democratic country?(a) Opposition parties can draw attention to hunger and starvation.(b) A free press can report suffering from famine in different parts of the country.(c) The government fears its defeat in the next elections.(d) People are free to believe in and practice any religion.

Ans: (d) People are free to believe in and practice any religion.Reason:Option ‘d’ is not a valid reason for arguing that there is a lesser possibility of famine in a democratic country. This is because practising religion has nothing to do with preventing famine.

Q6. There are 40 villages in a district where the government has made no provision for drinking water. These villagers met and considered many methods of forcing the government to respond to their need. Which of these is not a democratic method?(a) Filing a case in the courts claiming that water is part of the right to life.(b) Boycotting the next elections to give a message to all parties.(c) Organising public meetings against the government’s policies.(d) Paying money to government officials to get water.Ans: (d) Paying money to government officials to get water.

Option ‘d’, which advocates paying the government officials money, is an undemocratic method.

Q7. Write a response to the following arguments against democracy.(a) Army is the most disciplined and corruption-free organisation in the country. Therefore army should rule the country.(b) Rule of the majority means the rule of ignorant people. What we need is the rule of the wise, even if they are in small numbers.(c) If we want religious leaders to guide us in spiritual matters, why not invite them to guide us in politics as well. The country should be ruled by religious leaders.Ans: (a)

Q8. Are the following statements in keeping with democracy as a value? Why?(a) Father to daughter: I don’t want to hear your opinion about your marriage. In our family children marry where the parents tell them to.(b) Teacher to student: Don’t disturb my concentration by asking me questions in the classroom.(c) Employee to the officer: Our working hours must be reduced according to the law.Ans:(a) Undemocratic: The daughter has been denied permission to express her views/opinion on her marriage.(b) Undemocratic: The student is not being allowed to ask questions in the class.(c) Democratic: As the employee is asking working hours to be reduced according to the law.Q9. Consider the following facts about a country and decide if you would call it a democracy. Give reasons to support your decision.(a) All the citizens of the country have the right to vote Elections are held regularly.(b) The country took a loan from international agencies. One of the conditions for the given loan was that the government would reduce its expenses on education and health.(c) People speak more than seven languages but education is available only in one language, the language spoken by 52 per cent of people of the country.(d) Several organisations have given a call for peaceful demonstrations and nationwide strikes in the country to oppose these policies. The government has arrested these leaders.(e) The government owns the radio and television in the country. All the newspapers have to get permission from the government to publish any news about the government’s policies and protests.Ans:

Q10. In 2004 a report published in USA pointed to the increasing inequalities in that country. Inequalities in income reflected in the participation of people in democracy. It also shaped their abilities to influence the decisions taken by the government. The report highlighted that:

Write an essay on ‘Democracy and Poverty’ using the information given in this report but using examples from India.Ans: