NCERT Solutions : Ch-3-We're Not Afraid to Die...if We Can All Be Together, Hornbill English, Class | EduRev Notes

Commerce : NCERT Solutions : Ch-3-We're Not Afraid to Die...if We Can All Be Together, Hornbill English, Class | EduRev Notes

The document NCERT Solutions : Ch-3-We're Not Afraid to Die...if We Can All Be Together, Hornbill English, Class | EduRev Notes is a part of the Commerce Course English Class 11.
All you need of Commerce at this link: Commerce

Q.1. List the steps taken by the captain(i) to protect the ship when rough weather began. (ii) to check the flooding of the water in the ship.Ans. (i) When the rough weather began, the captain slowed down the boat by dropping the storm jib. He lashed heavy mooring rope in a loop across the stern. They prepared themselves for the worst-case scenario by double lashing everything, going through the life-raft drills, attaching lifelines, and donning life jackets and oilskins. Later, the narrator managed to stretch canvas and secure waterproof hatch covers across the gaping holes.(ii) To check the flooding of water in the ship, he put waterproof hatch covers across the gaping holes which diverted the water to the side. When the hand pump got blocked, he connected a spare electric pump to an out-pipe in order to drain out the water. After 36 hours of continuous pumping, they reached the last few centimeters of water.Q.2. Describe the mental condition of the voyagers on 4 and 5 January.Ans. On January 4 and 5, the voyagers were completely tired after the rigorous practice of continuous pumping. It was on January 4 that they ate their first meal in almost two days. After a short respite, they continued to face bad weather conditions, and by the morning of January 5, the situation grew desperate. The narrator tried to comfort the children. But it is worth noting that in spite of so many difficulties, the children displayed immense fearlessness. Jonathan confessed that they are not afraid to die as long as they all are together. Though this inspired the narrator to fight the sea, by that evening, he was sure that their end was fast approaching. It was only because of the moral support of his children that he continued to make efforts.Q.3. Describe the shifts in the narration of the events as indicated in the three sections of the text. Give a subtitle to each section.Ans. The first section: The first section opens on a cheerful note. The narrator and his family are all set for their ultimate dream- to take up an around-the-world voyage as Captain James Cook did. They have perfected their seafaring skills. They begin the voyage, and despite the bad weather, they celebrate Christmas on the ‘Wavewalker.’The second section: This part of the narration covers the hazards faced by the voyagers. There is a shift in the narration from cheerful to intense. They find themselves in an extremely fatal and disastrous situation. A huge wave hits their boat, and the narrator is thrown overboard. Despite getting injured, he maintains his composure and applies every possible way to tackle the critical situation. They manage to pump out the maximum amount of water out of the boat in about 36 hours. But as they continue to face bad weather conditions, the narrator loses hope. The children remain fearless, courageous, and optimistic throughout.The third section: The children provide moral support to the narrator, and he continues with his efforts. Under the captaincy of the narrator, they manage to reach Ile Amsterdam. The narrator proves his seamanship and receives the title of “the best daddy” and “the best captain” from his children.The above three sections can be subtitled as follows:a) The first section: Round-the-world voyage beginsb) The second section: The attack of the big wavec) The third section: Ultimate victory

Talking about the Text

Q.1. What difference did you notice between the reaction of the adults and the children when faced with danger?Ans. The adults exhibit immense courage. The narrator acts as the true captain of the ship and works out every possible way to handle the sudden crisis. It’s mainly because of his undeterred efforts that they survive. Mary supports her husband in the navigation of the ship. Larry and Herb work endlessly to pump out the water. However, when things still do not seem to work out, the adults lose hope and wait for their end with a heavy heart. At this point, they are motivated by the children.The children offer moral support to the adults. They display maturity and tolerance. Jonathan expresses his fearlessness and courage when he says that they are not afraid of dying if they all can be together. Sue expresses her love and gratitude for her parents by making a greeting card. She is strong enough to not let her parents know about her serious injuries. She did not want to bother her parents in times of crisis.Q.2. How does the story suggest that optimism helps to endure “the direst stress”? Ans. Optimism is a determination to overcome difficulties. It raises one’s spirits and helps one overcome stress and difficulty with ease. The story displays courage and optimism throughout. Survival happens only because of the optimistic struggle that the family carries on with. The level of perseverance in the author rises when Jonathan says, “we’re not afraid of dying if we can all be together.Besides, the caricatures of him and Mary, drawn by Sue, helps his determination and optimism to grow many folds. The positive outlook of the children infuses positivity in the narrator. He rigorously calculates their position and finally asks Larry to steer a course of 185 degrees. Though he had lost all hope by then, he did not show it and optimistically told Larry that they would spot the island by about 5 P.M. Fortunately, their struggle and optimism pays off, and they manage to find Ile Amsterdam by evening.Q.3. What lessons do we learn from such hazardous experiences when we are face-to-face with death? Ans. Such experiences teach us the potential that courage, perseverance, and tolerance hold. It explains how one must react in the direst of situations. It teaches us that one must never lose hope and try to find reasons to stay positive in the face of adversity. In such situations, one must try his/her best to remain calm and composed and understand the power of unity and teamwork. Moreover, the importance of common sense, putting continuous efforts to overcome the catastrophe, and the significance of being extra cautious and careful are learned from such hazardous experiences.Q.4. Why do you think people undertake such adventurous expeditions in spite of the risk involved? Ans. The spirit to experience unique elements of nature, undaunted passion and willingness to accept challenges drive people to take up adventurous expeditions. The people who involve themselves in such activities are very well aware of the risk involved in them. But due to their passion and enthusiasm to do something unique and great, they willingly accept such challenges. Also, their desire to be in the lap of nature and experience its beauty pushes them to such expeditions.Q.5. We have come across words like `gale’ and `storm’ in the account. Here are two more words for `storm’: typhoon, cyclone. How many words does your language have for `storm’? Ans. In Hindi, ‘storm’ is known as ‘aandhi’, ‘toofan’ 'andhad', etc.

Q.1. Here are the terms of different kinds of vessels: yacht, boat, canoe, ship, steamer, schooner. Think of similar terms in your language. Ans. ‘Naav’, ‘Nauka’, ‘Jahaaz’, and ‘Kishti’ are some of the various words used in Hindi for the word ‘boat’.Q.2. ‘Catamaran’ is a kind of boat. Do you know which Indian language this word is derived from? Check the dictionary. Ans. The word ‘Catamaran’ is derived from the Tamil word ‘Kattumaram’.Q.3. Have you heard any boatmen’s songs? What kind of emotions do these songs usually express? Ans. Yes, Boatmen’s songs usually express love and nostalgia. It revolves around the longing to meet a loved one. It may also express their love for the sea.

Q.4. The following words used in the text as ship terminology are also commonly used in another sense. In what contexts would you use the other meaning?

b) a group of persons.

b) to progress or flourish

Hatch: a) to bring forth, produce.

Anchor: a) a person or thing that can be relied upon for support.

b) host of an event.Q.5. The following three compound words end in-ship. What does each of them mean?

Airship: It is a self-propelled lighter-than-air aircraft with the means of controlling the direction of the flight.Flagship: It is a ship carrying the flag officer or the commander of a fleet, squadron. It displays the officer’s flag.Lightship: It refers to a ship anchored in a specific location flashing a very bright light for the guidance of ships, as in avoiding dangerous areas.Q.6. The following are the meaning listed in the dictionary against the phrase `take on’. In which meaning is it used in the third paragraph of the account:take on sth: to begin to have a particular quality or appearance, to assume sth.Take sb on: to employ sb; to engage sb. to accept sb as one’s opponent in a game, contest, or conflict.Take sb/sth on: to decide to do sth to allow to enter (e.g. a bus, plane or ship); to take sth/sb on board.Ans. In the third paragraph of the account, ‘take on’ is used in the sense of ‘take sb on’ i.e. ‘to employ sb’; “to engage sb’ The words are: We took on two crewmen….to help us….Q.7. Given on the next page is a picture of a yacht. Label the parts of the yacht using the terms given in the box 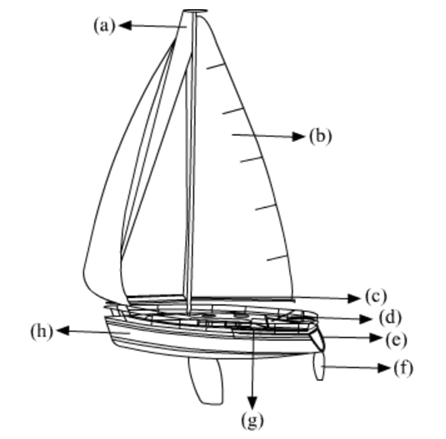 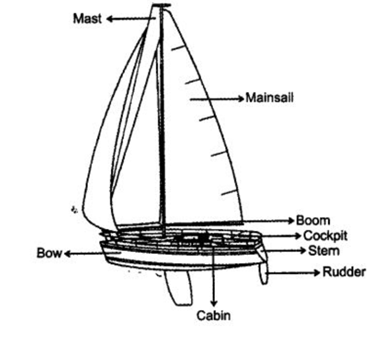 Q.8. Here is some information downloaded from the Internet on Ile Amsterdam. You can view images of the isle if you go online. 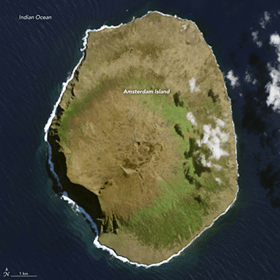 (Students may view more images of the isle if they search it online.) 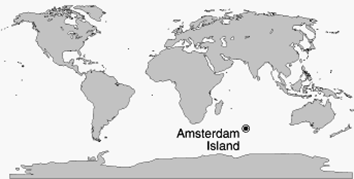