Ques 15.1: Which of the following frequencies will be suitable for beyond-the-horizon communication using sky waves?

Ans: (b)  10 MHzFor beyond-the-horizon communication, it is necessary for the signal waves to travel a large distance. 10 KHz signals cannot be radiated efficiently because of the antenna size. The high energy signal waves (1GHz − 1000 GHz) penetrate the ionosphere. 10 MHz frequencies get reflected easily from the ionosphere. Hence, signal waves of such frequencies are suitable for beyond-the-horizon communication.Ques  15.2: Frequencies in the UHF range normally propagate by means of(a) Ground waves.(b) Sky waves.(c) Surface waves.(d) Space waves.Ans: (d)  Space wavesOwing to its high frequency, an ultra high frequency (UHF) wave can neither travel along the trajectory of the ground nor can it get reflected by the ionosphere. The signals having UHF are propagated through line-of-sight communication, which is nothing but space wave propagation.Ques  15.3: Digital signals(i) Do not provide a continuous set of values,(ii) Represent values as discrete steps,(iii) Can utilize binary system, and(iv) Can utilize decimal as well as binary systems.Which of the above statements are true?(a) (i) and (ii) only(b) (ii) and (iii) only(c) (i), (ii) and (iii) but not (iv)(d) All of (i), (ii), (iii) and (iv).Ans: (c)A digital signal uses the binary (0 and 1) system for transferring message signals. Such a system cannot utilize the decimal system (which corresponds to analogue signals). Digital signals represent discontinuous values.Ques  15.4: Is it necessary for a transmitting antenna to be at the same height as that of the receiving antenna for line-of-sight communication? A TV transmitting antenna is 81 m tall. How much service area can it cover if the receiving antenna is at the ground level?Ans: Line-of-sight communication means that there is no physical obstruction between the transmitter and the receiver. In such communications it is not necessary for the transmitting and receiving antennas to be at the same height.

For range, d = (2Rh)½, the service area of the antenna is given by the relation:

The carrier wave is given by

The angular frequency of the carrier signal is calculated as:

The amplitude modulated waveform of the modulating signal is shown in the following figure. 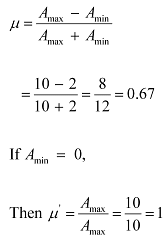 Ques  15.8: Due to economic reasons, only the upper side band of an AM wave is transmitted, but at the receiving station, there is a facility for generating the carrier. Show that if a device is available which can multiply two signals, then it is possible to recover the modulating signal at the receiver station.Ans: Let ωc and ωs be the respective frequencies of the carrier and signal waves.

Instantaneous voltage of the carrier wave, Vin = Vc cos ωct

, which is the signal frequency.

The document NCERT Solutions: Communication Systems - Notes | Study Physics Class 12 - NEET is a part of the NEET Course Physics Class 12.
All you need of NEET at this link: NEET
Attempt Now
Join Course