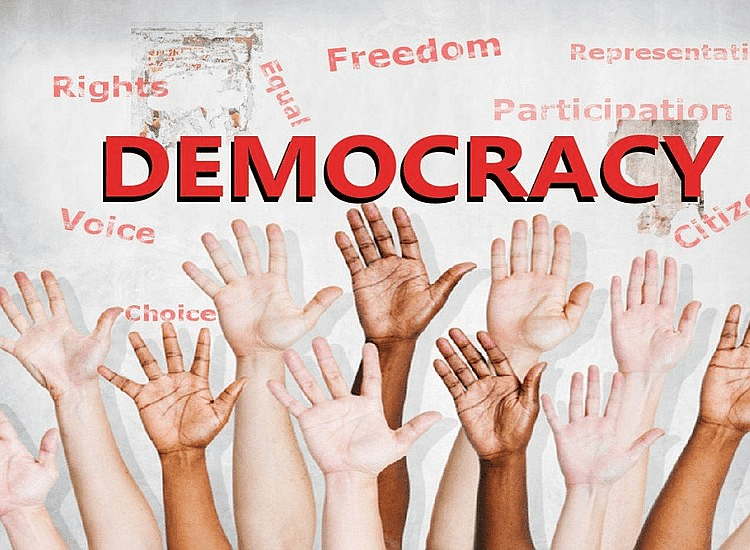 Explanation: The invasion by foreign countries is military offensive action by one country. In this large number of combatants of one country enter aggressively in the territory owned by another country, with the object of conquering or establishing control over the territory. This is a serious threat to the democratic system of a country, as by this the independence of the citizens as well as of the nation as a whole is lost.

Explanation: Democracy is a form of government in which the rulers are elected by the people.

Q.4. Based on the information given in this chapter, match the following countries and the path democracy has taken in that country.

Q.5. What are the difficulties people face in a non-democratic country? Give answers drawing from the examples given in this chapter.Ans

Q.6. Which freedoms are usually taken away when a democracy is overthrown by the military?Ans.

Q.7. Which of the following positions can contribute to democracy at the global level? Give reasons for your answer in each case.(a) My country gives more money to international institutions. Therefore, I want to be treated with more respect and exercise more power.(b) My country may be small or poor. But my voice must be heard with equal respect because these decisions will affect my country.(c) Wealthy nations will have a greater say in international affairs. They cannot let their interests suffer just because they are outnumbered by poor nations.(d) Big countries like India must have a greater say in international organisations.Ans.

Q.8. Here are three opinions heard in a television debate on the struggle for democracy in Nepal. Which of these do you agree with and why?Guest 1: India is a democracy. Therefore, the Indian government must support the people of Nepal who are struggling against the monarchy and for democracy.Guest 2: That is a dangerous argument. We would be in the same position as the US was in Iraq. Remember, no outside force can promote democracy.Guest 3: But why should we bother about the internal affairs of another country? We should be worried about our business interests there, not about democracy.Ans.

Q.9. In an imaginary country called Happyland, the people overthrew the foreign ruler and brought back the old royal family. They said: “After all their ancestors were our kings before foreigners started ruling us. It is good that we have one strong ruler, who can help us become rich and powerful”. When someone talked about democracy, the wise men said it is a foreign idea. Their struggle was to throw the foreigners and their ideas out of the country. When someone demanded freedom for the media, the elders thought that too much criticism of the ruler would not help them improve their living standards. “After all, the king is so kind and interested in the welfare of all the subjects. Why create problems for him. Don’t we all want to be happy?”After reading the above passage, Chaman, Champa and Chandru made the following observations.Chaman: Happyland is a democratic country because people were able to throw out the foreign rulers and bring back the king.Champa: Happyland is not a democratic country because people cannot criticise the ruler. The king may be nice and may provide economic prosperity, but a king cannot give a democratic rule.Chandru: What people need is happiness. So they are willing to allow their new ruler to take decisions for them. If people are happy, it must be a democracy.What is your opinion about each of these statements? What do you think about the form of government in this country?Ans.