6. Discuss whether the term “royal centre” is an appropriate description for the part of the city for which it is used.

Ans. The term “royal centre” is an appropriate description for the part of the city for which it is used because the Royal center had more than 60 temples. Most of these temples were constructed by the ruler of Vijayanagara Empire to express their supremacy. The royal centre had 30 palaces. These were made of perishable material. A brief description of the building of Royal centre are as given below:(i) One of the most beautiful buildings in the royal centre is the Lotus Mahal. It was named by British travellers in the nineteenth century. While the name is certainly romantic, historians are not quite sure what the building was used for. One suggestion, found in a map drawn by Mackenzie, is that it may have been a council chamber, a place where the king met his advisers.(ii) Most temples were located in the sacred centre. One of the most spectacular of these is the Hazara Rama Temple. This was probably meant to be used only by the king and his family.

Ans. The architecture of buildings like the Lotus Mahal and elephant stables tell us that the rulers had adopted Indian traditional symbol, signs and totems. They were Hindu by faith but they were liberal by nature.Lotus Mahal: Lotus Mahal was so named by the British travellers in the 19th century.Historians have different opinions regarding the use of this building. According to a few this building was used as a council of chamber where the king met his advisers. 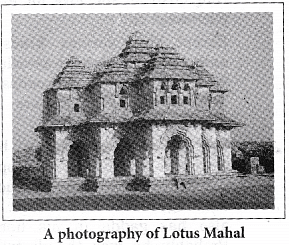 In this regard, they gave the evidence of a map drawn by Colonel Colin Mackenzie. This building is constructed in Indo-Islamic style of architecture. The pillars and arch were built in Muslim style while the wall and roof were constructed in Indian style wood and stone figures were engraved on the walls and roof to give them a decorative appearance with the passage of time to the most part of this building got destroyed, hence it is difficult to guess its grandeur.Elephant stables: The Rayas (rulers) of the Vijayanagara maintained a very large army and troops. There were a large number of elephants in the army. To keep these elephants, Elephant stable was constructed near the Lotus Mahal in which a number of rooms were lined.

Ans. The rulers of Vijayanagara were known for their many innovations in the sphere of architectural traditions. They built many new temples which presented their architectural skills. They also added many new features in the temple architecture. For example, they built gopurams and royal gateways. The towers of the central shrines signalled the presence of the temple from a great distance. But the royal gateways surpassed the kings. They showed that the kings had full command over the resources, techniques and skills. 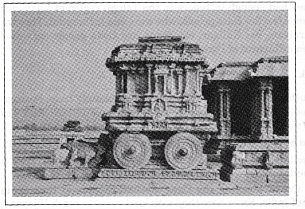 Other distinctive features of architectural style includes the constructions of mandapas or pavilions and pillared corridors that ran around the shrines. There were two main temples. The Virupaksha temple and the Vitthala Temple.The Virupaksha temple was constructed in the 9th-10th centuries. But after the establishment of Vijayanagara Empire, it was substantially enlarged. Krishnadeva Raya built one of the most powerful ruler of the empire, built a hall in front of the main shrine to mark his accession to the throne. It was decorated with delicately carved pillars. Many temple complexes had chariot streets. These streets extended from the temple gopuram in a straight line. They were paved with slabs of stone and lied with pillared pavilions. In which merchants have set up their shops. In other words, the rulars of Vijayanagara built impressive buildings.

9. What impression of the lives of the ordinary people of Vijayanagara can you cull from the various descriptions in the chapter?

Ans. Ordinary people were those people who did not take part in power structure. They spoke different languages and follow different religious traditions. They consisted of small traders and local merchants. They use to live in cities, trade centres, port , towns and villages. Local communities of merchants known as kudirai chettis or horse merchants participated in exchanges.People such as peasants, workers, slaves, etc. were also included in ordinary people.The workers were known as “Vipra viodin”. This group of ironsmiths, goldsmiths, carpenters, sculpture-makers, etc. Who often quarrelled mutually for their right. It seems that during that period, need was felt to frame laws for the society to execute social justice.Kaikkol known as the weavers were in large numbers. They lived near temples. They played significant role in running the administration of the temple. In Vijayanagara state there were Gadarias known as Kambalattar. They followed the customs of polyandry. The special characteristic was that the wife was elder to the husband. Their women had physical relations with the husband’s kinsmen like father, brothers were prevalent.There was an orthodox bigot section in Vijayanagara called as reddis who owned the land. They had enough influence in the Telugu region of Vijayanagara. In the society there were a few low class people, who were non-influential. They were Domber, Marva,Jogi, Paraiyan, Boi Kallaar, etc. Some low caste people converted into Christianity under the influences of Portuguese.

10. On an outline map of the world, mark approximately Italy, Portugal, Iran and Russia.

Ans. Followed by routes to reach Vijayanagara from Italy and Portugal:The travellers crossed the Red Sea, Arabian Sea and then, they taken land route to reach South India.Atlantic Ocean touching the Cape of Good Hope and then Indian Ocean to reach Malabar of India. From here they took land route to reach Vijayanagara.The Italian travellers crossed the Arabian Sea and then Indian Ocean and through Malabar coast they reached Vijayanagara. From Iran via Afghanistan and modern Pakistan they would have taken land route upto Karnataka, India.Russian came to India via Afghanistan. They crossed modern Punjab in Pakistan, central India crossing Vindhyachal, Satpura to Karnataka.