7. What did the rebels want? To what extent did the vision of different social group differ?

Ans. The rebels wanted to uproot the British rule. It was to be replaced by the rule of Indian, but what would be the nature of that governance is something the rebels were not sure of. They were definitely not fighting to establish a democratic government. The salient points of the vision of the rebels were as follows:1. Hindu-Muslim Unity: The rebels were not clear about the idea of Hindu-Muslim Unity. But they were definitely cherished the ideals of Hindu-Muslim unity. The religious sentiments of both the parties were respected so much so whenever a new territory fell to rebels , cow slanghter was banned.2. Preserving Indian Culture: Many believed that the company was pushing European culture and Christianity on the Indians. The rebels wanted to reverse this process. Some of the measures by the company to reform our society were also seen with the same vein.The vision of the different social groups:Zamindars: Many of them did not like the provision of auction of their estate by the company to recover losses. They considered themselves as rulers who could not be dispossessed of their estate. Hence, many of them wanted to give governance that suited their interest.Merchants: They were a mixed lot. They liked the rule of company as it maintained peace and law across vast areas of India. However, they also looked upon the company rule as partisan that promoted British trade interest at the cost of that of Indian’s, for the end of Company rule could translate into a favourable environment.Artisans: Most artisans were struggling to survive as they suffered due to policies of Company that pumped manufactured goods of England.

Ans.(i) Pictorial images were produced by both British and Indians paintings, pencil drawings, posters, etc. They form an important record of the mutiny. British pictures in particular presented a variety of images that have provoked a range of different kinds of emotions and reactions.(ii) Some of the British pictorial images commemorate the British heroes who served the English. They repressed the rebels hence represented as heroes for example, ‘Relief of Lucknow’ painted by Thomas Jones Barker, depicts the efforts of James Outrom, Henry Havelock and Colin Campbell in rescuing the besieged British garrison in Lucknow. This image was sketched in 1859.(iii) Newspapers reported incidents of violence against women and children such kinds of news when broke out, they led to demands for revenge and retribution. The British government were asked to protect the women and children. Artists have tried to express these feelings through their visual representations of trauma and suffering.(iv) Memories “In memoriam” painted by Joseph Noel Paton portrays helpless English women and children huddled in circle awaiting their fate at the hands of the rebels. Through it he ties to represent the rebels as violent.(v) Portrait of heroes of rebellion the dead and injured potrait in the picture indicate the sufferings which occurred during the siege. While the triumphant figures of heroes in the middle ground emphasised the fact that British rule had been reestablished. The rebellion has been surprised.(vi) Invincibility of British threatened by the rebellion, the British felt the need to demonstrate their invincibility. They frid to represent it through pictorial images for example, in one such image a female figure of justice with a sword in one hand a shield in the other is shown. Her posture is aggressive, her facial expression express her anger and a desire for revenge she is presented in a heroic image.(vii) In certain sketches and paintings women are depicted as heroic. They are represented as defending themselves against the rebels. Women’s struggle to save her honour and life is shown to have a deeper religious connotation. It is a battle to save the honour of Christianity and a book lying on the floor is said to symbolize the Bible.(viii) Source of deals with the report of a British officer from Oudh. The reports of the uprising of the people.

9. Examine any two sources presented in the chapter, choosing one visual and one text, and discuss how these represent the point of view of the victor and vanquished.

Ans. Ordinary people join the mutiny of 1857. Lucknow was one of the main centres. The sepoys of Awadh were joined by peasants, zamindars, traders and talukdars. 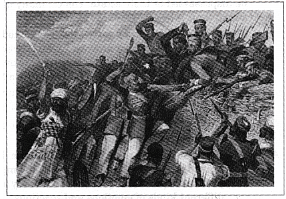 Source Sisten and the tahsildar: In the context of the communication of the message of revolt and mutiny, the experience of Francois Sisten, a native Christian police inspector in Sitapur, is telling.He had gone to Saharanpur to pay his respects to the magistrate. Sisten was dressed in Indian clothes and sitting cross-legged. A Muslim tahsildar from Bijnor entered the room; upon learning that Sisten was from Awadh, he enquired, “What news from Awadh? How does the work progress, brother?” Playing safe, Sisten replied, “If we have work in Awadh, your highness will know it.” The tahsildar said, “Depend upon it, we will succeed this time. The direction of the business is in able hands.” The tahsildar was later identified as the principal rebel leader of Bijnor. This source indicate that the effect of the rebellions had spread even among those officers who had earlier supported the British. The English men worried about their lives, property, owner of women and children. The geographical extent of the revolt was much greater. The magistrate used to get news and daily development day to day through their governmental representatives but they were suspicious as later on magistrate of Sitapur came to know that the Sisten who came to him was a great sympathiser of the rebellions.