The document NCERT Solutions (Part- 1)- Algebraic Expressions and Identities Class 8 Notes | EduRev is a part of the Class 8 Course Mathematics (Maths) Class 8.
All you need of Class 8 at this link: Class 8

(a) Five examples containing one variable are:

Consider the expression 3x + 7. This expression is containing two terms, i.e. 3x and 7.

We know that a term is a product of its factors.

The numerical factor of term is called its coefficient. The expression 9xy – 7x has the two terms

Coefficient of xy2 is 5.

An expression containting only one term is called monomial.

An expression containing one or more terms with non-zero coefficient of variables having nonnegative exponents is called a polynomial.

(a) 3 binomials with only x as a variable;

(b) 3 binomials with x and y as variables;

(c) 3 monomials with x and y as variables;

Question 1. Identify the terms, their coefficients for each of the following expressions.

Question 2. Classify the following polynomials as monomials, binomials, trinomials. Which polynomials do not fit in any of these three categories?

Following polynomials do not fit in any of these categories: 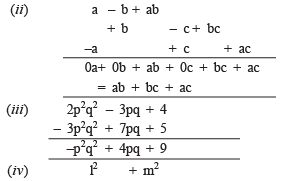 I. When we multiply monomials the product is also a monomial

II. We use the rules for exponents and powers when we multiply variables.

∴ The product of monomials is associative, i.e. the order in which we multiply the monomials does not matter.