The document NCERT Solutions(Part- 1)- Data Handling Class 8 Notes | EduRev is a part of the Class 8 Course Class 8 Mathematics by VP Classes.
All you need of Class 8 at this link: Class 8

Question: If we change the position of any of the bars of a graph, would it change the information being conveyed? Why?

Solution: If the height of a bar remains unchanged, then changing of its position does not change the information being conveyed.

To draw meaningful inferences from haphazardly-written raw-data, we need to organise the data systematically. Usually we arrange the data using tally marks.

Note: Frequency gives the number of times that a particular entry occurs.

Example: Present the following data in the form of a grouped frequency distribution table having 6 classes of equal size (one of the class being 40–48):

∴The appropriate classes can be:

Thus, the frequency distribution table for the above data can be:

Bars with a Difference [Histogram]

To represent a ‘grouped frequency distribution’ graphically, we represent the groups of observations (i.e. class intervals) on the horizontal axis and the frequencies of the class intervals along the vertical axis. Also, there is no gap between the bars. This graphical representation of data in this manner is called a histogram.

To draw a histogram, we use the following steps:

(i) We draw two perpendicular axes.

(ii) We mark the class limits on the horizontal axis.

(iii) We mark the frequencies on the vertical axis.

(iv) We construct rectangles taking the class intervals as the bases and the corresponding frequencies as the heights such that the rectangles touch each other.

Note: Choose a suitable scale on both the axes. The scale for x-axis and y-axis need not be the same in a histogram.Question: Draw an appropriate graph to represent the given information.

Note: A bar graph showing two sets of data simultaneously is called a double-bar graph. It is useful for the comparison of the data. 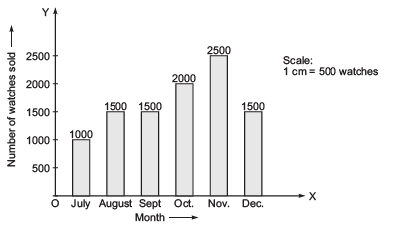 To represent the given data by a bar-graph, draw two axes perpendicular to each other. Now, represent ‘Months’ on OX and ‘Number of watch sold’ on OY. Erect rectangles of the same width. The heights of the rectangles are proportional to number of watches, using a suitable scale: 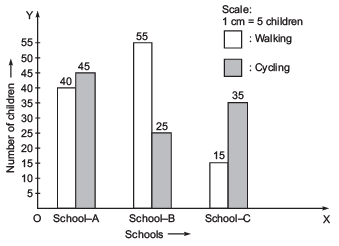 Since, a comparison of two activities (walking and cycling) is to be represented, therefore a double-graph is drawn by taking the schools along x-axis and number of children along y-axis, using a scale of 1 cm = 5 children.3. 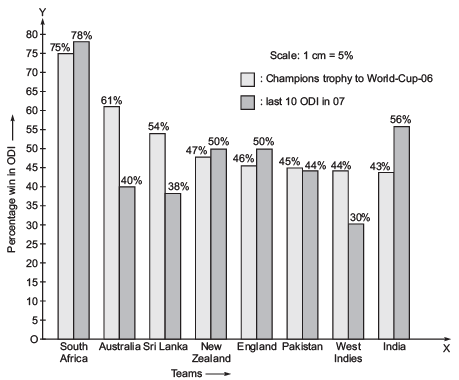 To compare the percentage win in ODI achieved by various teams, we represent the data by a double-bar graph. We represent the teams along the x-axis and their ‘percentage win’ along y-axis, using the scale 1 cm = 5%.Question . A group of students were asked to say which animal they would like most to have as a pet. The results are given below:

Make a frequency distribution table for the same.

Solution: Using tally-marks, we have:

Question. Study the following frequency distribution table and answer the questions given below.

Frequency distribution of daily income of 550 workers of a factory

(i) What is the size of the class intervals?

(ii) Which class has the highest frequency?

(iii) Which class has the lowest frequency?

(v) Which two classes have the same frequency?

The frequency distribution table for the above data can be:

Question. Observe the histogram figure and answer the questions given below: 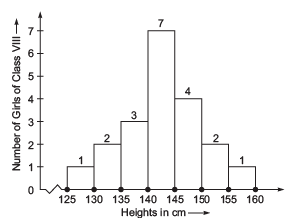 (i) What information is being given by the histogram?

(iv) If we divide the girls into the following three categories, how many would there be in each?

Solution:(i) The above histogram represents the heights (in cms) of girls of Class VIII.

(iv) Number of girls in

is used along the horizontal line to indicate that we are not showing the numbers between 0 and 125.

Question 1. For which of these would you use a histogram to show the data?

(a) The number of letters for different areas in a postman’s bag.

(b) The height of competitors in an athletics meet.

(c) The number of cassettes produced by 5 companies.

Solution: We represent those data by a histogram which can be grouped into class intervals. Obviously, for (b) and (d), the data can be represented by histograms.

Question 2. The shoppers who come to a departmental store are marked as: man (M), woman (W), boy (B) or girl (G). The following list gives the shoppers who came during the first hour in the morning:

Solution: The frequency distribution table for the above data can be:

We can represent the above data by a bar graph as given below: 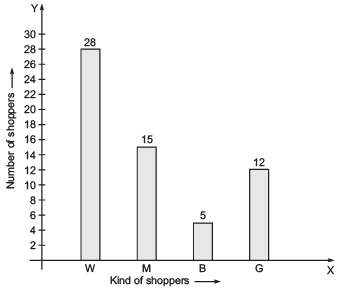 Question 3. The weekly wages (in Rs) of 30 workers in a factory are:

∴ The frequency distribution table is:

Question 4. Draw a histogram for the frequency table made for the data in Question 3, and answer the following questions.

(i) Which group has the maximum number of workers? 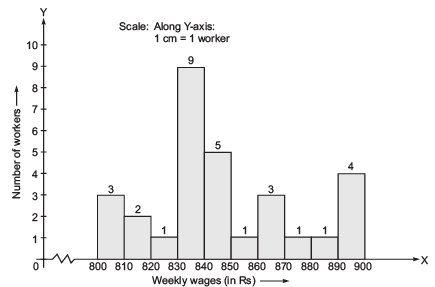 Now, we can answer the question,

Question 5. The number of hours for which students of a particular class watched television during holidays is shown through the given graph. 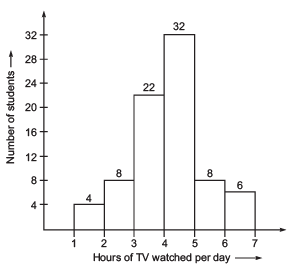 (i) For how many hours did the maximum number of students watch TV?

(ii) How many students watched TV for less than 4 hours?

(iii) How many student spen more than 5 hours in watching TV?

We can represent the numerical data in a circular form. We divide a circle in various sectors. The size of each sector is proportional to the activity or information it represents. Such representations are called circle graphs.

Note: A circle graph is also called a pie chart.

Example . Look at the following circle graph and answer the questions given below: 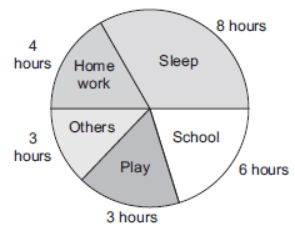 (i) Find the fraction of the circle representing each of these given information.(ii) What is the central angle corresponding to the activities “Play and Home work” ?

Solution: (i) The proportion of the sector for hours: