The document NCERT Solutions (Part - 3)- Dual Nature of Radiation and Matter Class 12 Notes | EduRev is a part of the Class 12 Course Physics Class 12.
All you need of Class 12 at this link: Class 12

Ques 11.29:The work function for the following metals is given:

Na: 2.75 eV; K: 2.30 eV; Mo: 4.17 eV; Ni: 5.15 eV. Which of these metals will not give photoelectric emission for a radiation of wavelength 3300 Å from a He-Cd laser placed 1 m away from the photocell? What happens if the laser is brought nearer and placed 50 cm away?Ans: Mo and Ni will not show photoelectric emission in both cases

It can be observed that the energy of the incident radiation is greater than the work function of Na and K only. It is less for Mo and Ni. Hence, Mo and Ni will not show photoelectric emission.

If the source of light is brought near the photocells and placed 50 cm away from them, then the intensity of radiation will increase. This does not affect the energy of the radiation. Hence, the result will be the same as before. However, the photoelectrons emitted from Na and K will increase in proportion to intensity.Ques 11.30:Light of intensity 10−5 W m−2 falls on a sodium photo-cell of surface area 2 cm2. Assuming that the top 5 layers of sodium absorb the incident energy, estimate time required for photoelectric emission in the wave-picture of radiation. The work function for the metal is given to be about 2 eV. What is the implication of your answer?Ans: Intensity of incident light, I = 10−5 W m−2Surface area of a sodium photocell, A = 2 cm2 = 2 × 10−4 m2Incident power of the light, P = I × A= 10−5 × 2 × 10−4= 2 × 10−9 WWork function of the metal,  φo = 2 eV= 2 × 1.6 × 10−19= 3.2 × 10−19 JNumber of layers of sodium that absorbs the incident energy, n = 5

Hence, the number of conduction electrons in n layers is given as:

The incident power is uniformly absorbed by all the electrons continuously. Hence, the amount of energy absorbed per second per electron is:

The time required for the photoelectric emission is nearly half a year, which is not practical. Hence, the wave picture is in disagreement with the given experiment.

Ques 11.31:Crystal diffraction experiments can be performed using X-rays, or electrons accelerated through appropriate voltage. Which probe has greater energy? (For quantitative comparison, take the wavelength of the probe equal to 1 Å, which is of the order of inter-atomic spacing in the lattice) (me= 9.11 × 10−31 kg).

Ans: An X-ray probe has a greater energy than an electron probe for the same wavelength.

The kinetic energy of the electron is given as:

v = Velocity of the electron

mev = Momentum (p) of the electron 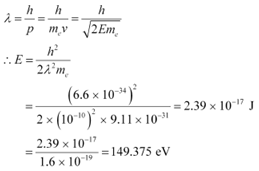 Energy of a photon,

Hence, a photon has a greater energy than an electron for the same wavelength.

Ques 11.32:(a) Obtain the de Broglie wavelength of a neutron of kinetic energy 150 eV. As you have seen in Exercise 11.31, an electron beam of this energy is suitable for crystal diffraction experiments. Would a neutron beam of the same energy be equally suitable? Explain. (mn= 1.675 × 10−27 kg)

(b) Obtain the de Broglie wavelength associated with thermal neutrons at room temperature (27 ºC). Hence explain why a fast neutron beam needs to be thermalised with the environment before it can be used for neutron diffraction experiments.

; neutron is not suitable for the diffraction experiment

The kinetic energy of the neutron is given by the relation:

It i$ clear that wavelength is inversely proportional to the square root of mass. Hence, wavelength decreases with increase in mass and vice versa.

The average kinetic energy of the neutron is given as:

The wavelength of the neutron is given as:

This wavelength is comparable to the inter-atomic spacing of a crystal. Hence, the high-energy neutron beam should first be thermalised, before using it for diffraction.Ques 11.33:An electron microscope uses electrons accelerated by a voltage of 50 kV. Determine the de Broglie wavelength associated with the electrons. If other factors (such as numerical aperture, etc.) are taken to be roughly the same, how does the resolving power of an electron microscope compare with that of an optical microscope which uses yellow light?

This wavelength is nearly 105 times less than the wavelength of yellow light.

Ques 11.34:The wavelength of a probe is roughly a measure of the size of a structure that it can probe in some detail. The quark structure of protons and neutrons appears at the minute length-scale of 10−15 m or less. This structure was first probed in early 1970’s using high energy electron beams produced by a linear accelerator at Stanford, USA. Guess what might have been the order of energy of these electron beams. (Rest mass energy of electron = 0.511 MeV.)

The momentum of a proton or a neutron is given as:

The relativistic relation for energy (E) is given as:

Thus, the electron energy emitted from the accelerator at Stanford, USA might be of the order of 1.24 BeV.

Find the typical de Broglie wavelength associated with a He atom in helium gas at room temperature (27 ºC) and 1 atm pressure; and compare it with the mean separation between two atoms under these conditions.

Atomic weight of a He atom = 4

Average energy of a gas at temperature T,is given as: 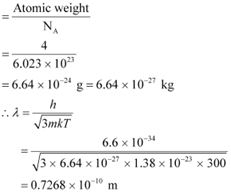 We have the ideal gas formula:

V = Volume of the gas

N = Number of moles of the gas

Mean separation between two atoms of the gas is given by the relation:

Hence, the mean separation between the atoms is much greater than the de Broglie wavelength.

Compute the typical de Broglie wavelength of an electron in a metal at 27 ºC and compare it with the mean separation between two electrons in a metal which is given to be about 2 × 10−10 m.

[Note: Exercises 11.35 and 11.36 reveal that while the wave-packets associated with gaseous molecules under ordinary conditions are non-overlapping, the electron wave-packets in a metal strongly overlap with one another. This suggests that whereas molecules in an ordinary gas can be distinguished apart, electrons in a metal cannot be distinguished apart from one another. This indistinguishibility has many fundamental implications which you will explore in more advanced Physics courses.]

De Broglie wavelength of an electron is given as:

Hence, the de Broglie wavelength is much greater than the given inter-electron separation.

(a) Quarks inside protons and neutrons are thought to carry fractional charges [( 2/3)e ; (−1/3)e]. Why do they not show up in Millikan’s oil-drop experiment?

(b) What is so special about the combination e/m? Why do we not simply talk of e and m separately?

(c) Why should gases be insulators at ordinary pressures and start conducting at very low pressures?

(d) Every metal has a definite work function. Why do all photoelectrons not come out with the same energy if incident radiation is monochromatic? Why is there an energy distribution of photoelectrons?

(e) The energy and momentum of an electron are related to the frequency and wavelength of the associated matter wave by the relations:

Ans: (a) Quarks inside protons and neutrons carry fractional charges. This is because nuclear force increases extremely if they are pulled apart. Therefore, fractional charges may exist in nature; observable charges are still the integral multiple of an electrical charge.

(b) The basic relations for electric field and magnetic field are

These relations include e (electric charge), v (velocity), m (mass), V (potential), r (radius), and B (magnetic field). These relations give the value of velocity of an electron as

It can be observed from these relations that the dynamics of an electron is determined not by e and m separately, but by the ratio e/m.

(c) At atmospheric pressure, the ions of gases have no chance of reaching their respective electrons because of collision and recombination with other gas molecules. Hence, gases are insulators at atmospheric pressure. At low pressures, ions have a chance of reaching their respective electrodes and constitute a current. Hence, they conduct electricity at these pressures.

(e) The absolute value of energy of a particle is arbitrary within the additive constant. Hence, wavelength (λ) is significant, but the frequency (ν) associated with an electron has no direct physical significance.

Group speed is given as:

This quantity has a physical meaning.