Question 2.53: The ejection of the photoelectron from the silver metal in the photoelectric effect experiment can be stopped by applying the voltage of 0.35 V when the radiation 256.7 nm is used. Calculate the work function for silver metal.

Ans:- From the principle of conservation of energy, the energy of an incident photon (E) is equal to the sum of the work function (W0) of radiation and its kinetic energy (K.E) i.e.,

Substituting the values in the given expression of E:

The potential applied to silver metal changes to kinetic energy (K.E) of the photoelectron. Hence,

Question 2.54: If the photon of the wavelength 150 pm strikes an atom and one of its inner bound electrons is ejected out with a velocity of 1.5 × 107 ms–1, calculate the energy with which it is bound to the nucleus.

Ans:- Energy of incident photon (E) is given by,

Energy of the electron ejected (K.E)

Hence, the energy with which the electron is bound to the nucleus can be obtained as: 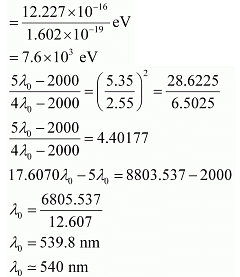 Substituting the value of ν in the given expression,

The spectrum lies in the infra-red region.

Question 2.56: Calculate the wavelength for the emission transition if it starts from the orbit having radius 1.3225 nm & ends at 211.6 pm. Name the series to which this transition belongs & the region of the spectrum.

Ans:- The radius of the nth orbit of hydrogen-like particles is given by,

Thus, the transition is from the 5th orbit to the 2nd orbit. It belongs to the Balmer series.

Wave number for the transition is given by,

Wavelength (λ) associated with the emission transition is given by,

Question 2.57: Dual behaviour of matter proposed by de Broglie led to the discovery of electron microscope often used for the highly magnified images of biological molecules & other type of material. If the velocity of the electron in this microscope is 1.6×106 ms–1, calculate de Broglie wavelength associated with this electron.

de Broglie’s wavelength associated with the electron is 455 pm.

Question 2.58: Similar to electron diffraction, neutron diffraction microscope is also used for the determination of the structure of molecules. If the wavelength used here is 800 pm, calculate the characteristic velocity associated with the neutron.

Substituting the values in the expression of velocity (v),

Velocity associated with the neutron = 494 ms–1

Question 2.59: If the velocity of the electron in Bohr’s first orbit is 2.19 × 106 ms–1, calculate the de Broglie wavelength associated with it.

Ans:- According to de Broglie’s equation,

λ = wavelength associated with the electron

Substituting the values in the expression of λ:

Wavelength associated with the electron = 332 pm

Ans:- According to De Broglie’s expression,

Substituting the values in the expression,

Δx = uncertainty in position of the electron

Δp = uncertainty in momentum of the electron

Substituting the values in the expression of Δp:

Since the magnitude of the actual momentum is smaller than the uncertainty, the value cannot be defined. 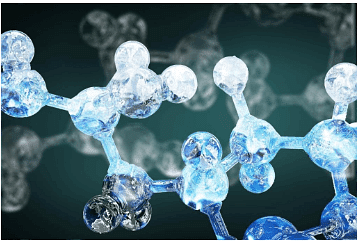 Question 2.62: The quantum numbers of six electrons are given below. Arrange them in order of increasing energies. If any of these combination(s) has/have the same energy lists:

Ans:- Nuclear charge experienced by an electron (present in a multi-electron atom) is dependant upon the distance between the nucleus and the orbital, in which the electron is present. As the distance increases, the effective nuclear charge also decreases.

Question 2.64: Among the following pairs of orbitals which orbital will experience the larger effective nuclear charge?

(i) The electron(s) present in the 2s orbital will experience greater nuclear charge (being closer to the nucleus) than the electron(s) in the 3s orbital.

(ii) 4d will experience greater nuclear charge than 4f since 4d is closer to the nucleus.

(iii) 3p will experience greater nuclear charge since it is closer to the nucleus than 3f.

Question 2.65: The unpaired electrons in Al and Si are present in 3p orbital. Which electrons will experience more effective nuclear charge from the nucleus?

Question 2.66: Indicate the number of unpaired electrons in:

The electronic configuration of P is:

The orbital picture of P can be represented as:

From the orbital picture, phosphorus has three unpaired electrons.

The electronic configuration of Si is:

The orbital picture of Si can be represented as:

From the orbital picture, silicon has two unpaired electrons.

The electronic configuration of Cr is:

The orbital picture of chromium is:

From the orbital picture, chromium has six unpaired electrons.

The electronic configuration is:

The orbital picture of chromium is:

From the orbital picture, iron has four unpaired electrons.

The electronic configuration is:

The orbital picture of krypton is:

Since all orbitals are fully occupied, there are no unpaired electrons in krypton.

(b) Number of orbitals in the nth shell = n2

If each orbital is taken fully, then it will have 1 electron with ms value of - ½.