Question 11.1: Classify the following as primary, secondary and tertiary alcohols: 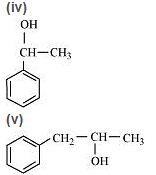 Question 11.2: Identify allylic alcohols in the above examples.

ANSWER: The alcohols given in (ii) and (vi) are allylic alcohols.

Question 11.3: Name the following compounds according to IUPAC system. 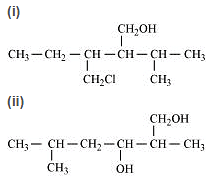 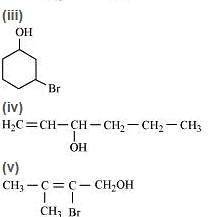 Question 11.4: Show how are the following alcohols prepared by the reaction of a suitable Grignard's reagent on methanal?

Question 11.5: Write structures of the products of the following reactions: 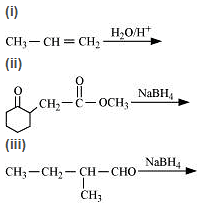 Question 11.6: Give structures of the products you would expect when each of the following alcohol reacts with (a) HCl-ZnCl2 (b) HBr and (c) SOCl2.

Primary alcohols do not react appreciably with Lucas’ reagent (HCl-ZnCl2) at room temperature.

Question 11.7: Predict the major product of acid catalysed dehydration of

(i) 1-methyl cyclohexanol and

Question 11.8: Ortho and para nitrophenols are more acidic than phenol. Draw the resonance structures of the corresponding phenoxide ions.

Resonance structure of the phenoxide ion 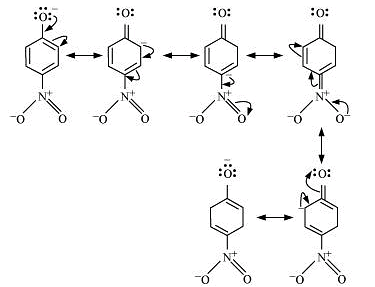 It can be observed that the presence of nitro groups increases the stability of phenoxide ion.

Question 11.9: Write the equations involved in the following reactions: 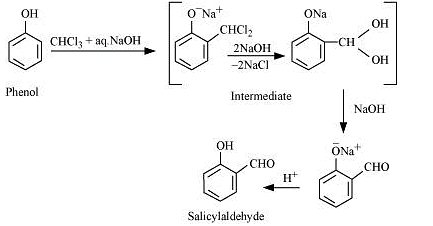 Question 11.10: Write the reactions of Williamson synthesis of 2-ethoxy-3-methyl pentane starting from ethanol and 3-methylpentan-2-ol.

Question 11.11: Which of the following is an appropriate set of reactants for the preparation of 1-methoxy-4-nitrobenzene and why?

ANSWER: Set (ii) is an appropriate set of reactants for the preparation of 1-methoxy-4-nitrobenzene.

In set (i), sodium methoxide (CH3ONa) is a strong nucleophile as well as a strong base. Hence, an elimination reaction predominates over a substitution reaction.

Question 11.12: Predict the products of the following reactions: 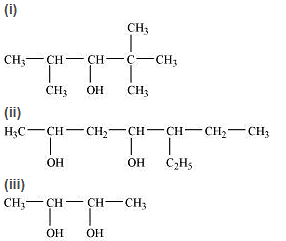 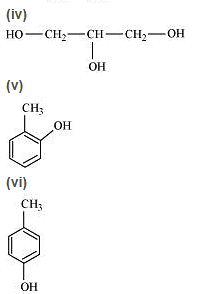 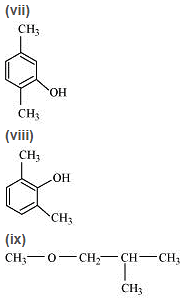 Question 11.14: Write structures of the compounds whose IUPAC names are as follows: 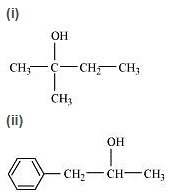 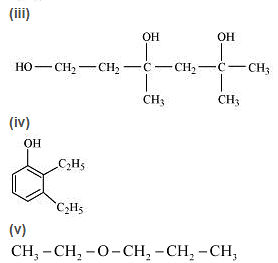 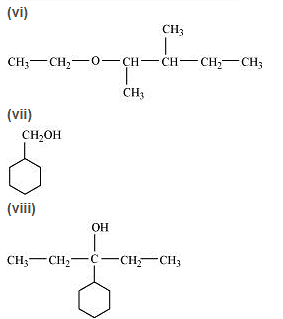 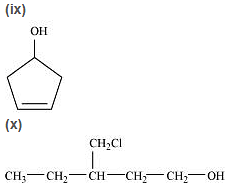 Question 11.15: (i) Draw the structures of all isomeric alcohols of molecular formula C5H12O and give their IUPAC names.

(ii) Classify the isomers of alcohols in question 11.3 (i) as primary, secondary and tertiary alcohols.

ANSWER : (i) The structures of all isomeric alcohols of molecular formula, C5H12O are shown below:

Question 11.16: Explain why propanol has higher boiling point than that of hydrocarbon, butane?

ANSWER: Propanol undergoes intermolecular H-bonding because of the presence of the −OH group. On the other hand, butane does not

Therefore, extra energy is required to break hydrogen bonds. For this reason, propanol has a higher boiling point than hydrocarbon butane.

As a result, alcohols are comparatively more soluble in water than hydrocarbons of comparable molecular masses.

Question 11.18: What is meant by the hydroboration-oxidation reaction? Illustrate it with an example.

ANSWER: The addition of borane followed by oxidation is known as the hydroboration-oxidation reaction. For example, propan-1-ol is produced by the hydroboration-oxidation reaction of propene. In this reaction, propene reacts with diborane (BH3)2 to form trialkyl borane as an additional product. This additional product is oxidized to alcohol by hydrogen peroxide in the presence of aqueous sodium hydroxide.

Question 11.19: Give the structures and IUPAC names of monohydric phenols of molecular formula, C7H8O.

Question 11.20: While separating a mixture of ortho and para nitrophenols by steam distillation, name the isomer which will be steam volatile. Give reason.

ANSWER: Intramolecular H-bonding is present in o-nitrophenol. In p-nitrophenol, the molecules are strongly associated due to the presence of intermolecular bonding. Hence, o-nitrophenol is steam volatile.

Question 11.21: Give the equations of reactions for the preparation of phenol from cumene.

ANSWER: To prepare phenol, cumene is first oxidized in the presence of air of cumene hydro-peroxide.

Then, cumene hydroxide is treated with dilute acid to prepare phenol and acetone as by-products.

Question 11.22: Write a chemical reaction for the preparation of phenol from chlorobenzene.

ANSWER: Chlorobenzene is fused with NaOH (at 623 K and 320 atm pressure) to produce sodium phenoxide, which gives phenol on acidification.

Question 11.23: Write the mechanism of hydration of ethene to yield ethanol.

ANSWER: The mechanism of hydration of ethene to form ethanol involves three steps.

Protonation of ethene to form carbocation by the electrophilic attack of H3O :

Nucleophilic attack of water on carbocation:

Question 11.24: You are given benzene, conc. H2SO4 and NaOH. Write the equations for the preparation of phenol using these reagents. 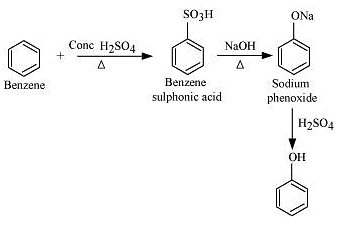 Question 11.25: Show how will you synthesize:

(i) 1-phenylethanol from a suitable alkene.

(ii) cyclohexylmethanol using an alkyl halide by an SN2 reaction.

ANSWER : (i) By acid-catalyzed hydration of ethylbenzene (styrene), 1-phenylethanol can be synthesized.

(ii) When chloromethylcyclohexane is treated with sodium hydroxide, cyclohexyl methanol is obtained.

(iii) When 1-chloropentane is treated with NaOH, pentan-1-ol is produced.

Question 11.26: Give two reactions that show the acidic nature of phenol. Compare the acidity of phenol with that of ethanol.

ANSWER: The acidic nature of phenol can be represented by the following two reactions:

(i) Phenol reacts with sodium to give sodium phenoxide, liberating H2.

(ii) Phenol reacts with sodium hydroxide to give sodium phenoxide and water as by-products.

The acidity of phenol is more than that of ethanol. This is because after losing a proton, the phenoxide ion undergoes resonance and gets stabilized whereas the ethoxide ion does not.

The nitro-group is an electron-withdrawing group. The presence of this group in the ortho position decreases the electron density in the O−H bond. As a result, it is easier to lose a proton. Also, the o-nitrophenoxide ion formed after the loss of protons is stabilized by resonance. Hence, ortho nitrophenol is a stronger acid.

On the other hand, the methoxy group is an electron-releasing group. Thus, it increases the electron density in the O−H bond and hence, the proton cannot be given out easily.

For this reason, ortho-nitrophenol is more acidic than ortho-methoxy phenol.

Question 11.28: Explain how does the −OH group attached to a carbon of benzene ring activate it towards electrophilic substitution?

The −OH group is an electron-donating group. Thus, it increases the electron density in the benzene ring as shown in the given resonance structure of phenol.

As a result, the benzene ring is activated towards electrophilic substitution.

Question 11.29: Give equations of the following reactions:

(i) Oxidation of propan-1-ol with alkaline KMnO4 solution.

(ii) Bromine in CS2 with phenol.

(iv) Treating phenol with chloroform in presence of aqueous NaOH. 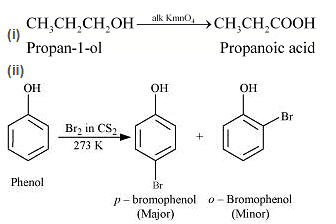 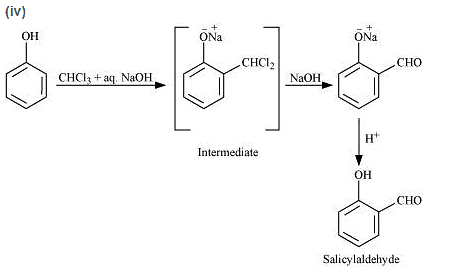 Question 11.30: Explain the following with an example.

When phenol is treated with chloroform (CHCl3) in the presence of sodium hydroxide, a −CHO group is introduced at the ortho position of the benzene ring.

This reaction is known as the Reimer-Tiemann reaction.

The intermediate is hydrolyzed in the presence of alkalis to produce salicylaldehyde.

Williamson ether synthesis is a laboratory method to prepare symmetrical and unsymmetrical ethers by allowing alkyl halides to react with sodium alkoxides.

This reaction involves an SN2 attack of the alkoxide ion on the alkyl halide. Better results are obtained in the case of primary alkyl halides.

If the alkyl halide is secondary or tertiary, then elimination competes over substitution.

An unsymmetrical ether is an ether where two groups on the two sides of an oxygen atom differ (i.e., have an unequal number of carbon atoms). For example ethyl methyl ether (CH3−O−CH2CH3).

Question 11.31: Write the mechanism of acid-catalysed dehydration of ethanol to yield ethene.

ANSWER: The mechanism of acid dehydration of ethanol to yield ethene involves the following three steps:

Elimination of a proton to form ethene:

The acid consumed in step 1 is released in Step 3. After the formation of ethene, it is removed to shift the equilibrium in a forward direction.

Question 11.32: How are the following conversions carried out?

ANSWER : (i) If propene is allowed to react with water in the presence of an acid as a catalyst, then propan-2-ol is obtained.

(ii) If benzyl chloride is treated with NaOH (followed by acidification) then benzyl alcohol is produced.

(iii) When ethyl magnesium chloride is treated with methanal, an adduct is produced which gives propan-1-ol on hydrolysis.

(iv) When methyl magnesium bromide is treated with propane, an adduct is a product that gives 2-methylpropane-2-ol on hydrolysis.

Question 11.33: Name the reagents used in the following reactions:

(i) Oxidation of primary alcohol to carboxylic acid.

(iii) Bromination of phenol to 2,4,6-tribromophenol.

(v) Dehydration of propan-2-ol to propene.

Question 11.34: Give a reason for the higher boiling point of ethanol in comparison to methoxymethane.

ANSWER: Ethanol undergoes intermolecular H-bonding due to the presence of the −OH group, resulting in the association of molecules. Extra energy is required to break these hydrogen bonds. On the other hand, methoxymethane does not undergo H-bonding. Hence, the boiling point of ethanol is higher than that of methoxymethane.

Question 11.35: Give IUPAC names of the following ethers: 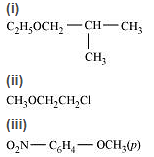 Question 11.36: Write the names of reagents and equations for the preparation of the following ethers by Williamson’s synthesis:

Question 11.37: Illustrate with examples the limitations of Williamson synthesis for the preparation of certain types of ethers.

ANSWER: The reaction of Williamson synthesis involves the SN2 attack of an alkoxide ion on a primary alkyl halide.

Question 11.38: How is 1-propoxypropane synthesised from propan-1-ol? Write mechanism of this reaction.

ANSWER: 1-propoxypropane can be synthesized from propan-1-ol by dehydration.

Propan-1-ol undergoes dehydration in the presence of protic acids (such as H2SO4, H3PO4) to give 1-propoxypropane.

The mechanism of this reaction involves the following three steps:

Question 11.39: Preparation of ethers by acid dehydration of secondary or tertiary alcohols is not a suitable method. Give reason.

ANSWER: The formation of ethers by dehydration of alcohol is a bimolecular reaction (SN2) involving the attack of an alcohol molecule on a protonated alcohol molecule. In the method, the alkyl group should be unhindered. In the case of secondary or tertiary alcohols, the alkyl group is hindered. As a result, elimination dominates substitution. Hence, in place of ethers, alkenes are formed.

Question 11.40: Write the equation of the reaction of hydrogen iodide with:

Question 11.41: Explain the fact that in aryl alkyl ethers

(ii) It directs the incoming substituents to ortho and para positions in the benzene ring.

In aryl alkyl ethers, due to the R effect of the alkoxy group, the electron density in the benzene ring increases as shown in the following resonance structure.

Thus, benzene is activated towards electrophilic substitution by the alkoxy group.

Question 11.42: Write the mechanism of the reaction of HI with methoxymethane.

ANSWER: The mechanism of the reaction of HI with methoxymethane involves the following steps:

Step2: Nucleophilic attack of I−:

When HI is in excess and the reaction is carried out at a high temperature, the methanol formed in the second step reacts with another HI molecule and gets converted to methyl iodide

(i) Friedel-Crafts reaction−alkylation of anisole. 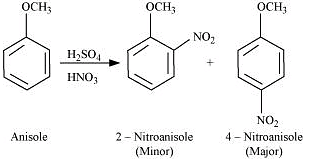 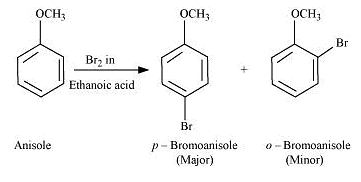 Question 11.44: Show how would you synthesise the following alcohols from appropriate alkenes?

ANSWER: The given alcohols can be synthesized by applying Markovnikov’s rule of acid-catalyzed hydration of appropriate alkenes.

Thus, the first reaction is preferred over the second one to get pentan-2-ol.

Question 11.45:When 3-methylbutan-2-ol is treated with HBr, the following reaction takes place:

Give a mechanism for this reaction.

ANSWER: The mechanism of the given reaction involves the following steps:

Step 2: Formation of 2° carbocation by the elimination of a water molecule

Step 3: Re-arrangement by the hydride-ion shift