(a) near the Equator

(b) near the Tropic of Cancer

(c) near the Tropic of Capricorn

(d) near the Arctic Circle

(iii) The direction of wind around a low pressure in northern hemisphere is:

(b) perpendicular to isobars

(iv) Which one of the following is the source region for the formation of air masses?

(a) the Equatorial forest

2. Answer the following questions in about 30 words.

(i) What is the unit used in measuring pressure? Why is the pressure measured at station level reduced to the sea level in preparation of weather maps?

Millibar or Pascal is the unit used in measuring pressure. It is reduced to the sea level in the preparation of weather maps as the gravity of air at the surface is denser and hence has higher pressure.

(ii) While the pressure gradient force is from north to south, i.e. from the subtropical high pressure to the equator in the northern hemisphere, why are the winds north easterlies in the tropics?

(iii) What are the geostrophic winds?AnswerWhen isobars are straight and when there is no friction, the pressure gradient force is balanced by the Coriolis force and the resultant wind blows parallel to the isobar. This wind is known as the geostrophic wind.

(iv) Explain the land and sea breezes.AnswerDuring the day the land heats up faster and becomes warmer than the sea. Therefore, over the land the air rises giving rise to a low pressure area, whereas the sea is relatively cool and the pressure over sea is relatively high. Thus, pressure gradient from sea to land is created and the wind blows from the sea to the land as the sea breeze.

In the night the reversal of condition takes place. The land loses heat faster and is cooler than the sea. The pressure gradient is from the land to the sea. This is known as land breeze.

3. Answer the following questions in about 150 words.

(i) Discuss the factors affecting the speed and direction of wind.

The speed and direction o the wind is controlled by the combined effects of three forces:

• Frictional Force: It affects the speed of the wind. It is greatest at the surface and its influence generally extends upto an elevation of 1 - 3 km. Over the sea surface the friction is minimal.

• Coriolis Force: The rotation of the earth about its axis affects the direction of the wind. This force is called the Coriolis force after the French physicist who described it in 1844. It deflects the wind to the right direction in the northern hemisphere and to the left in the southern hemisphere.

(ii) Draw a simplified diagram to show the general circulation of the atmosphere over the globe. What are the possible reasons for the formation of subtropical high pressure over 30°N and S latitudes? 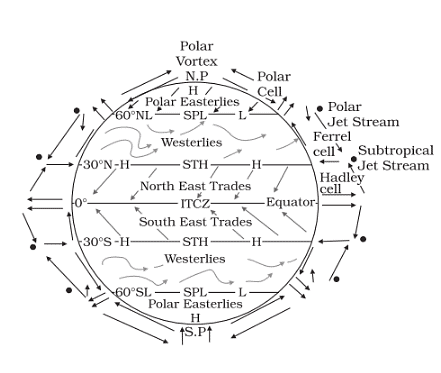 The general circulation of the atmosphere also sets in motion the ocean water circulation which influences the earth’s climate. The air at the Inter Tropical Convergence Zone (ITCZ) rises because of convection caused by high insolation and a low pressure is created. The winds from the tropics converge at this low pressure zone. The converged air rises along with the convective cell. It reachesthe top of the troposphere up to an altitude of 14 km. and moves towards the poles. This causes accumulation of air at about 30°N and S. Part of the accumulated air sinks to the ground and forms a subtropical high. Another reason for sinking is the cooling of air when it reaches 30°N and S latitudes.

Tropical cyclones originate and intensify over warm tropical oceans. The conditions favourable for the formation and intensification of tropical storms are:

(i) Large sea surface with temperature higher than 27° C.

(ii) Presence of the Coriolis force.

The torrential rains and high velocity winds, occur in the region of the ‘eye-wall’. The eye is a region of calm with subsiding air. Around the eye is the eye wall, where there is a strong spiralling ascent of air to greater height reaching the tropopause. The wind reaches maximum velocity in this region, reaching as high as 250 km per hour.