The document NCERT Solutions - Cell - Structure and Functions, Science, Class 8 Class 8 Notes | EduRev is a part of the Class 8 Course Class 8 Science by VP Classes.
All you need of Class 8 at this link: Class 8

Q. 1. Indicate whether the following statements are True (T) or False (F).
(a) Unicellular organisms have one-celled body.
(b) Muscle cells are branched.
(c) The basic living unit of an organism is an organ.
(d) Amoeba has irregular shape.
Ans. (a) True (b) True
(c) False (d) True.

Q. 2. Make a sketch of the human nerve cell. What function do nerve cells perform?
Ans. 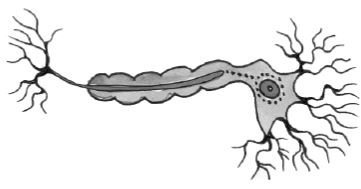 Function: (i) Nerve cells help in the transfer of messages from various body parts to brain and from brain to various parts of the body.

(ii) They help also in the coordination of the functions of the organs of the body.

Q. 3. Write short notes on the following: (a) Cytoplasm (b) Nucleus of a cell.
Ans. (a) Cytoplasm: It is a jellylike substance which is present between nucleus and cell membrane. There are various other organelles present in the cytoplasm. It is made up of carbohydrates, proteins and water.
(b) Nucleus of a Cell: Nucleus is spherical, dense structure situated commonly in the centre of the cell. Nuclear membrane separates the nucleus from cytoplasm. It contains genetic materials like RNA and DNA. Nuclear membrane allows the transfer of materials in the nucleus and cytoplasm. It also contains the threadlike structures called chromosomes which are genetic material. Nucleus controls the various functions of the cell.

Q. 4. Which part of the cell contains organelles?
Ans. Cytoplasm.

Q. 7. Where are chromosomes found in a cell? State their function.
Ans. Chromosomes are situated in the nucleus of a cell. They carry characteristics of parent cells to the daughter cells.