The document NCERT Solutions - International Business Commerce Notes | EduRev is a part of the Commerce Course Business Studies (BST) Class 11.
All you need of Commerce at this link: Commerce

ExercisesMultiple Choice Questions1. In which of the following modes of entry, does the domestic manufacturer give the right to use intellectual property such as patent and trademark to a manufacturer in a foreign country for a fee(a) Licensing(b) Contracted(c) Joint venture(d) None of these► (a) LicensingSolution: Under the licensing model, a domestic manufacturer (licensor) grants licence to a foreign manufacturer (licensee) to use its intellectual property such as patent and trademark.Hence, the correct answer is option (a)

5. Which one of the following is not amongst India's major export item?(a) Textiles and garments(b) Gems and jewellery(c) Oil and petroleum products(d) Basmati rice► (d) Basmati rice Solution: India is mainly involved in exporting textiles and garments, gems and jewellery, and oil and petroleum products. However, basmati rice is not a major item of India's exports. Hence, the correct answer is option (d).

10. Which one of the following is not a part of export documents?(a) Commercial invoice(b) Certificate of origin(c) Bill of entry(d) Mate's receipt► (c) Bill of entrySolution: Export documents include a commercial invoice, certificate of origin and mate's receipt. However, a bill of entry is not among them. This is because it is a part of an import transaction as the importer is required to fill this form at the time of receiving the goods. Hence, the correct answer is option (c). 3. What is the major reason underlying trade between nations?Answer: The following are the important reasons that encourage nations to engage in trade.(a) Difference in resource endowment: Every country is endowed with different kinds and combinations of resources. Thus, in order to obtain the resources which are not domestically available but are available in other countries, nations trade with one another.(b) Aim of attaining specialisation: Because of the availability of distinct resources, culture, labour force and technical know-how, every country has a specialisation in particular types of products. Thus, countries trade with an aim of attaining specialisation in the goods in which they have a superior technical know-how or the goods that can be produced only with the domestically available specific resources which are not available in other countries.(c) Difference in labour productivity and production cost: Production costs and labour productivity differ from one country to another. Thus, countries export the goods which they can produce efficiently at a low production cost. On the other hand, they import the goods which they are not able to produce efficiently at a lower cost.

4. Why is it said that licensing is an easier way to expand globally?Answer: The following are the important reasons put forward in favour of licensing as an easier way for a company to expand globally.(a) Less expensive: The licensor need not make huge investments abroad, and thus it is a relatively less expensive mode of entering into international markets.(b) Lesser risk of government intervention: The business in the overseas market is managed by the licensee, who is a local person. Thus, licensing involves lesser risk of government intervention in the operations.(c) Better knowledge and contacts: As the licensee is a local person, he or she has a better knowledge of the market conditions in his or her country than the licensor. This in turn helps the licensor to conduct the market operations smoothly and expand globally. 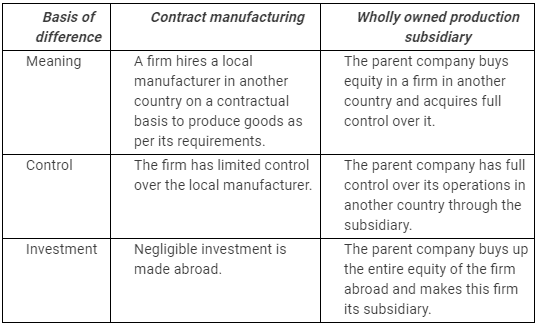 6. Discuss the formalities involved in getting an export licence.Answer: Before exporting goods, it is mandatory for exporters and export firms to fulfill the legal formalities, including securing an export licence. The following are the formalities to obtain an export licence.(a) Bank account number: An exporter must open an account in a bank authorised by the Reserve Bank of India and get an account number.(b) IEC code: An export firm must obtain an IEC (Importer Exporter Code) from the Directorate General for Foreign Trade (DGFT) or the Regional Import Export Licensing Authority by submitting documents such as the exporter’s profile, prescribed certificates, two attested photographs and details of non-resident interest.(c) Registration-cum-membership certificate: An export firm should get itself registered with the appropriate export promotion council, such as the Engineering Export Promotion Council (EEPC) and the Apparel Export Promotion Council (AEPC), and obtain a registration-cum-membership certificate (RCMC).(d) Registration with ECGC: An export firm must also get itself registered with the ECGC (Export Credit and Guarantee Corporation) in order to protect itself from any uncertainties in payments brought upon by political or commercial risks.

7. Why is it necessary to get registered with an export promotion council?Answer: If a firm wants to export goods, then it must first obtain an export licence. In order to obtain an export licence, the firm is required to register itself with the appropriate export promotion council, such as the Engineering Export Promotion Council (EEPC) and the Apparel Export Promotion Council (AEPC). Such councils are set up by the government for promoting the export of various goods falling under their purview. Once the registration is complete, the firm obtains the registration-cum-membership certificate (RCMC). This in turn enables it to take advantage of the benefits made available to export firms by the government. Thus, it is necessary for export firms to register themselves with an export promotion council.

8. Why is it necessary for an export firm to go in for pre-shipment inspection?Answer: Pre-shipment inspection refers to the inspection of goods before their final shipment in order to ensure that only quality goods are exported. The government has initiated measures such as compulsory inspection of certain goods by promulgating the Export Quality and Inspection Act, 1963, and designating various agencies to undertake inspection. Exporters are required to contact the Export Inspection Agency (EIA) or another designated agency and obtain an inspection certificate after getting the goods checked. However, in the case of goods exported by star trading houses, export houses, 100 per cent export-oriented units and industrial units set up in export processing zones (EPZs) or special economic zones (SEZs), no such inspection is required.

9. What is bill of lading? How does it differ from bill of entry? Answer: A bill of lading is an essential document required at the time of an export transaction. It is issued by the shipping company as a token of acceptance that the goods have been put on board in its vessel. A bill of lading is an undertaking from the shipping company to transfer the goods to the port of destination. Bills of lading are freely transferable.In contrast, a bill of entry is required at the time of an import transaction. It is a form supplied by the customs office and filled by the importer once the goods are received. A bill of entry is submitted at the customs office with information such as the name and address of the importer, name of the ship in which the goods were transported, number of packages, marks on the package, description of imported goods, quantity and value of the imported goods, name and address of the exporter, port of destination and customs duty payable.

10. Explain the meaning of mate's receipt.Answer: A mate’s receipt is issued by the captain or commanding officer of a ship to an exporter. This receipt acts as evidence that the exporter’s cargo has been loaded on the ship. It contains information such as the name of the vessel, berth, date of shipment, condition of the cargo when it was loaded, description of the packages of the cargo, number of packages and marks on the packages. Once the port dues are received, the port superintendent gives the mate’s receipt to the C&F agent concerned. It is only after the mate’s receipt has been obtained that the shipping company will issue the bill of lading.

Long Answer Questions1. Identify various organisations that have been set up in the country by the government for promoting country's foreign trade.Answer: In order to promote foreign trade, the government has set up the following institutions:(a) Indian Institute of Foreign Trade (IIFT): Established in 1963 under the Societies Registration Act, the IIFT is an autonomous body responsible for the management of the country’s foreign trade. It is also a deemed university that provides training in international trade, conducts research in areas of international business and disseminates data related to international trade.(b) Export Inspection Council (EIC): The EIC was established by the Government of India under Section 3 of the Export Quality Control and Inspection Act, 1963, with the objective of promoting exports through quality control and pre-shipment inspections. According to this act, all goods that are meant for exports (except some commodities) must pass through the EIC for quality inspection.(c) Indian Institute of Packaging (IIP): The IIP is a training and research institute established in 1966 by the joint efforts of the Ministry of Commerce of the Government of India, Indian packaging industry and allied industries. The institute caters to the packaging needs of domestic manufacturers and exporters.(d) Indian Trade Promotion Organisation (ITPO): The ITPO was formed on January 1, 1992, under the Companies Act, 1956. Its main objective is to maintain close interactions among traders, industry and the government. In order to fulfil this objective, the ITPO organises trade fairs and exhibitions within and outside the country, thereby helping export firms to interact with international trade bodies.(e) Department of Commerce: The Department of Commerce is the apex body in the Ministry of Commerce of the Government of India and is responsible for formulating policies related to foreign trade as well as evolving import and export policies for the country. It is responsible for all matters related to the country’s external trade.(f) Export Promotion Councils (EPCs): Registered under the Companies Act or the Societies Registration Act, EPCs are non-profit organisations that are responsible for promoting the exports of particular products. However, the product promoted by a particular EPC must fall under its jurisdiction.

3. Write a detailed note on features, structure, objectives and functioning of WTO.Answer: Features of the WTO (World Trade Organisation)(a) It governs trade in goods, services and intellectual property rights among the member countries.(b) It is a body created by an international treaty with the approval of the governments and legislatures of the member states.(c) The decisions of the WTO are made by the governments of the member nations on the basis of consensus.Structure of the WTOOn January 1, 1995, the General Agreement on Tariffs and Trade (GATT) was transformed into the WTO to facilitate international trade among the member countries. The WTO was made much more powerful than GATT, by removing tariff and non-tariff barriers between the member nations. It is a permanent body created by an international treaty and represents the implementation of the original proposal of the ITO.Objectives of the WTO(a) Reducing tariff and other non-trade barriers imposed by different nations(b) Ensuring sustainable development by optimally using the world resources(c) Developing a more integrated, feasible and stable trading systemFunctions of the WTO(a) Providing an environment to the member countries such that they can put forward their grievances before the WTO without any hesitation(b) Resolving trade disputes among member nations(c) Eliminating discriminations in trade relations by laying down a commonly accepted code of conduct(d) Creating better understanding between member countries by consulting with the IMF, the World Bank and various other World Bank affiliates.