The document NCERT Solutions - Formation of a Company Commerce Notes | EduRev is a part of the Commerce Course Business Studies (BST) Class 11.
All you need of Commerce at this link: Commerce

True/False Answer Questions1. It is necessary to get every company incorporated, whether private or public

2. Statement in lieu of prospectus can be filed by a public company going for a public issue

3. A private company can commence business after incorporation.

4. Expert who help promoters in the promotion of a company are also called promoters.

5. A company can ratify preliminary contracts after incorporation.

6. If a company is registered on the basis of fictitious names, its incorporation is invalid.

7. 'Articles of association' is the main document of a company.

Answer: False8. Every company must file Articles of Association.

9. A provisional contract is signed by promoters before the incorporationof the company.

10. If a company suffers heavy losses and its assets are not enough to pay off its liabilities, the balance can be recovered from the private assets of its members.

Question 1. Name the stages in the formation of a company.

Answer : The formation of a company is a complex process which involves various stages. The following are the sequential stages.(a) Promotion: This involves taking the initiative to form a company and promoting it.(b) Incorporation: This step involves the formation of the company as a separate legal entity.(c) Subscription of capital: In this stage, funds are raised in the form of shares and debentures.(d) Commencement of business: This stage implies the completion of the formalities and the commencement of business by the company.Question 2. List the documents required for the incorporation of a company. Answer: An entrepreneur needs to submit the following documents for the incorporation of a company.(a) Memorandum of association.(b) Articles of association.(c) Written approval of the proposed directors to function as directors and an undertaking to buy the qualification shares.(d) An agreement naming the proposed managing director or a manager or a full-time director, if any.(e) A copy of the letter obtained from the registrar concerned approving the company name proposed.(f) A legal confirmation by the law stating the submission of all documents and requirements for registration.(g) The exact address of the registered office.(h) Documentary evidence of payment of the registration fee.

Question 3. What is a prospectus? Is it necessary for every company to file a prospectus?Answer: A prospectus is an advertisement or an invitation from a company to the general public to subscribe or purchase shares or debentures issued by the company. This invitation to purchase shares is also known as the initial public offering (IPO), through which a public company can raise the funds it requires. However, in the case of a private company, it is not necessary to file a prospectus as it is prohibited from raising funds from the public. Only a company that needs to raise funds from the general public by issuing shares or debentures is required to file a prospectus.Question 4. Briefly explain the term 'Return of Allotment'.

Answer: In the promotion stage of a company, the promoters are required to submit the name and addresses of the shareholders along with the number of shares allotted to them. The statement that contains this information is known as ‘return of allotment’.Question 5. At which stage in the formation of a company does it interact with SEBI?Answer: A company interacts with the Securities and Exchange Board of India (SEBI) at the stage of capital subscription. This is because, at this stage of formation, the company is required to raise its funds from the general public through the medium of issue of shares and debentures. To do so, the company is required to follow the rules and guidelines prescribed by SEBI in order to protect the investors’ interests. Thus, it is necessary for the company to get SEBI’s approval before proceeding with capital subscription.Long Answer QuestionsQuestion 1. What is meant by the term 'promotion'? Discuss the legal position of promoters with respect to a company promoted by them.Answer : Promotion refers to the process of innovating or discovering the idea of formation of a company and developing it into a concrete form. It is the very first stage in the process of formation of a company. It starts when an individual or a group of individuals discovers an idea about a business that has the potential to be converted into a successful business opportunity. If they proceed further to form a company, then they are said to be the promoters of the company. Thus, in simpler terms, a promoter is one who takes the initiative to form a company with reference to a given idea or project and takes the steps necessary to fulfil this purpose. Besides discovering the business opportunity, the promoter is responsible for analysing the future prospects of the company and acquires the inputs necessary to establish the company, such as labour, capital and machinery. In this regard, the following are the legal liabilities of the promoters towards the company, which highlight their legal position with respect to the company.(i) The promoters are neither the trustees nor the agents of the company that they are forming. This is because the company does not exist as a legal entity before its incorporation.(ii) They cannot make any secret profits by making deals on behalf of the company.(iii) They are legally liable for any untrue statement filed in the prospectus of the company.(iv) The promoters cannot claim the expenses incurred by them during the promotion of the company.(v) The company may or may not indemnify the promoters for the payments made before its incorporation. The company may choose to allot shares to them in order to compensate for their services.Question 2. Explain the steps taken by promoters in the promotion of a company.

Answer: A promoter is a person who takes the initiative to form a company with reference to a given idea or a project and also takes the steps necessary to fulfil this purpose. Besides discovering the business opportunity, the promoter is also responsible for analysing the future prospects of the company and acquiring the inputs necessary, such as labour, capital and machinery, to run the company successfully.The following steps are taken by the promoters for the promotion of the company.(i) Conceiving a business idea: First, a promoter discovers the idea for the formation of a company. If this idea is good enough to be considered and worth investing in, then its profitability or economic feasibility is analysed.(ii) Checking the feasibility of the idea: As the idea may or may not be feasible enough to be converted into a successful business, it has to be studied in detail depending on its nature. In this regard, the following studies are made with the help of charted accountants, engineers, accountant, etc.(a) Technical feasibility: In some cases, the idea may be good enough but technically unfeasible. This may happen if the technology or raw material required to execute the project is not easily accessible. Therefore, the technical feasibility of the idea has to be considered before proceeding further.(b) Financial feasibility: Every organisation requires capital to start functioning and sustain itself. The promoters have to assess the cost of implementing the idea. Thus, in case the cost of the project is huge and the project cannot be financed within the funds available, then the idea may have to be dropped.(c) Economic feasibility: In some cases, the project may be technically and financially feasible but the probability of its success may be very low. In such cases, too, the idea will have to be given up.(iii) Selecting the company’s name: Once the decision to establish a company is made, the promoters need to select a name for it. For securing approval for the proposed name, an application has to be submitted to the registrar of companies of the state concerned. This application must contain at least three names in the order of their preference. This is because, in some cases, it may happen that the name most preferred may not be approved if another company by the same name already exists. Thus, in such cases, an alternative name that is proposed is approved.(iv) Selecting the members to sign the memorandum of association (MoA): The promoters are required to select the members for signing the MoA. In this regard, the members who generally sign the MoA become the first directors of the company.(v) Appointing professionals: The promoters are required to appoint professionals—bankers, brokers, solicitors and underwriters—for preparing the documents necessary for the company. The details of the number of shares allotted to each shareholder, along with his or her addresses for correspondence, are submitted to the registrar.(vi) Preparing all the documents necessary: After the appointment of professionals, the promoters are required to submit the legal documents necessary (such as the MoA, articles of association and consent of directors) to the registrar of companies.Question 3. What is 'Memorandum of Association'? Briefly explain its clauses.

Answer: A memorandum of association (MoA) is the most essential document in the formation of a company as it highlights the company’s main objectives and goals. The MoA regulates the activities of the incorporated company in such a manner that the company can legally undertake only those activities that are mentioned in the MoA. This document must be signed by at least seven members in the case of a public company and by two persons in the case of a private company. The following are the main clauses of the MoA(a) The name clause: This includes the name of the company which has already been approved by the registrar of companies. It is the name by which the company will be known.(b) Registered-office clause: This clause mentions the name of the state where the registered office of the company is situated. It is not mandatory to submit the exact address of the registered office at this stage. However, the address needs to be submitted within 30 days of incorporation of the company.(c) Objects clause: This is the most important clause in the MoA as it defines the main objective of the company for which it was formed. The company cannot undertake activities that are not stated in the objects clause. The objects clause is divided into the following two sub-clauses.(i) The main objects: This sub-clause lists the main objects for which the company is formed. Any clause that is essential for the achievement of the main objectives is considered valid even if it is not contained in the sub-clause.(ii) Other objects: Objects that are not included in the main-objects clause can be included in this sub-clause. If a company wants to initiate a business activity that is mentioned in this clause, it is required to pass either an ordinary resolution or a special resolution to get the consent of the central government.(d) Liability clause: This clause states the liability of each shareholder according to the amount unpaid by them for the shares they own.(e) Capital clause: This clause defines the authorised capital of the company which it can raise through the issue of shares. It also states the division of the number of shares.(f) Association clause: This clause contains the statement by the signatories to the MoA giving their approval to be a part of the company. They also give their consent to buy the qualification shares of the company. 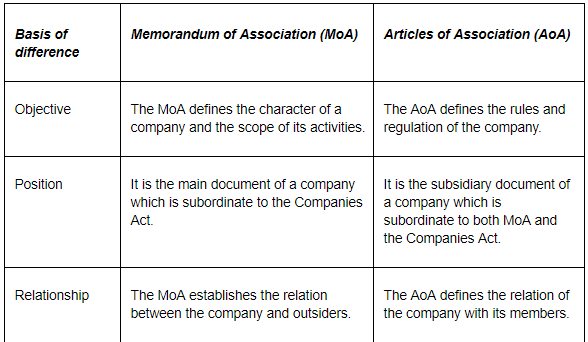