The document NCERT Solutions Chapter 10 - Circles (I), Class 9, Maths Class 9 Notes | EduRev is a part of Class 9 category.
All you need of Class 9 at this link: Class 9

2. Write True or False: Give reasons for your answers.
(i) Line segment joining the centre to any point on the circle is a radius of the circle.
(ii) A circle has only finite number of equal chords.
(iii) If a circle is divided into three equal arcs, each is a major arc.
(iv) A chord of a circle, which is twice as long as its radius, is a diameter of the circle.
(v) Sector is the region between the chord and its corresponding arc.
(vi) A circle is a plane figure.

Answer
(i) True.
All the line segment from the centre to the circle is of equal length.
(ii) False.
We can draw infinite numbers of equal chords.
(iii) False.
We get major and minor arcs for unequal arcs. So, for equal arcs on circle we can't say it is major arc or minor arc.
(iv) True.
A chord which is twice as long as radius must pass through the centre of the circle and is diameter to the circle.
(v) False.
Sector is the region between the arc and the two radii of the circle.
(vi) True.
A circle can be drawn on the plane.

1. Recall that two circles are congruent if they have the same radii. Prove that equal chords of congruent circles subtend equal angles at their centres. 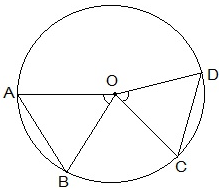 2. Prove that if chords of congruent circles subtend equal angles at their centres, then the chords are equal.

1. Draw different pairs of circles. How many points does each pair have in common? What is the maximum number of common points?

No point is common.

One point P is common. 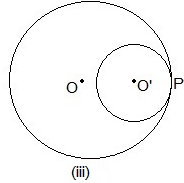 One point P is common. 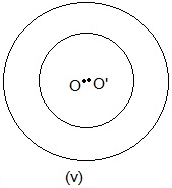 No point is common.

2. Suppose you are given a circle. Give a construction to find its centre. 3. If two circles intersect at two points, prove that their centres lie on the perpendicular bisector of the common chord. 1. Two circles of radii 5 cm and 3 cm intersect at two points and the distance between their centres is 4 cm. Find the length of the common chord. 2. If two equal chords of a circle intersect within the circle, prove that the segments of one chord are equal to corresponding segments of the other chord.

Answer
Given,
AB and CD are chords intersecting at E.
AB = CD
To prove,
AE = DE and CE = BE
Construction,
OM ⊥ AB and ON ⊥ CD. OE is joined. 3. If two equal chords of a circle intersect within the circle, prove that the line joining the point of intersection to the centre makes equal angles with the chords.

Given,
AB and CD are chords intersecting at E.
AB = CD, PQ is the diameter.
To prove,
∠BEQ = ∠CEQ
Construction,
OM ⊥ AB and ON ⊥ CD. OE is joined. 6. A circular park of radius 20m is situated in a colony. Three boys Ankur, Syed and David are sitting at equal distance on its boundary each having a toy telephone in his hands to talk each other. Find the length of the string of each phone. 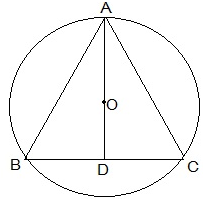