Thinking about the TextI. Answer these questions. Q.1. “At last a sympathetic audience.”(i) Who says this?(ii) Why does he say it?(iii) Is he sarcastic or serious?Ans. (i) The speaker of the given line is Gerrard.(ii) He says it as he is asked by the intruder to speak about himself.(iii) He speaks the given dialogue sarcastically.Q.2. Why does the intruder choose Gerrard as the man whose identity he wants to take on?Ans. Gerrard looks much like the intruder. The intruder is a murderer. The police are after him. He hopes he can easily impersonate Gerrard to escape being caught.Q.3. “I said it with bullets.”(i) Who says this?(ii) What does it mean?(iii) Is it the truth? What is the speaker’s reason for saying this?Ans. (i) Gerrard says this.(ii) It means that when things went wrong, he had used his gun to shoot someone for his escape.(iii) No, it is not the truth. The speaker says this to save himself from getting shot by the intruder.Q.4. What is Gerrard’s profession? Quote the parts of the play that support your answer.Ans. Gerrard is a playwright by profession. Several parts of the play that reflect this.Some of these are:

Q.6. “They can’t hang me twice.”(i) Who says this?(ii) Why does the speaker say it?Ans. (i) The intruder says the line.(ii) The intruder had been telling Gerrard that he had murdered one man and that he would not shy away from murdering him too. This is because the police could not hang him twice for two murders.Q.7. “A mystery I propose to explain.” What is the mystery the speaker proposes to explain?Ans.

Q.8. “This is your big surprise.”(i) Where has this been said in the play?(ii) What is the surprise?Ans. (i) This has been said twice in the play. On the first occasion, it is spoken by the intruder while revealing his plan to kill Gerrard. Secondly, it is spoken by Gerrard before he reveals his fictitious identity to the intruder.(ii) The intruder's surprise is his plan to kill Gerrard and take on his identity to lead a secure and hassle-free life. Whereas, Gerrard's surprise is his fictitious identity, his way of refraining the intruder from killing him.

We use a slightly different tone of voice when we use these words ironically.Read the play carefully and find the words and expressions Gerrard uses in an ironic way. Then say what these expressions really mean. Two examples have been given below. Write down three such expressions along with what they really mean. 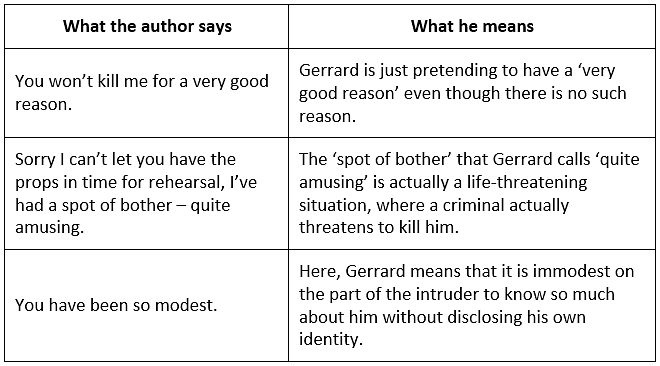 The document NCERT Solutions - If I Were You Notes | Study English Class 9 - Class 9 is a part of the Class 9 Course English Class 9.
All you need of Class 9 at this link: Class 9
Join Course