(b) The rulers of Aryavarta brought tribute for Samudragupta.Ans. False

(c) There were twelve rulers in Dakshinapatha.Ans. True

(d) Taxila and Madurai were important centres under the control of the Gupta rulers.Ans. False

(e) Aihole was the capital of the Pallavas.Ans. False 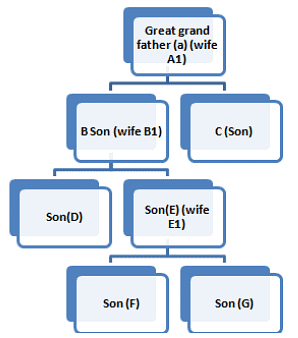 (a) I am (g) I am a small boy.(b) My father is (E) and mother (E1).(c) My grandfather (B) and grandmother (B1).(d) My great grandfather is (a) and My great grandmother is (A1).Q.8. How do you think wars affect the lives of ordinary people today?Ans. In the present times, the wars will adversely affect the lives of the peopleExample:1. The economy of the country is disturbed and prices of the essential commodities also start booming.2. There can be large scale destruction, caused due to air warfare.3. Chemical warfare and use of nuclear bombs can affect not only the present generation but also many generations to come. It may also lead to environmental degradation.