The document NCERT Solutions: Respiration in Plants Notes | Study Biology Class 11 - NEET is a part of the NEET Course Biology Class 11.
All you need of NEET at this link: NEET

(b) Glycolysis and Krebs cycle

Ques 3: Give the schematic representation of glycolysis?Ans 3: 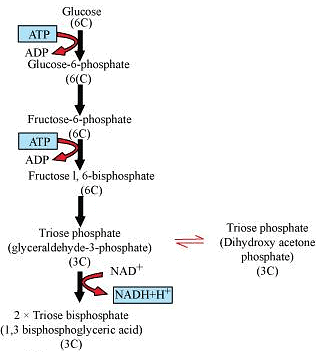 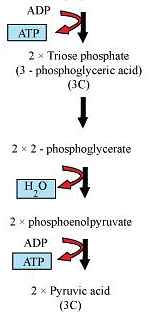 Ques 5:  Give the schematic representation of an overall view of Krebs cycle.Ans 5: 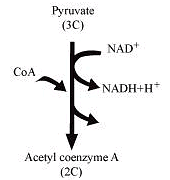 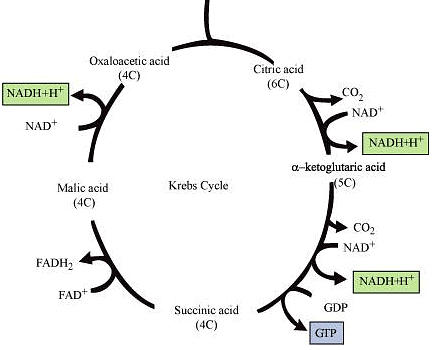 Ques 6: Explain ETS. Ans 6: ETS or electron transport system is located in the inner mitochondrial membrane. It helps in releasing and utilizing the energy stored in NADH + H+ and FADH2. NADH + H+ , which is formed during glycolysis and citric acid cycle, gets oxidized by NADH dehydrogenase (complex I). The electrons so generated get transferred to ubiquinone through FMN. In a similar manner, FADH2 (complex II) generated during citric acid cycle gets transferred to ubiquinone. The electrons from ubiquinone are received by cytochrome bc1 (complex III) and further get transferred to cytochrome c. The cytochrome c acts as a mobile carrier between complex III and cytochrome c oxidase complex, containing cytochrome a and a3, along with copper centres (complex IV).

During the transfer of electrons from each complex, the process is accompanied by the production of ATP from ADP and inorganic phosphate by the action ATP synthase (complex V). The amount of ATP produced depends on the molecule, which has been oxidized. 2 ATP molecules are produced by the oxidation of one molecule of NADH. One molecule of FADH2, on oxidation, gives 3 ATP molecules. 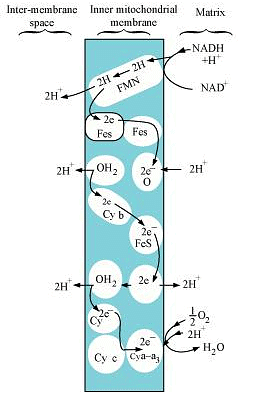 (b) Glycolysis and Fermentation

(a) It is assumed that various parts of aerobic respiration such as glycolysis, TCA cycle, and ETS occur in a sequential and orderly pathway.(b) NADH produced during the process of glycolysis enters into mitochondria to undergo oxidative phosphorylation.

(c) Glucose molecule is assumed to be the only substrate while it is assumed that no other molecule enters the pathway at intermediate stages.

(d) The intermediates produced during respiration are not utilized in any other process.

It can be illustrated through the example of tripalmitin fatty acid, which consumes 145 molecules of O2 for respiration while 102 molecules of CO2 are evolved. The RQ value for tripalmitin is 0.7.Ques 11: What is oxidative phosphorylation?Ans 11: Oxidative phosphorylation is a process in which electrons are transferred from electron donors to oxygen, which acts as electron acceptor. The oxidation-reduction reactions are involved in the formation of proton gradient.The main role in oxidative phosphorylation is played by the enzyme ATP synthase (complex V). This enzyme complex consists of F0 and F1 components. The F1 headpiece is a peripheral membrane protein complex and contains the site for ATP synthesis from ADP and inorganic phosphate. F0 component is a part of membrane protein complex, which acts as a channel for crossing of the protons from inner mitochondrial membrane to the mitochondrial matrix. For every two protons passing through F0–F1 complex, synthesis of one ATP molecule takes place.

Ques 12: What is the significance of step-wise release of energy in respiration? Ans 12: The process of aerobic respiration is divided into four phases – glycolysis, TCA cycle, ETS, and oxidative phosphorylation. It is generally assumed that the process of respiration and production of ATP in each phase takes place in a step-wise manner.

Fig: Food is use to energize ATP

The product of one pathway forms the substrate of the other pathway. Various molecules produced during respiration are involved in other biochemical processes. The respiratory substrates enter and withdraw from pathway on necessity. ATP gets utilized wherever required and enzymatic rates are generally controlled. Thus, the step-wise release of energy makes the system more efficient in extracting and storing energy.

The document NCERT Solutions: Respiration in Plants Notes | Study Biology Class 11 - NEET is a part of the NEET Course Biology Class 11.
All you need of NEET at this link: NEET