The document NCERT Solutions - Chapter 3 - Production and Costs, Class 12, Economics | EduRev Notes is a part of the UPSC Course Economics Class 12.
All you need of UPSC at this link: UPSC

Question 2 : What is the total product of an input?Answer : Total product is defined as the sum total of output produced by a firm by employing a particular input. It is also known as the Total Physical Product and is represented as

Where, ∑ represents summation of all outputs and Qx represents units of output x produced by an input. 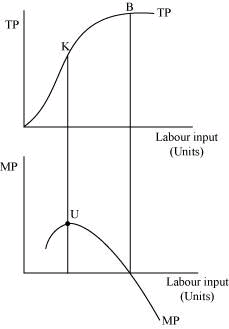 1) TP increases at an increasing rate till point K, when more and more units of labour are employed. The point K is known as the point of inflexion. At this point MP (second part of the figure) attains its maximum value at point U.2) After point K, TP increases but at a decreasing rate. Simultaneously, MP starts falling after reaching its maximum level at point U.3) When TP curve reaches its maximum and becomes constant at point B, MP becomes zero.4) When TP starts falling after B, MP becomes negative.5) MP is derived from TP by

Question 6: Explain the concepts of the short run and the long run.Answer : Short run : In short run, a firm cannot change all the inputs, which means that the output can be increased (decreased) only by employing more (less) of the variable factor (labour). It is generally assumed that in short run a firm does not have sufficient or enough time to vary its fixed factors such as, installing a new machine, etc. Hence, the output levels vary only because of varying employment levels of the variable factor.Algebraically, the short run production function is expressed as

= constant units of capitalLong run : In long run, a firm can change all its inputs, which means that the output can be increased (decreased) by employing more (less) of both the inputs − variable and fixed factors. In the long run, all inputs (including capital) are variable and can be changed according to the required levels of output. The law that explains this long run concept is called returns to scale. The long run production function is expressed asQx = f (L, K)Both L and K are variable and can be varied.

Question 10 : When does a production function satisfy increasing returns to scale?Answer : Increasing returns to scale (IRS) holds when a proportional increase in all the factors of production leads to an increase in the output by more than the proportion. For example, if both the labour and the capital are increased by ‘n’ times, and the resultant increase in the output is more than ‘n’ times, then we say that the production function exhibits IRS.Algebraically, IRS exists whenf(nL, nK) > n. f(L, K)

Page No 50:Question 11 : When does a production function satisfy decreasing returns to scale?Answer : Decreasing returns to scale (DRS) holds when a proportional increase in all the factors of production leads to an increase in the output by less than the proportion. For example, if both labour and capital are increased by ‘n’ times but the resultant increase in output is less than ‘n’ times, then we say that the production function exhibits DRS.Algebraically, DRS exists when f(nL, nK) < n. f(L, K)

Question 13 : What are the total fixed cost, total variable cost and total cost of a firm? How are they related?Answer : Total Fixed Cost (TFC)This refers to the costs incurred by a firm in order to acquire the fixed factors for production like cost of machinery, buildings, depreciation, etc. In short run, fixed factors cannot vary and accordingly the fixed cost remains the same through all output levels. These are also called overhead costs.Total Variable Cost (TVC)This refers to the costs incurred by a firm on variable inputs for production. As we increase quantities of variable inputs, accordingly the variable cost also goes up. It is also called ‘Prime cost’ or ‘Direct cost’ and includes expenses like − wages of labour, fuel expenses, etc.Total Cost (TC)The sum of total fixed cost and total variable cost is called the total cost.Total cost = Total fixed cost + Total variable costTC = TFC + TVC 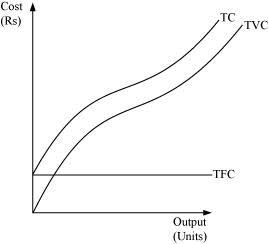 Relationship between TC, TFC, and TVC1) TFC curve remains constant throughout all the levels of output as fixed factor is constant in short run.2) TVC rises as the output is increased by employing more and more of labour units. Till point Z, TVC rises at a decreasing rate, and so the TC curve also follows the same pattern.3) The difference between TC and TVC is equivalent to TFC.4) After point Z, TVC rises at an increasing rate and therefore TC also rises at an increasing rate.5) Both TVC and TFC is derived from TC i.e. TC = TVC + TFC

Question 14 : What are the average fixed cost, average variable cost and average cost of a firm? How are they related?ANSWER: Average Fixed Cost:It is defined as the fixed cost per unit of output.

Where,TFC = Total fixed costQ = Quantity of output producedAverage Variable Cost:It is defined as the variable cost per unit of output. 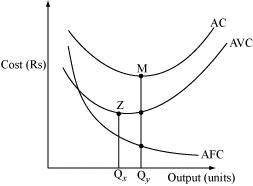 Relationship between AC, AFC, AVC:1) AVC and AFC are derived from AC as AC = AFC + AVC.2) The plot for AFC is a rectangular hyperbola and falls continuously as the quantity of output increases.3) The minimum point of AVC will always exist to the left of the minimum point of AC; i.e., point ‘Z’ will always lie left to point ‘M’.4) AFC being a rectangular hyperbola falls throughout; this causes the difference between AC and AVC to keep decreasing at higher output levels. However, it should be noted that AVC and AC can never intersect each other. If they intersect at any point, it would imply that AC and AVC are equal at that point. However, this is not possible as AFC will never be zero because it is a rectangular hyperbola that never touches x-axis.5) AC inherits shape from AVC’s shape and it is because of law of variable proportions that both the curves are U-shaped.

Question 16 : What does the average fixed cost curve look like? Why does it look so?Answer : Average fixed cost curve looks like a rectangular hyperbola. It is defined as the ratio of TFC to output. We know that TFC remains constant throughout all the output levels and as output increases, with TFC being constant, AFC decreases. When output level is close to zero, AFC is infinitely large and by contrast when output level is very large, AFC tends to zero but never becomes zero. AFC can never be zero because it is a rectangular hyperbola and it never intersects the x-axis and thereby can never be equal to zero. 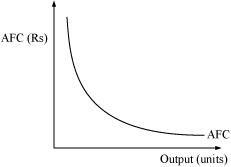 Question 17 : What do the short run marginal cost, average variable cost and short run average cost curves look like?Answer : The short run marginal cost (SMC), average variable cost (AVC) and short run average cost (SAC) curves are all U-shaped curves. The reason behind the curves being U-shaped is the law of variable proportion. In the initial stages of production in the short run, due to increasing returns to labour, all the costs (average and marginal) fall. In addition to this in the short run MP of labour also increases, which implies that more output can be produced by per additional unit of labour, leading all the costs curves to fall. Subsequently with the advent of constant returns to labour, the cost curves become constant and reach their minimum point (representing the optimum combination of capital and labour). Beyond this optimum combination, additional units of labour increase the cost, and as MP of labour starts falling, the cost curve starts rising due to decreasing returns to labour. 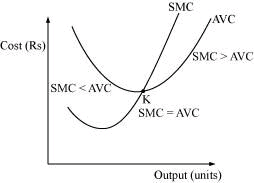 Question 20 : Why is the short run marginal cost curve ‘U’-shaped?Answer : 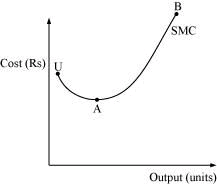 Question 21 : What do the long run marginal cost and the average cost curves look like?Answer : The long run marginal cost (LMC) and long run average cost (LAC) are U shaped curves. The reason behind them being U-shaped is due to the law of returns to scale. It is argued that a firm generally experiences IRS during the initial period of production followed by CRS, and lastly by DRS. Consequently, both LAC and LMC are U-shaped curves. Due to IRS, as the output increases, LAC falls due to economies of scale. Then falling LAC experiences CRS at Q1 level of output which is also called the optimum capacity. Beyond Q1 level of output, the firm experiences diseconomies of scale and if the firm continues to produce beyond Q1 level, the cost of production will rise. 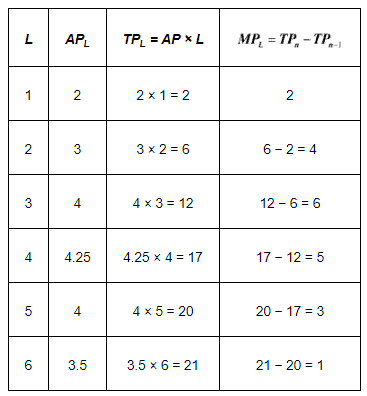 Question 26 : The following table gives the total cost schedule of a firm. It is also given that the average fixed cost at four units of output is Rs 5/-. Find the TVC, TFC, AVC, AFC, SAC and SMC schedules of the firm for the corresponding values of output.Answer :

Question 27 : A firm’s SMC schedule is shown in the following table. The total fixed cost of the firm is Rs 100/-. Find the TVC, TC, AVC and SAC schedules of the firm.

Answer :
Question 28 : Let the production function of a firm be

Find out the maximum possible output that the firm can produce with 100 units of L and 100 units of K.Answer :

Putting these values in equation (1)

Thus, the maximum possible output that he firm can produce is 500 units.