The document NCERT Solutions - A Truly Beautiful Mind Notes | Study English Class 9 - Class 9 is a part of the Class 9 Course English Class 9.
All you need of Class 9 at this link: Class 9 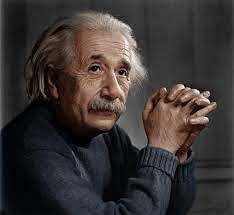 Thinking About the Text

Q1. Here are some headings for paragraphs in the text. Write the number(s) of the paragraph(s) for each title against the heading. The first one is done for you.(i) Einstein’s equation (ii) Einstein meets his future wife (iii) The making of a violinist (iv) Mileva and Einstein’s mother (v) A letter that launched the arms race (vi) A desk drawer full of ideas (vii) Marriage and divorce

Q2. Who had these opinions about Einstein?(i) He was boring.(ii) He was stupid and would never succeed in life.(iii) He was a freak.
Ans:(i) Einstein’s playmates thought that he was bored.(ii) Einstein’s headmaster thought that he was stupid and would never succeed at anything in life.(iii) Einstein’s mother thought that he was a freak.Q3. Explain the reasons for the following:(i) Einstein leaving the school in Munich for good.(ii) Einstein wanting to study in Switzerland rather than in Munich.(iii) Einstein seeing in Mileva an ally.(iv) What do these tell you about Einstein?
Ans:
(i) Einstein left the school in Munich for good because he hated the school’s regimentation.(ii) Einstein wanted to study in Switzerland rather than in Munich because it was a more liberal city.(iii) Einstein found in Mileva an ally because she, like him, disapproved of the “philistines” or the people who did not like art, literature or music.(iv) These told about Einstein that he loved freedom. He was a liberal and cultured person.Q4. What did Einstein call his desk drawer at the patent office? Why?
Ans: Einstein called his desk drawer at the patent office the “bureau of theoretical physics”. This was because the drawer was where he used to store his secretly developed ideas.Q5. Why did Einstein write a letter to Franklin Roosevelt?
Ans: Einstein wrote a letter to Franklin Roosevelt to warn about the bomb effect and also wanted to encourage them to make a bomb to utilize its destruction potential.Q6. How did Einstein react to the bombing of Hiroshima and Nagasaki?
Ans: Einstein was deeply shaken by the extent of destruction caused in Hiroshima and Nagasaki. He wrote a public missive to the United Nations. He proposed the formation of a world government to stop the use of nuclear weapons. Q7. Why does the world remember Einstein as a “world citizen”?
Ans: Einstein is remembered as a “world citizen” as much as a genius scientist because of his efforts towards world peace and democracy, and for his crusade against the use of arms.Q8. Here are some facts from Einstein’s life. Arrange them in chronological order.
Ans:(i) Einstein is born in the German city of Ulm.(ii) Einstein attends a high school in Munich.(iii) Einstein’s family moves to Milan.(iv) Tired of the school’s regimentation, Einstein withdraws from school.(v) Einstein joins a university in Zurich, where he meets Mileva.(vi) He works in a patent office as a technical expert.(vii) Einstein publishes his special theory of relativity.(viii) He provides a new interpretation of gravity.(ix) He is awarded the Nobel Prize in Physics.(x) When Hitler comes to power, Einstein left Germany for the United States.(xi) Einstein writes a letter to U.S. President, Franklin D. Roosevelt, and warns against Germany’s building of an atomic bomb.(xii) Einstein dies.