Q1. Based on your reading of the story, answer the following questions by choosing the correct option.

(a) The narrator says that John was “______ of the stuff that heroes are not often lucky enough to be made of.” His tone is sarcastic because __________(i) he hated John.(ii) he felt that John was a threat to him.(iii) John was not particularly good-looking.(iv) nobody liked John.

(b) Pescud felt that best-sellers were not realistic as____________(i) American farmers had nothing in common with European princesses.(ii) men generally married girls from a similar background.(iii) American men married girls who studied in America.(iv) American men did not know to fence and were beaten by the Swiss guards.

(d) The narrator says that life has no geographical bounds implying that __________(i) human beings are essentially the same everywhere.(ii) boundaries exist only on maps.(iii) one should work towards the good of mankind.(iv) he was happy to travel to other countries.

Ans : (i) human beings are essentially the same everywhere.

(a) One day last summer the author was travelling to Pittsburg by chair car. What does he say of his co-passengers?

Ans : The compartment was full of affluent people, men, and women, sitting in their chair-cars. Women were fashionably dressed in brown silk dresses with laces andveils. Men appeared to be travelling on account of the business.

(b) Who was the passenger of chair no. 9? What did he suddenly do?

Ans : The passenger in chair no. 9 appeared to be very familiar and when he turned and dropped his book, it was confirmed that he was an old friend of the writer, namedas John A. Pescud of Pittsburg.

(c) What was John Pescud’s opinion about bestsellers?

Ans : Pescud believed that the stories about bestsellers were not realistic. The themes revolved around romances between royals and commoners, fencing, imaginative encounters and all the stuff that never happens in real life. In real life, one would always select a prospective bride from a similar background.

(d) What does John say about himself since his last meeting with the author?

Ans : John had prospered a lot. His salary was doubled, he had got commission and he had also invested in real estate. Shortly he was also going to acquire some shares ofhis company.

(e) How did John’s first meeting with Jessie’s father go?

Ans : John’s first meeting with Jessie’s father was successful since it sets the tone for a possible alliance in the future. John not only made his proposal, stated his intentions in clear terms, but also made Jessie’s father laugh with his anecdotes and stories.

(f) Why did John get off at Coketown?

Ans : Jessie had fancied some petunias in one of the windows and she wanted to plant them in her new house. So Pescud thought of dropping at Coketown to dig or getsome cuttings of flowers for her.

(g) John is a hypocrite. Substantiate this statement. Do you agree?

Ans : Yes, John does come across as a hypocrite. He criticises and mocks the stories of best-sellers calling them melodramatic and unrealistic. In real life, he behaves likethe hero of a bestseller, chasing his girl, across various towns and stations, and proposes to her despite her royal connections.

(h) Describe John A. Pescud with reference to the following points.

Q3. Complete the flow chart in the correct sequence as it happens in the story.

Hint: It begins from the time John Pescud first saw Jessie till the time they marry.

Ans : The correct sequence is as follows : 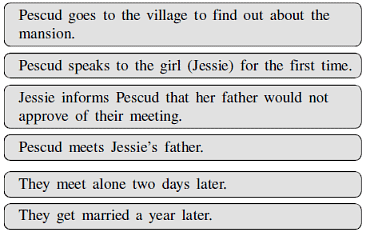 Q4. Irony refers to the use of words to convey a meaning that is the opposite of their literal meaning. Working in pairs, bring out the irony in the following :

(a) The title of the story, “The Bestseller”.

Ans : The Best Seller is supposed to be the most popular and likable. But John Pescud throws the best seller “The Rose Lady and Trevelyan” to the floor of the chair car. Helater says that all bestsellers have the same unrealistic romantic stories.

(b) Pescud’s claim, “When people in real life marry, they generally hunt up somebody in their own status. A fellow usually picks out a girl who went to the same high school and belonged to the same kind of society that he did.”

Ans : Pescud told the author that, unlike the stories of the bestsellers, in real life, people marry somebody in their own place. A fellow usually picks out a girl who went to the same high school and belonged to the same kind of society. But the irony is that he himself marries a girl unknown to him who lived at a far off place and belonged to a completely different background.

The document NCERT Solutions - Best Seller Notes | Study English Class 9 - Class 9 is a part of the Class 9 Course English Class 9.
All you need of Class 9 at this link: Class 9
Join Course