The document NCERT Solutions Chapter 5 - Minerals and Energy Resources, Class 10, SST Notes - Class 10 is a part of Class 10 category.
All you need of Class 10 at this link: Class 10

(i) Which one of the following minerals is formed by decomposition of rocks, leaving a residual mass of weathered material?

(ii) Koderma, in Jharkhand is the leading producer of which one of the following minerals?

(iii) Minerals are deposited and accumulated in the stratas of which of the following rocks?

(d) none of the above

(iv) Which one of the following minerals is contained in the Monazite sand?

2. Answer the following questions in about 30 words.

(i) Distinguish between the following in not more than 30 words.

(a) Ferrous and non-ferrous minerals

(iii) How are minerals formed in igneous and metamorphic rocks?

(iv) Why do we need to conserve mineral resources? 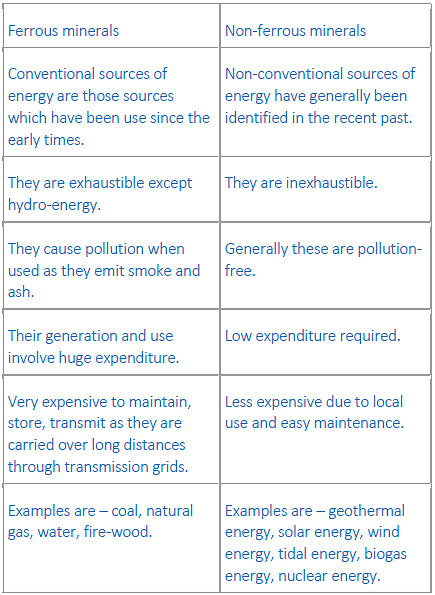 (ii) A mineral is a homogeneous, naturally occurring substance with a definable interior structure.

(iii) In igneous and metamorphic rocks, molten/liquid and gaseous minerals are forced upwards into the cracks. They then solidify and form veins or lodes.

(iv) It takes millions of years for the formation of minerals.

(i) Describe the distribution of coal in India.

(ii) Why do you think that solar energy has a bright future in India?

→ The major resources of metallurgical coal belong to the Gondwana age and are located mainly in the north eastern part of the peninsula.

→ Coal is also found in the Godavari, Mahanadi, Son and Wardha valleys. Korba in Chhattisgarh, Singrauli and Penahkanhan valley in Madhya Pradesh, Talcher in Orissa, Kamptee and Chandrapur in Maharashtra and Singareni of Andhra Pradesh are important coal mines.

→ Principal lignite reserves are found in Neyveli in Tamil Nadu.

(ii) Solar energy has a bright future in India because –

→ India being a tropical country receives sunlight in abundance throughout the year.

→ Solar plants can be easily established in rural and remote areas.

→ It will minimize the dependence of rural households on firewood and dunk cakes which in turn will contribute to environmental conservation and adequate supply of manure in agriculture.

The document NCERT Solutions Chapter 5 - Minerals and Energy Resources, Class 10, SST Notes - Class 10 is a part of Class 10 category.
All you need of Class 10 at this link: Class 10