The document NCERT Solutions - Panchayati Raj Class 6 Notes | EduRev is a part of the UPSC Course Social Studies (SST) Class 6.
All you need of UPSC at this link: UPSC

Q1. What problem did the villagers in Hardas village face? What did they do to solve this problem?

Answer: Problem faced by the villagers in Hardas village: 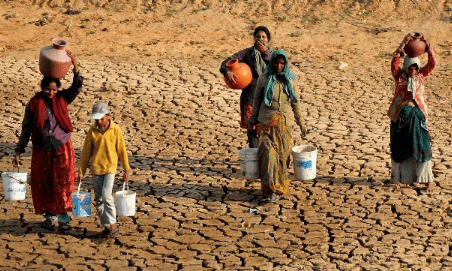 (i) Acute water shortage.(ii) Hand pump water has gone well below the point up to which the ground has been drilled.(iii) Women have to go to the Suru river which is 3 k.m. away to get water.Solution done by them to solve this problem:(i) Piping water from the river Suru and making an overhead tank in the village.(ii) Deepen the handpumps and clean the wells for this season.(iii) Finally, they came with the permanent solution of conserving water or the watershed development.

Q2. What, in your opinion, is the importance of the Gram Sabha? Do you think all members should attend Gram Sabha meetings? Why?

Answer: Importance of Gram Sabha:(i) Gram Sabha elect the members of the Gram Panchayat.(ii) It can question Gram Panchayat  and keep watch on their work.(iii) Local problems of the villagers can be discussed in the meeting.(iv) They can recommend solutions to the problems.Yes, I think all members should attend Gram Sabha meetings because they can raise the problems faced by them daily. They can also advise and make aware of the work done by the Gram Panchayat. It is the forum where they can discuss the welfare programmes of the village.

Q3. What is the link between a Gram Sabha and a Gram Panchayat? Q4. Take an example of any one task done by a Panchayat in your area/nearby rural area and find out the following: a. Why it was taken up. b. Where the money came from. c. Whether or not the work has been completed.

Q5. What is the difference between a Gram Sabha and a Gram Panchayat?

Members of Gram Sabha are not elected.

All the adults who is above the age of 18 or have the right to vote are the members of Gram Sabha.

The members and the body are permanent.

They keep an eye on the works of Gram Panchayat.

Members of Gram Panchayat are elected representatives by the Gram Sabha.

Ward members, Panchs and Panchayat president are the members of Gram Panchayat.

The members and the body are elected after every 5 years.

They hear from the Gram Sabha and do the work.

6. Read the following news item.Nimone is a village on the Chauphula-Shirur Road. Like many others, this village has also been facing a severe water shortage for the last few months and villagers depend on tankers for all their needs. Bhagvan Mahadeo Lad (35) of this village was beaten with sticks, iron rods and axes by a group of seven men. The incident came to light when some villagers brought a badly injured Lad to hospital for treatment. In the FIR recorded by the police Lad said that he was attacked when he insisted that the water in the tanker must be emptied into the storage tanks constructed as part of the water supply scheme by Nimone Gram Panchayat so that there would be equal distribution of water. However, he alleged that the upper caste men were against this and told him that the tanker water was not meant for the lower castes. Adapted from Indian Express, May 1, 2004 a. Why was Bhagvan beaten? b. Do you think that the above is a case of discrimination? Why?

Answer: (a) Bhagvan was beaten when he insisted that the water in the tanker must be emptied into the storage tanks constructed as part of the water supply scheme by Nimone Gram Panchayat so that there would be equal distribution of water.

Q7. Find out more about watershed development and how it benefits an area?

Answer:Watershed development is the conservation, recharging and judicious use of the water resources like, underground water, rivers etc. and lands within the watershed area.Benefits of watershed development in an area:(i) It makes the land fertile and supports the growth of trees, plants and cultivation.(ii) Help in the preservation of water and its resources.(iii) Prevents soil errosion .