The document NCERT Solutions - Chapter 6 : Anatomy of Flowering Plants, Class 11, Biology | EduRev Notes is a part of the UPSC Course NCERT Textbooks (Class 6 to Class 12).
All you need of UPSC at this link: UPSC

Ques 1: State the location and function of different types of meristem.Ans: Meristems are specialised regions of plant growth. The meristems mark the regions where active cell division and rapid division of cells take place. Meristems are of three types depending on their location.

It is present between the masses of mature tissues present at the bases of the leaves of grasses. It helps in the regeneration of grasses after they have been grazed by herbivores. Since the intercalary meristem and the apical meristem appear early in a plant’s life, they constitute the primary meristem.

Ques 2: Cork cambium forms tissues that form the cork. Do you agree with this statement? Explain.Ans: When secondary growth occurs in the dicot stem and root, the epidermal layer gets broken. There is a need to replace the outer epidermal cells for providing protection to the stem and root from infections. Therefore, the cork cambium develops from the cortical region. It is also known as phellogen and is composed of thin walled rectangular cells. It cuts off cells toward both sides.The cells on the outer side get differentiated into the cork or phellem, while the cells on the inside give rise to the secondary cortex or phelloderm. The cork is impervious to water, but allows gaseous exchange through the lenticels. Phellogen, phellem, and phelloderm together constitute the periderm. Ques 3: Explain the process of secondary growth in stems of woody angiosperm with help of schematic diagrams. What is the significance?

The secondary growth in plants increases the girth of plants, increases the amount of water and nutrients to support the growing number of leaves, and also provides support to plants.Ques 4: Draw illustrations to bring out anatomical difference between(a)Monocot root and dicot root(b)Monocot stem and dicot stem 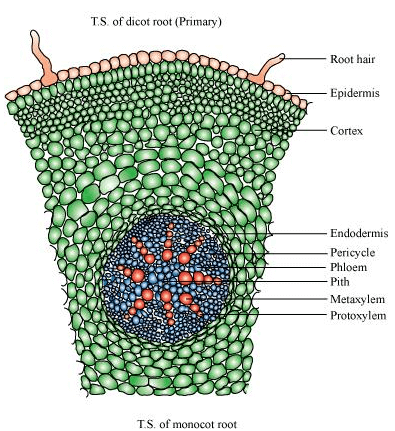 (b) Monocot stem and dicot stem Ques 5: Cut a transverse section of young stem of a plant from your school garden and observe it under the microscope. How would you ascertain whether it is a monocot stem or dicot stem? Give reasons.

Ans: The dicot stem is characterised by the presence of conjoint, collateral, and open vascular bundles, with a strip of cambium between the xylem and phloem. The vascular bundles are arranged in the form of a ring, around the centrally-located pith. The ground tissue is differentiated into the collenchyma, parenchyma, endodermis, pericycle, and pith. Medullary rays are present between the vascular bundles. 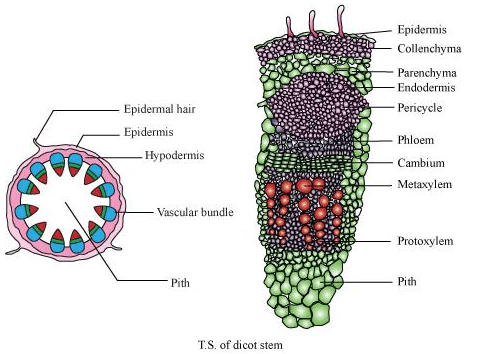 The monocot stem is characterised by conjoint, collateral, and closed vascular bundles, scattered in the ground tissue containing the parenchyma. Each vascular bundle is surrounded by sclerenchymatous bundle-sheath cells. Phloem parenchyma is absent and water-containing cavities are present.

Ques 6: The transverse section of a plant material shows the following anatomical features, (a) the vascular bundles are conjoint, scattered and surrounded by clerenchymatous undle sheaths (b) phloem parenchyma is absent. What will you identify it as?

Ans: The monocot stem is characterised by conjoint, collateral, and closed vascular bundles, scattered in the ground tissue containing the parenchyma. Each vascular bundle is surrounded by sclerenchymatous bundle-sheath cells. Phloem parenchyma and medullary rays are absent in monocot stems.Ques 7: Why are xylem and phloem called complex tissues?

Ans: Xylem and phloem are known as complex tissues as they are made up of more than one type of cells. These cells work in a coordinated manner, as a unit, to perform the various functions of the xylem and phloem. Xylem helps in conducting water and minerals. It also provides mechanical support to plants. It is made up of the following components:

Tracheids (xylem vessels and xylem tracheids)Xylem parenchymaXylem fibresTracheids are elongated, thick-walled dead cells with tapering ends. Vessels are long, tubular, and cylindrical structures formed from the vessel members, with each having lignified walls and large central cavities. Both tracheids and vessels lack protoplasm. Xylem fibres consist of thick walls with an almost insignificant lumen. They help in providing mechanical support to the plant. Xylem parenchyma is made up of thin-walled parenchymatous cells that help in the storage of food materials and in the radial conduction of water. Phloem helps in conducting food materials. It is composed of:Sieve tube elements

Companion cellsPhloem parenchymaPhloem fibresSieve tube elements are tube-like elongated structures associated with companion cells. The end walls of sieve tube elements are perforated to form the sieve plate. Sieve tube elements are living cells containing cytoplasm and nucleus. Companion cells are parenchymatous in nature. They help in maintaining the pressure gradient in the sieve tube elements. Phloem parenchyma helps in the storage of food and is made up of long tapering cells, with a dense cytoplasm. Phloem fibres are made up of elongated sclerenchymatous cells with thick cell walls.Ques 8: What is stomatal apparatus? Explain the structure of stomata with a labelled diagram.Ans: Stomata are small pores present in the epidermis of leaves. They regulate the process of transpiration and gaseous exchange. The stomatal pore is enclosed between two bean shaped guard cells. The inner walls of guard cells are thick, while the outer walls are thin. The guard cells are surrounded by subsidiary cells. These are the specialised epidermal cells present around the guard cells. The pores, the guard cells, and the subsidiary cells together constitute the stomatal apparatus.

Ques 9: Name the three basic tissue systems in the flowering plants. Give the tissue names under each system.

Ques 10: How is the study of plant anatomy useful to us?

Ans: The study of plant anatomy helps us to understand the structural adaptations of plants with respect to diverse environmental conditions. It also helps us to distinguish between monocots, dicots, and gymnosperms. Such a study is linked to plant physiology. Hence, it helps in the improvement of food crops. The study of plant-structure allows us to predict the strength of wood. This is useful in utilizing it to its potential. The study of various plant fibres such as jute, flax, etc., helps in their commercial exploitation.Ques 11: What is periderm? How does periderm formation take place in dicot stem?Ans: Periderm is composed of the phellogen, phellem, and phelloderm. During secondary growth, the outer epidermal layer and the cortical layer are broken because of the cambium. To replace them, the cells of the cortex turn meristematic, giving rise to cork cambium or phellogen. It is composed of thin-walled, narrow and rectangular cells. Phellogen cuts off cells on its either side. The cells cut off toward the outside give rise to the phellem or cork. The suberin deposits in its cell wall make it impervious to water. The inner cells give rise to the secondary cortex or phelloderm. The secondary cortex is parenchymatous.Ques 12: Describe the internal structure of a dorsiventral leaf with the help of labelled diagrams.

Ans: Dorsiventral leaves are found in dicots. The vertical section of a dorsiventral leaf contains three distinct parts.[1] Epidermis:Epidermis is present on both the upper surface (adaxial epidermis) and the lower surface (abaxial epidermis). The epidermis on the outside is covered with a thick cuticle. Abaxial epidermis bears more stomata than the adaxial epidermis.[2] Mesophyll:Mesophyll is a tissue of the leaf present between the adaxial and abaxial epidermises. It is differentiated into the palisade parenchyma (composed of tall, compactly-placed cells) and the spongy parenchyma (comprising oval or round, loosely-arranged cells with inter cellular spaces). Mesophyll contains the chloroplasts which perform the function of photosynthesis.[3] Vascular system:The vascular bundles present in leaves are conjoint and closed. They are surrounded by thick layers of bundle sheath cells.