The document NCERT Solutions - Open Economy Macroeconomics Commerce Notes | EduRev is a part of the UPSC Course NCERT Hindi Textbooks (Class 6 to Class 12).
All you need of UPSC at this link: UPSC

Question 1: Differentiate between balance of trade and current account balance.Answer: 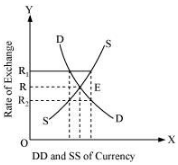 Question 8:Would the central bank need to intervene in a managed floating system? Explain why.Answer: Managed floating system is a combination of two systems − fixed and floating exchange rate systems. It calls for the government or central bank to intervene when the need for the same is needed. The government or the central bank helps in moderating the exchange rate movements by purchasing and selling of foreign currency. Thus, to avoid dirty floating, the government exercises its power to intervene, whenever the need arises.Question 9: Are the concepts of demand for domestic goods and domestic demand for goods the same?Answer: In a closed economy, the demand for domestic goods and domestic demand for goods are similar terms. However, in an open economy, these two terms have different meanings. Demand for domestic goods includes both domestic and foreign demand for domestic goods. Whereas, domestic demand for goods refers to the domestic market demand of a country, that is either produced domestically or abroad (foreign countries).Question 10: What is the marginal propensity to import when M = 60 + 0.06Y? What is the relationship between the marginal propensity to import and the aggregate demand function?Answer: Marginal propensity to import is the fraction of additional income spent on imports.It is given that M = 60 + 0.06YTherefore, marginal propensity to import (m) = 0.06. It reflects induced imports; that is the part of the total imports, which is a function of income.Since the marginal propensity to import negatively affects the aggregate demand function, when income increases the aggregate demand decreases. This is because the additional income is spent on foreign goods and not on domestic products.Question 11: Why is the open economy autonomous expenditure multiplier smaller than the closed economy one?Answer: In case of a closed economy, equilibrium level of income is given byY = C + cY + I + GOr, Y − cY = C + I + GOr, Y (1 − c) = C + I + G 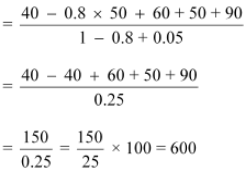 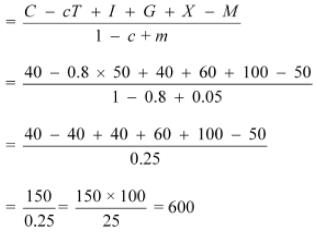 or, NX = Y − C − T + T − G −Ior, NX = Y − C − G − Ior, G = Y − C − I − NXor, G − T = Y − C − I − NX − T    [Subtracting T from both sides]or, G − T = Y − C − T − I − NXor, G − T = (SP − I) − NXNote : There is a misprint in the question as the equation mentions Sg  instead of SP. The correct equation is G − T = (SP − I) − NX.Question 16: If inflation is higher in country A than in Country B, and the exchange rate between the two countries is fixed, what is likely to happen to the trade balance between the two countries?Answer: Country A has a higher inflation than country B. Since, the exchange rate is fixed, it is advantageous for country B to export goods to country A. Similarly, it is advantageous for country A to import goods from country B. On the other hand, it would be expensive for country A to export goods to country B. Thus, country A will have trade deficit as it will import more goods as compared to exports, from country B. Country B will import less goods as compared to exports, from country A. Hence, there is a trade surplus in country B.Question 17: Should a current account deficit be a cause for alarm? Explain.Answer: Current account deficit is the excess of total imports of goods, services and transfers over total exports of goods, services and transfers. This situation makes a country debtor to the rest of the world. But, this cannot be always treated as a cause for alarm because countries might be running in deficits (current account) to increase productivity and exports in future. Also, more investment will help in building capital stock, which in future will lead to rise in output.Question 18: Suppose C = 100 + 0.75Y D, I = 500, G = 750, taxes are 20 per cent of income, X = 150, M = 100 + 0.2Y. Calculate equilibrium income, the budget deficit or surplus and the trade deficit or surplus.Answer:
C = 100 + 0.75YDI = 500G = 750X = 150M = 100 + 0.2YOr, Y = 100 + .75

= 150 − 100 − 466.66= 150 − 566.66= − 416.66Since NX is negative, it implies trade deficit.Question 19: Discuss some of the exchange rate arrangements that countries have entered into to bring about stability in their external accounts.Answer: To combine the two extreme positions, `fixed’ and ‘flexible’, the following exchange rate arrangements are used by governments to bring stability in external accounts:1. Wider BandsA system that allows adjustment in fixed exchange rate is referred to as wider bands. It permits only 10% variation between the currencies of any two countries. For example, a country can improve its balance of payments (BoP) deficit by depreciating it’s currency, which leads to increase in demand for domestic goods due to increase in purchasing power of other currencies. This further leads to the increase in exports, hence improving the BoP.2. Crawling PegCrawling peg system allows continuous and regular adjustments in the exchange rate. Only 1% of variation is allowed at a time.3. Managed floatingManaged floating is a scheme under which government can intervene to vary the exchange rate when the situation demands so. There is no specific limit of variation as in crawling peg and wider bands.