Kingdoms Kings And An Early Republic

Q1. State whether true or false:

(a) Rajas who let the ashvamedha horse pass through their lands were invited to the sacrifice.

(b) The charioteer sprinkled sacred water on the king.

(c) Archaeologists have found palaces in the settlements of the janapadas.

(d) Pots to store grain were made out of Painted Grey Ware.

(e) Many cities in mahajanapadas were fortified.

Q2. Fill in the chart given below with the terms: hunter-gatherers, farmers, traders, crafts persons, herders. 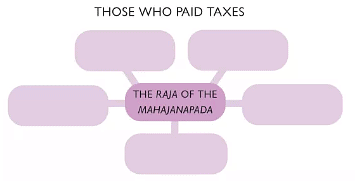 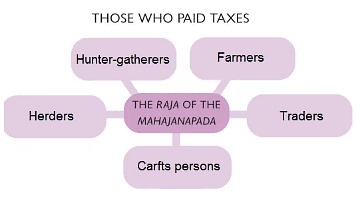 Q3. Who were the groups who could not participate in the assemblies of the ganas?

Answer: Women, dasas, kammakaras are the groups who could not participate in the assemblies of the ganas.

Q4. Why did the rajas of mahajanapadas build forts?

Answer: The rajas of mahajanpadas built forts to protect their people from outside attack, to show their power. Also, the land and the people living inside the fortified area could be controlled more easily by the rajas.

Q5. In what ways are present-day elections different from the ways in which rulers were chosen in janapadas?

Answer: In present day, leaders are chosen through vote given by the citizen of a country while in janpadas, the rulers had to perform sacrifices such as ashvamedha or horse sacrifice to became raja.