The document NCERT Solutions - My Childhood Notes | Study English Class 9 - Class 9 is a part of the Class 9 Course English Class 9.
All you need of Class 9 at this link: Class 9 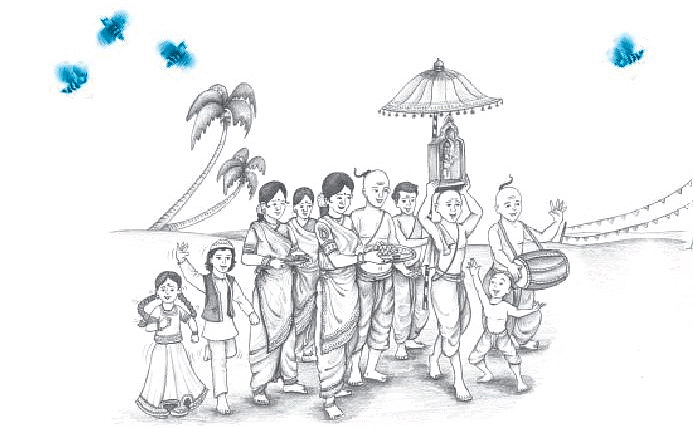 I. Answer these questions in one or two sentences each.Q1. Where was Abdul Kalam’s house?Ans: Abdul Kalam’s house was on Mosque Street in Rameswaram.
Q2. What do you think Dinamani is the name of? Give a reason for your answer.
Ans: Dinamani is the name of a local newspaper. It is so because Kalam traced the stories of the war in the head lives in Dinamani.
Q3. Who were Abdul Kalam’s school friends? What did they later become?
Ans:
Q4. How did Abdul Kalam earn his first wages? Ans:
Q5. Had he earned any money before that? In what way?Ans:
II. Answer each of these questions in a short paragraph (about 30 words).
Q1. How does the author describe(a) His father(b) His mother(c) Himself?Ans: (a)
(b)
(c)
Q2. What characteristics does he say he inherited from his parents?Ans: He says that he inherited honesty and self-discipline from his father. He further says that he inherited faith in goodness and deep kindness from his mother.
III. Discuss these questions in class with your teacher and then write down your answers in two or three paragraphs each.
Q1. “On the whole, the small society of Rameswaram was very rigid in terms of the segregation of different social groups,” says the author.(a) Which social groups does he mention? Were these groups easily identifiable (for example, by the way they dressed)?
Ans:
(b) Were they aware only of their differences or did they also naturally share friendships and experiences? (Think of the bedtime stories in Kalam’s house; of who his friends were; and of what used to take place in the pond near his house.)
Ans:
(c) The author speaks both of people who were very aware of the differences among them and those who tried to bridge these differences. Can you identify such people in the text?Ans.
(d) Narrate two incidents that show how differences can be created, and also how they can be resolved. How can people change their attitudes?Ans:
Q2. (a) Why did Abdul Kalam want to leave Rameswaram?(b) What did his father say to this?(c) What do you think his words mean? Why do you think he spoke those words?Ans:(a) Kalam wanted to leave Rameswaram for further studies. He wanted to study at the district headquarters in Ramanathapuram.(b)
(c)
Thinking about LanguageI. Find the sentences in the text where these words occur

Look these words up in a dictionary which gives examples of how they are used.Now answer the following questions.Q1. What are the things that can erupt? Use examples to explain the various meanings of erupt. Now do the same for the word surge. What things can surge?Ans: A few things that can erupt are anger, volcano, tooth, rash, riots, unrest, etc.  Erupt has several meanings. Their explanation, with examples, is given as follows:

Things that can surge are pride, anxiety, waves, boats, army, etc.The several meanings it has can be explained with the following examples:

Page No. 76
II. Q1. Match the phrases in Column A with their meanings in Column B.

Q2. Study the words in italics in the sentences below. They are formed by prefixing un – or in – to their antonyms (words opposite in meaning).

Now form the opposites of the words below by prefixing un- or in-. The prefix in- can also have the forms il-, ir-, or im- (for example: illiterate –il + literate, impractical –im + practical, irrational – ir + rational). You may consult a dictionary if you wish.