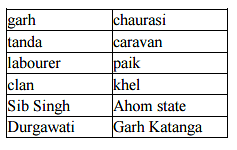 (a) The new castes emerging within varnas were called ____.

(a) The new castes emerging with in varnas were called jatis.

(b) Buranjis were historical works written by the Ahoms.

(c) The Akbar Nama mentions that Garha Katanga had 70,000 villages.

(d) As tribal states became bigger and stronger, they gave land grants to poets and scholars.

Q3. State whether true or false:

(b) There were no tribal communities in the north-western part of the subcontinent.

(d) The Bhils lived in the north-eastern part of the subcontinent.

Q4. What kinds of exchanges took place between nomadic pastoralists and settled agriculturists?

Answer Nomadic pastoralists exchanged wool and ghee with settled agriculturists in return for grain, cloth, utensils and other products.

Q5. How was the administration of the Ahom state organised?

Administration of the Ahom state:

(i) The administration was centralised during first half of the 17th century.

(ii) The Ahom state depended upon forced labour to work for the state and were called paiks.

(iii) Almost all adult males served in the army during war and in other times, they were engaged in building dams, irrigation systems and other public works.

(v) The peasant was given land by his village community and even king could not take it away withouth the permission of the community.

(i) Smaller castes or jatis emerged within varnas.

(ii) Many tribes and social groups were taken into caste-based society and given the status of jatis.

(iii) Jatis became the basis for organising society instead of varna.

(iv) Specialised artisans, smiths, carpenters and masons were also recognised as separate jatis by the Brahmanas.

Q7. How did tribal societies change after being organised into a state?

Changes in tribal societies after being organised into a state:

(i) With the support of the Brahmanas, many tribes became part of the caste system.

(iii) Many dominant tribes of Punjab, Sindh and the North-West Frontier had adopted Islam.

(iv) Some became politically powerful and conflicted with larger and more complex kingdoms and empires.

Q8. Were the Banjaras important for the economy?

Banjaras were important for the economy as:

(i) They were the most important trader-nomads.

(ii) They were used to transport grain to the city markets.

(iii) They buy grain where it is cheaply available and carry it to places where it is dearer.

(iv) Sometimes they were hired by big merchants and trade for them.

(v) They carried grain on their bullocks from different areas and sold it in towns and also transported food grain for the Mughal army during military campaigns.

Q9. In what ways was the history of the Gonds different from that of the Ahoms? Were there any similarities?

(i) Gonds lived in a vast forested region called Gondwana while the Ahoms migrated to the Brahmaputra valley from present-day Myanmar.

(iii) Gonds were completely annexed by Mughal empire while the Ahoms got defeated by the Mughals but direct control over the region could not last long.

(i) In both have administration was centralised.

(ii) Both were smaller tribe who grew annexed neighbouring small societies and got power. (iii) Both the societies were divided into clans or jatis.