The document NCERT Solutions(Part - 1) - Data Handling Class 6 Notes | EduRev is a part of the Class 6 Course Mathematics (Maths) Class 6.
All you need of Class 6 at this link: Class 6

In a Mathematics test, the following marks were obtained by 40 students. Arrange these marks in a table using tally marks. 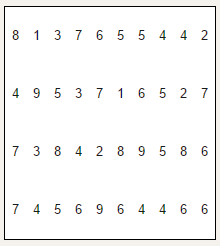 (a) Find how many students obtained marks equal to or more than7.

(b) How many students obtained marks below 4?

Following is the choice of sweets of 30 students of Class VI.

(a) Arrange the names of sweets in a table using tally marks.

(b) Which sweet is preferred by most of the students?

Catherine threw a dice 40 times and noted the number appearing each time as shown below: Make a table and enter the data using tally marks. Find the number that appeared.

(a) The minimum number of times

(b) The maximum number of times

(c) Find those numbers that appear an equal number of times.

Following pictograph shows the number of tractors in five villages.

Observe the pictograph and answer the following questions:

(i) Which village has the minimum number of tractors?

(ii) Which village has the maximum number of tractors?

(iii) How many more tractors village C has as compared to village B.

(iv) What is the total number of tractors in all the five villages?

The number of girl students in each class of a co-educational middle school is depicted by the pictograph:

Observe this pictograph and answer the following questions:

(a) Which class has the minimum number of girl students?

(c) How many girls are there in Class VII?

The sale of electric bulbs on different days of a week is shown below:

Observe the pictograph and answer the following questions:

(a) How many bulbs were sold on Friday?

(b) On which day were the maximum number of bulbs sold?

(c) On which of the days same number of bulbs were sold?

(d) On which of the days minimum number of bulbs were sold?

(e) If one big carton can hold 9 bulbs. How many cartons were needed in the given week?

(c) Same number of bulbs (8) were sold on Wednesday and Saturday.

(d) Then minimum number of bulbs (8) were sold on Wednesday and Saturday.

In a village, six fruit merchants sold the following number of fruit baskets in a particular season:

Observe this pictograph and answer the following question:

(a) Which merchant sold the maximum number of baskets?

(b) How many fruit baskets were sold by Anwar?

(c) The merchants who have sold 600 or more number of baskets are planning to buy a godown for the next season. Can you name them?

Question 1: Total number of animals in five villages are as follows:

Prepare a pictograph of these animals using one symbol to represent 10 animals and answer the following questions:

(a) How many symbols represent animals of village E?

(b) Which village has the maximum number of animals?

(c) Which village has more animals: village A or village C?

(c) Village C has more animals than Village A

A. Prepare a pictograph of students using one symbol

to represent 100 students and answer the following questions:

(a) How many symbols represent total number of students in the year 2002?

(b) How many symbols represent total number of students for the year 1998?

B. Prepare another pictograph of students using any other symbol each representing 50 students. Which pictograph do you find more informative?

(b) Five completed and one incomplete.

Pictograph B is more informative than A.

The bar graph given alongside shows the amount of wheat purchased by government during the year 1998-2002. Read the bar graph and write down your observations. In which year was

(a) the wheat production maximum?

(b) the wheat production minimum?

Observe this bar graph which is showing the sale of shirts in a ready made shop from Monday to Saturday. 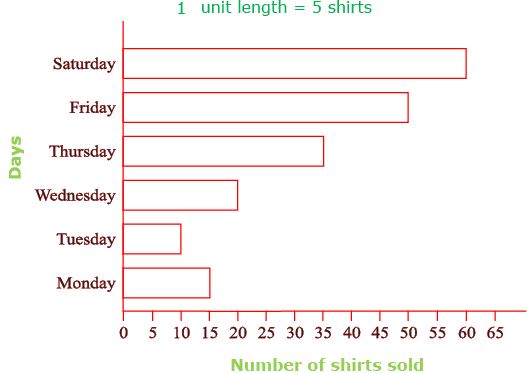 (a) What information does the above bar graph give?

(b) What is the scale chosen on the horizontal line representing number of shirts?

(c) On which day was the maximum number of shirts sold? How many shirts were sold on that day?

(d) On which day was the minimum number shirts sold?

(e) How many shirts were sold on Thursday?

(a) The bar graph shows the sale of shirt in a readymade shop from Monday to Saturday.

(c) On Saturday, maximum number of shirts, 60 shirts were sold.

(d) On Tuesday, minimum number of shirts were sold.

Observe this bar graph which shows the marks obtained by Aziz in half-yearly examination in different subjects. Answer the given questions.

(a) What information does the bar graph give?

(b) Name the subject in which Aziz scored maximum marks.

(c) Name the subject in which he has scored minimum marks.

(d) State the name of the subjects and marks obtained in each of them.

(a) The bar graph shows the marks obtained by Aziz in half yearly examination in different subjects.